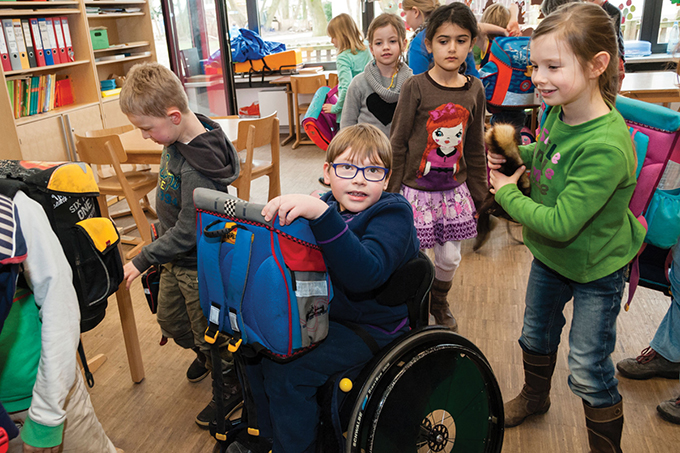 The aim of inclusive school is to enable all pupils “whatever their disabilities and difficulties” to learn and to have “an equal chance” of succeeding ( Unesco ). For several years, we can see a strong political will for the establishment of this school both internationally and nationally .

“The student with a disability is a student like the others. With the necessary adjustments and adaptations, he must have access to the same knowledge and be subject to the same requirements ”.

Despite this strong political will, it is clear that many obstacles persist. The difficulty in implementing inclusive education can be explained by many variables such as, for example, the teachers’ weak feeling of competence , their lack of training or the lack of perceived support from the institution.

The inclusion of pupils with special educational needs can legitimately be questioned in its aims. In fact, inclusive education emphasizes, in its fundamental principles, the values of equity and social justice.

But is inclusive education achieving its goal? In other words, does it really allow pupils with special needs to learn like the others? Does it also allow ordinary students to learn in the best conditions?

A meta-analysis, i.e. an exhaustive synthesis of the results of the scientific literature, carried out by Ruijs and Peetsma in 2009, tends to show that, in general, inclusion has positive effects (in the most studies), or neutral on the cognitive development of students with special educational needs. In other words, their inclusion in ordinary class allows them, in most cases, to further develop their learning. Sometimes this positive effect is not found, but inclusion does not affect their learning.

This meta-analysis also looked at the effects of inclusion on the socio-emotional development of students with disabilities, such as self-confidence or the quality of social relationships. On this point, the analysis did not allow any conclusions to be drawn. To explain the lack of consensus in the studies, the authors point out the unequal efficiency of inclusive pedagogies in the classes.

Indeed, teachers are not all prepared for inclusion and certain unsuitable practices can cause students with special educational needs to feel marginalized: lack of interaction with other students, inappropriate support and therefore difficulty with tasks, negative evaluation, etc. Other, more suitable practices can, on the contrary, promote socio-emotional development.

Progress in reading and writing

A study by Sermier and his collaborators shows contrasting effects depending on the skills worked. These authors were interested in the effects of inclusion in the regular classroom on the progress of Swiss students with intellectual disabilities. To do this, two groups of children – similar in terms of age, IQ, socio-economic status and academic performance before the study – were compared:

These students were followed for two years, and their academic performance was evaluated three times over this period. The results indicate that students included in mainstream class made more progress in reading, written expression, vocabulary, spelling and grammar than students in special class. On the other hand, the two groups showed a similar progression in mathematics.

Other studies have also shown that the number of hours of inclusion in mainstream class has an effect on learning: the more pupils are enrolled in mainstream class, the higher their scores on language and mathematics assessments.

If inclusion can only be beneficial for students with special educational needs, what about ordinary students? A meta-analysis of 47 studies carried out in Europe, the United States, and Canada shows that inclusion has a small, but overall positive effect on the learning of ordinary students. It also indicates that the positive effect is more pronounced in the United States and Canada than in Europe.

According to the authors, this result can be explained on the one hand, by the implementation of more recent inclusive education in Europe, and on the other hand, by different conceptions of the concept of inclusion. In fact, in Europe, inclusion is rather perceived as a form of instruction adapted to pupils with special educational needs, while in the United States and Canada, it is seen as a way of transforming the school.

The effect of inclusion on the socio-emotional skills of ordinary students has been the subject of very limited investigation. However, it would appear that ordinary students in an inclusive class are less prejudiced towards students with disabilities, are more likely to play with them, and have more positive attitudes towards them.

These different studies tend to show that inclusion is at best beneficial for students, at worst does not harm their acquisitions. The pursuit of inclusive education in our country therefore seems to be a good thing for students with special educational needs but also for ordinary students. It offers a real public education service to all students.

Author Bio: Caroline Desombres is Professor of social psychology at the University of Lille