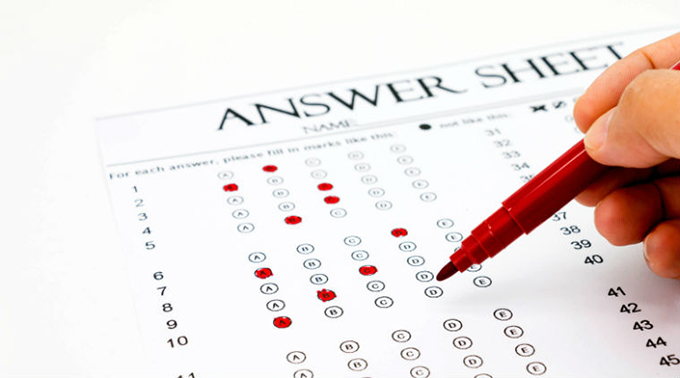 The edu-fascists running so many of our schools are predictable. The educationists want growth at all costs, while the Progressives want to advance their destructive ideology at all costs.

Entrance exams, what used to be a gatekeeper for getting in to higher education, have long been abandoned at many of our open admissions state schools. This was done to “loosen restrictions” (as an educrat would say) or “promote diversity” (as a Progressive would say), but bottom line this was done as it coincided with both sides’ interests. That it was destroying the citizens/unqualified students with unpayable student loan debt was of no concern to either side, of course.

Our elite schools still require students to demonstrate some actual interest in learning before taking on student loan debt, but this has been changing of late as they, too, have been taken over by the same sort of people. A recent Taki’s Magazine article discusses the “problems” with entrance examinations as written about in a book on the subject, but misses one big detail, which I’ll correct.

One of the less remarked-upon gender gaps is in college attendance: Young men have fallen far behind young women. Males now make up only 43 percent of college students despite continuing to earn slightly higher average scores on college admission tests.

One way “opportunities were expanded” and “equality was achieved” (depending on which faction was lying talking) in higher education was encouraging females to pursue higher education en masse. Basic human biology makes this a bit problematic, but I just want to point out the main issue here demonstrating both sides are full of crap: although females greatly outnumber males on campus and have done so for years, although more females today hold college degrees than males…there’s still an endless push to attract even more females on campus. One side really only wants growth no matter what harm is done, while the other wants to pursue ideology with similar unconcern for humanity.

Perversely, journalist Paul Tough’s much-praised new book, The Years That Matter Most: How College Makes or Breaks Us, calls for America to worsen this inequality by dumping the SAT and ACT for being biased toward boys.

This is all part of the push to destroy the few good schools which still require entrance exams. Please understand anyone who wants to enter an open admissions school can do so already, we have a surplus of “higher education” available in this country. We don’t have a surplus of legitimate schools, however.

While the above is “merely” a claim that entrance exams are sexist, it’s a single sling of mud away from calling them RACIST as well:

Why bring up “white”? One big open question comes to mind about our society as I read this: what will we collectively tire of first: the jailhouse “suicides” of people about to testify against our big politicians, or the cries of RACISM against everything which made our society?

One important fact that Tough points out is that prestigious colleges have vastly more money to spend per student than do less famous colleges.

The above is where the article goes wrong, and it spends far too much time railing against those wealthy private schools which restrict admission. It might be a “fact,” but it needs to be clarified with the well known fact that “money spent per student” has almost no effect on outcome, as has been shown time and time again. Honest, you give me the lowest amount spent per student anywhere in the U.S., and give me the top 10% of scorers on entrance exams, and I promise you I’ll have more success with them than any amount of money spent on the bottom 10%.

At least the article laughs at the implied racism of our elite schools using such exams:

These students were more likely to live in small towns or rural areas in the middle of the country and to attend schools where they would be one of only a few high-achieving students. They were also significantly more likely to be white; 80 percent of them, in fact, were white, compared to just 45 percent of the achievement typical students.

In other words, this country’s most underprivileged reservoir of underutilized talent is Red State white boys.

While the above is accurate, the edu-fascists running our schools will ignore this detail, instead targeting the much broader market of low performing, “diverse” students.

Tough, for example, is much agitated about the inevitable fact that some college applicants have higher test scores than grades while others have higher grades than test scores. He tendentiously labels the former “inflated SAT score students,” although one might with equal justification call the latter “inflated GPAs.”

How twisted is that? The whole point of standardized tests is they have standards. Taki’s is right to laugh at this inversion of truth, but the book referenced will still be used to eliminate standardized tests. Because the book is published and supports the narrative, after all.

There’s considerable idiocy to unpack in the above, so I’ll only go lightly over the “problems” here, which the article doesn’t really touch on.

The SAT tests are basically used as a proxy for intelligence tests; any group scoring high in one is scoring high on the other. Of course, intelligence tests were long since branded as RACIST and discarded. I assure the gentle reader, once the SAT receives this treatment, another proxy will be found. The market is like that, after all.

Having parents with graduate degrees just means the kids come from a family which values education…so, much as children of obese parents tend to be obese, we see the same thing here. And? I know talking about “genetics” is RACIST as well, but we all know, deep in our hearts, that children tend to take after their parents.

The book gets another shredding, as the article points out how an important fact “not supporting the narrative” isn’t mentioned:

Of course, that’s because, on average, rich kids attend schools with more rigorous grading standards than do not-rich kids.

–emphasis added. Honest, you ask more from students, you get more.

Another issue commonly raised against the rich is they can afford to spend more money on test prep for their students. There’s some truth to this, and I’ll be the first to admit that preparing for a test is a great thing to do, and purchasing materials helps quite a bit.

A short anecdote: I doubled my subject test score (more accurately, my percent rank) for the GRE mathematics subject test after buying a test prep book. I went to a weak State U with a reputation for partying, and learned I had catching up to do based on that prep book. The book cost $18, but I had to study it on my own. Yes, I had my “rich” parents spend the money on it (if memory serves), but comparable books are available today for about the same price (if by “book” you mean “PDF,” anyway).

Yes, spending money helps, but my parents weren’t going to help me with the material, it was on me to study and learn. That’s how it works, and how it always works, greed and ideology notwithstanding.

The book rails quite a bit against test prep, but it really is all about the effort:

Of course, Asians get, by far, the highest test scores of all, and have been widening the gap in this century. But Asians don’t come up all that much in The Years That Matter Most. They tend to confuse The Narrative.

Of course they don’t fit the narrative, that’s why they never get mentioned..,and the gap is widening because they’re preparing even harder than before in response to the racist rules Progressives stack against them . As I’ve shown time and again, Asians are more a minority than what the ideologues call minorities…and so get swept under the rug since they don’t support the narrative.

Facts are irrelevant to the people running our schools, of course, and so more legitimate schools will turn into open admissions schools, scraping up that last bit of student loan money before we finally figure out that there’s simply too much going wrong in our higher education system to keep supporting it this way.