One of the weird things about higher education is how the smart people are fleeing it. Now, that’s at the grad school level, and I noticed it seemed to start just about the time I was done with graduate school: my most talented friends were getting their Ph.D.s, seeing what higher education had to offer, and decided an academic career was a terrible idea. They headed to the “real world” never to do anything for education or research. It takes brilliance and character to conceive “the four years spent getting a Ph.D. was a waste, and I need to do something different,” and walk away from all that hard work. I acknowledge my error here.

That’s my anecdotal evidence regarding the really smart people (although I’m not alone in seeing it), but what of the rank and file college student? What’s been happening there? A helpful chart answers the question: 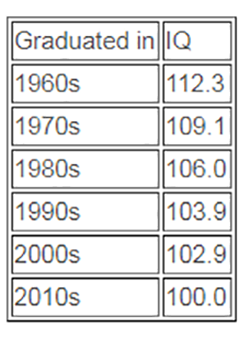 It may only seem like a few points every decade, but in terms of statistics, there’s much to be said about this chart.

In the olden days, companies would give “aptitude tests” to people they might possibly hire. This was a perfectly reasonable thing to do, as the company would invest considerable resources into training an employee. Thus they were quite motivated to make sure the employee was “apt,” able to learn the skills the company needs.

There were complaints that these aptitude tests were RACIST, and so companies that used them opened themselves up to huge lawsuits from a government with infinitely deep pockets to pay for the lawyers to file such lawsuits. Companies not wanting to fight such an impossible battle got rid of the tests.

The government forced aptitude tests to disappear but companies still wanted some way to tell if a person would be able to learn the work they were going to train for. What to do? Well, the government generously allowed companies to restrict hiring to “college graduates,” i.e., hiring to only people who had a government-granted certification of aptness.

Say, does anyone else see a conflict of interest in government forcing people to not use anything but government to determine something? Let’s see how the Law of Unintended Consequences works out here.

My first job: I was a computer programmer at HBO.

I was so bad that they had to send me to REMEDIAL school for two months to learn enough about computer programming to be as good as their WORST programmer.

Thus it came to pass that having a college degree became a “gateway” into the middle class, unlike in the past where simple talent and skills were enough. The funny thing is, a college degree as it is today doesn’t really help companies much. Even if you have a very specific skills degree like “Computer Programming,” if a company hires you, you’ll likely still have months of training in how to actually program in a way that the company will find useful. The collegiate version of programming focuses on computer languages and skills which went obsolete a decade or more ago (because it takes at least 10 years to set up a college degree program, and anyone who deals with computers knows a decade may as well be 1,000 years for computers…).

While I blame the student loan scam for the immense growth in the size of our campuses, the loans just pay for the degrees…the demand comes because many companies have no other way to restrict their hires beyond requiring a college degree, and the kids are told this nearly every day in school.

Now, let’s look at that chart more carefully, by first considering the variation from each decade, for the first four decades:

You can dispute the validity of intelligence tests in general but you can’t dispute the trend in the above. Certainly you expect to see variation from decade to decade, but when the variation is always in one direction (down), you must suspect it’s not random.

It may look like there’s a bit of convergence, namely that the drop is going to zero, but this is just how probability works—the proportion of people with IQ between, say 109.1 and 112.2 is roughly the same as the proportion between 102.9 and 103.9 even if the latter is a smaller range of numbers.

More simply said, in terms of proportion, every decade we lose about same amount of intelligence in our college graduates. Ok, that still might not be simple enough, but the gist should be clear to the layman: a college degree means way less than it used to in terms of intelligence.

Now, let’s consider the most recent decade, where the drop in IQ is now 2.9. This is a relatively huge drop compared to the previous decade, about 4 times as much in terms of proportion.

In short, we’ve gone from a disturbing but relatively constant drop in the IQ of our college graduates to a very sharp drop.

Today, in terms of intelligence, a college graduate now is simply average. How useful is such a government certification? The price of the degree has gone up dramatically while the usefulness of that degree to employers has dropped even more so, to effectively zero. You could just get a random guy off the street and expect average intelligence, after all.

I’m saddened by the loss of our most intelligent people in graduate school: we’re losing our best and brightest because they’re smart enough to see quickly that higher education is a dying system that would merely exploit them…this does not bode well for humanity, as this will impact the advancement of human knowledge.

Alas, the issues are even bigger than what’s happened in graduate school:

To say we’re well into the territory of diminishing returns is to understate the problem–we’re past the point of negative returns. Most Americans in college today are not benefiting from being there. They’re foregoing work to accrue debt for degrees that, if they increase earning power at all, do so only marginally and they’re picking up an unhelpful sense of entitlement in the process.

While there is truth in the above, I’m more concerned by the suddenly accelerating drop in IQ of our college graduates in the last decade. At this pace, it’s reasonable to conjecture that very soon a college graduate will have below average intelligence. It’ll be perfectly clear then that the smart people aren’t just leaving graduate school, they’re fleeing college in general.

It’s a big problem for humanity that our scholars will no longer represent the smartest people humanity has to offer. It’s a bigger problem for humans that having a college degree will soon mean that you’re of below average intelligence.

If the trend continues, and all evidence says it will, by next decade having a college degree will be telling your employer: “I was stupid enough to get a degree and you should not hire me.”

Once again, we see the Law of Unintended Consequences in action, as turning higher education into a government program to determine who is qualified to have a good job will instead determine who is unqualified.

That our kids are going in debt for a certification of incompetence is insult to the injury. End the student loan scam.