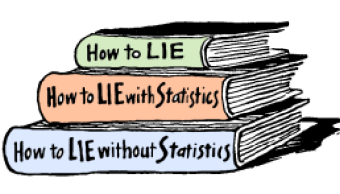 A college degree, at least in theory, takes 4 years to complete, no matter the major. It’s puzzling how there are few questions about why it takes exactly as long to train a hotel manager as an accountant as a kindergarten teacher…it’s one of many questions about higher education that needs asking, but today I want to talk about what all these varied degree programs have in common: general education requirements.

Written into accreditation is a mandate that all college degree programs must contain coursework in certain general education fields. So, all students must take a couple English courses, a couple Math courses, “and so on.” I put that last part in quotes because much of what used to be general education courses that anyone could concede have academic merit and contain knowledge that an educated person should know have been removed, to be replaced with ideological courses that contain very little at all.

Student: “All I learned in my last 2 years of Education courses was how not to get sued by the parents.”

These fake courses needed to replace the more legitimate courses in, say, psychology or science, because of the general structure of most degree programs: 2 years of general education, and 2 years of actual training. While, granted, the “actual training” that goes into some degree programs (hi Education!) is so minimal that getting rid of it and replacing it with (different) fake courses would be harmless enough, legitimate subjects simply cannot remove courses to make way for the latest political fad.

So, students really only have 2 years, no more, to waste on general education coursework. Admin could have kept the legitimate coursework and not used the fake courses, but once they saw the kind of money they could save by getting rid of academics and using the cheap labor force of the fake subject teachers, it was a no brainer.

These fake courses were somewhat justified as an attempt to placate the rowdier students on campus, demanding “social justice” coursework. Insidiously, the fake courses started to warp the few remaining legitimate courses. The fake courses had no coursework in them, all that was demanded was the students agree to the ideology, or watch a few Powerpoints. The fake courses naturally were loved by the students, and entire classes were given perfect scores of “A” (when there are no tests or assignments, this is easy to get).

Admin looked at the “success” rate of the fake courses, and brought the hammer down on the legitimate courses: “If Gender Studies can have 100% retention and 4.0 GPAs awarded, you need to do the same thing in Calculus, or we’ll cut your pay!”

Poo Bah: “[Fake state school] is pleased to announce that any of our graduates not qualified to perform their jobs are granted 2 free full year’s tuition to come here and take more courses.”

–I’m serious, this actually happened. Which part of this is more ridiculous, the fact that the school was graduating incompetents, or the fact that the Poo Bah knew the graduates were so foolish that they’d actually come back for more fake training?

The end result is we’re now commonly producing college graduates that know very little of anything. There’s been some backlash (not enough) against the schools for it but, no, the response won’t be to actually restore standards and remove the fake classes.

Instead, they’re going to double down on more fake classes. They won’t be honest about it:

Institutions across the country have been considering carefully scripted general-education courses in lieu of traditional distribution requirements (see “No Math Required,” “Rethinking Gen Ed” and “Gen Ed Redesigns”). Some months ago, the American Council of Trustees and Alumni issued a report pointing out the efficiencies that would be realized by sequenced general-education courses with prescribed curricula, little student choice and lots of requirements.

Note that the “prescribed curricula” and “carefully scripted” mentioned above will annihilate faculty choice in the courses. Instead, admin will mandate what this new sequence of courses would have in them. I’ve dealt with this many times, and always, admin-designed courses consistently have any material which challenges students removed…standards will be defined down until we get those 100% “A” grades.

I’m not a jerk, of course I want students to do well, and I’ve even had a (small) class or two where all the students received an “A.” But if everyone is to get a college degree, and if everyone is to have a 4.0 GPA…how can we justify charging more for a degree than a glass of water?

I’m quoting a Poo Bah’s post here, and it’s funny how insouciant he is about what’s going on in higher ed:

“…deploring the fact that most college students could not identify James Madison as the father of the U.S. Constitution (most chose Thomas Jefferson) and that 40 percent did not know that Congress has the power to declare war. Their solution: a course on civic literacy required of every college student…”

“…Other groups decry college students’ lack of mathematical and quantitative literacy, of historical knowledge, of basic financial knowledge, and of writing skills. Common to all is the proposed solution: new required courses…”

He uses the administrative destruction of legitimate courses as justification for the bold plan of giving admin more control, but the gentle reader needs to understand that college graduates used to learn things like the above in legitimate courses that covered quantitative literacy, historical knowledge, and so on…but administrative control forced the teachers of the relevant courses to remove more and more material.

Seriously, anyone with half a brain can guess what will happen here:

The push to require courses even comes from student groups. Last semester, I talked with a group of student activists concerned about their classmates’ use of phrases that had been used historically to demean others and the chilling effect of such discourse. Their solution: a course on cultural competence required of every college student.

Does “cultural competence” really have the academic gravitas of “Early American History,” “Accounting,” or “Calculus”? Our campuses have riots because of all the culturally competent ideological garbage on them. The Poo Bah should have explained to the students that higher education’s mission isn’t cultural competence, but knowledge. Oh, wait, that would require the admin to know higher education’s mission.

I grant I’m being a bit hard on the guy, as he clearly suspects something might go wrong with making higher education even more like high school:

I’m not suggesting that colleges and universities should have no requirements. Just as unregulated free markets concentrate capital, unregulated curricula concentrate enrollments. Think massive, entertaining, undemanding lecture courses. But the opposite — centrally planned, highly sequenced curricula with lots of top-down requirements — are precise analogues of Marxist economies. And we all know how those work.

The above said to his credit, it’s still funny that he can’t connect the dot (sic) regarding where the laughable idea of “new college courses to address the topics no longer being addressed in current college courses where such topics used to be addressed” came from, or figure out that the new idea will just put more power over education into admin’s demonstrably unworthy hands.

Still, it’s clear that the public is slowly figuring out just how desolate much of college education is. There’s a hunger for education, but a great deal of what’s going on in college is just empty courses, filled with ideology but little knowledge, and thus unsatisfying in addition to being ridiculously expensive.

Too bad administrators can come up with but one laughable idea to fix the problem. If educators were allowed to help, we’d simply ask to allow us to have standards and cover legitimate material in our classes.

We’d also say to get rid of the fake courses, too.

Trouble is, both such ideas would cut into those sweet, sweet, student loan checks, so admin won’t consider either of them…but if we could shut down the student loan scam, maybe then integrity would be considered?