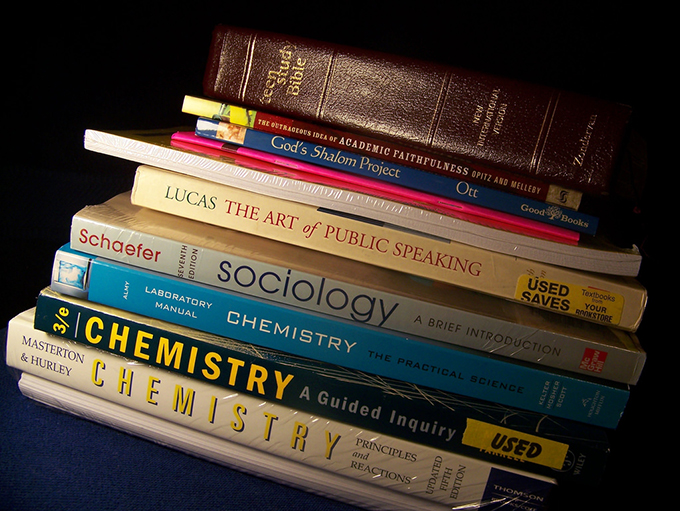 How much money do students spend on college textbooks? The answer is: too much.

Since 1982, the price of new textbooks has tripled even after taking inflation into account. Since 2006, it has outstripped the rate of increase for college tuition. In contrast, the price of recreational books, a rough indicator of the cost of book production, has over roughly the same period fallen by almost 40 percent.

If this market seems unsustainable, it is. It might not be the “Death of Textbooks.” Nevertheless, four things suggest that the textbook market is in the middle of a major shift.

In many ways technology has caused the current price spike. On the most basic level, it has allowed the major textbook publishers, who monopolize textbook production, to churn out new editions at ever faster rates. This means that used copies become obsolete more quickly as instructors demand the most current edition. Textbooks also increasingly come with instructors’ manuals, lecture slides, online computer-graded problem sets, banks of ready-made test questions, and companion websites that come bundled as one product. For busy faculty, such features are appealing as they cut down on time dedicated to course prep. And just to be sure that students cannot collectively buy or resell their course materials, publishers guard them with access codes that prohibit sharing.

Yet even as technology locks students to specific textbook editions, it has also cleared space for resistance. In classes where faculty shun bundles or remain flexible, students can rent books or snag online PDFs of earlier versions from sites like 4shared.com. For non-bundled texts, students often purchase a single textbook – hard copy or electronic – to share. This is an illegal yet common practice.

Professors bypass standard publishing restrictions by putting free materials on course websites. Some dance at the edge of copyright law to create customized readers. Others write their own electronic open-source textbooks. Faculty also draw on large archives like JSTOR and Project Muse, which make academic articles available to college communities.

Textbook publishers have taken advantage of global markets to increase their sales. But again, this push for globalization also complicates sales. The latest edition of “Economics,”by Paul Samuelson and William Nordhaus, lists for US$219.88 from publisher McGraw-Hill and $205.87 from Amazon. Yet this book is priced differently outside of the United States. A copy may be had for 425 rupees ($6.09) in India. In order to compete in large lower-income foreign markets such as China and India, publishers price differently for different markets, producing international editions with identical content at lower prices.

Anyone who hopes to sell the same product at different prices can’t play this game for long. Resourceful students often locate these foreign editions. Similarly, we know firsthand of teachers who ignore the “Not for use in the U.S.” stamp on the title page of an otherwise standard English-language version. Global markets have also helped the sales in the legal used edition market. On Amazon.com buyers can find many listings from U.K. booksellers who can use the weakening pound to undercut U.S. used book dealers.

Due to forces of technology and globalization, prices for college textbooks could start to come down. Daniel M. Ernst/www.shutterstock.com

History shows what is happening now has happened before. When European colleges and universities started in the 12th century, medieval students, like students today, needed texts for their courses. But most students could not afford to buy books – or more accurately, manuscripts, books written by hand that took weeks (if not years) to produce. In the 1380s, a copy of Gratian’s “Decretum,” a standard legal textbook, might have cost around six and a half pounds – somewhere between $10,000 to $100,000 today. Manuscripts were so expensive that students and faculty used them for collateral for loans.

Recognizing their students’ difficulty paying for books, schools built libraries and chained manuscripts to tables or shelves, or locked them in chests for use on the spot. By the mid-13th century, as student populations grew, universities also supported “stationarii,” or in English “stationers.” By law stationers had to keep authorized copies of works used for university courses. Students and instructors could then hire official scribes to copy the parts of these works they needed for a class. Called the “pecia” system, this practice predominated in the 14th and 15th centuries. At the University of Paris, university officials set pecia rates to protect students from being overcharged.

The college textbook market changed in the 15th century with the invention of the printing press. Print did not initially impact book prices. But by the early 16th century, prices began to drop as technological improvements enabled lower-cost mass production. Libraries unchained their books and private collections grew.

The shift to printing reshaped the English book market in particular. Although English printers like William Caxton created a market for luxury books and, eventually, for less expensive volumes, continental printers dominated the academic market. Printers in the Netherlands and Germany had more success at inexpensive large-scale production, and they soon drove Oxford- and Cambridge-based printers out of business.

In sum, technology has frequently changed the textbook market, which was in flux from the moment of its inception.

Change is also coming from universities themselves, which maintain libraries, support thousands of journal subscriptions, and have increasingly encouraged faculty to write and use open-source textbooks.

In the medium run, universities could go even farther by using their buying power to hold down prices, like their early university counterparts. More daringly, Dean Baker of the Center for Economic Policy Research has proposed public-domain textbooks with public financing that would enhance consumer sovereignty and academic freedom.

In the short term, students are finding alternatives such as re-importation and collective ownership. And tomorrow’s students, like their medieval predecessors, just might enjoy more regulated and lower textbook prices than this current generation.

Author Bios:Jenny Adams is an Associate Professor of English and Michael Ash is a Professor of Economics & Public Policy both at the University of Massachusetts Amherst