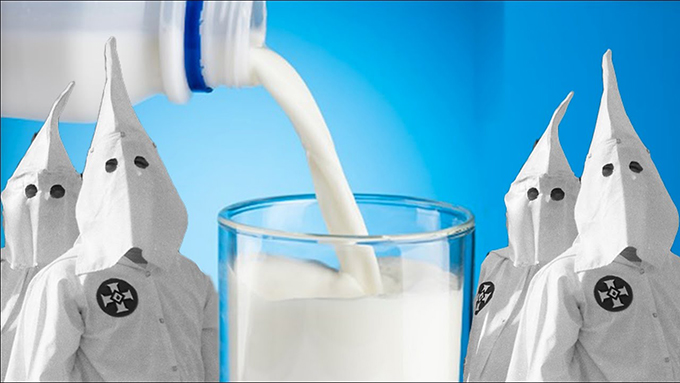 I don’t mean to pick on California, but they just keep making standout innovations in insanity that I feel the need to highlight. Today I see an article from California State University’s Long Beach student paper and…well, let’s just get to it, with the article beginning with the usual claptrap

It may not surprise you that the United States was founded on racism. That every institution we uphold has racist roots that are sometimes difficult to catch and even harder to fight against. This phenomenon affects our voter ID laws, state testing and,  yes, even our federal dietary guidelines. But how can our health guidelines, a system meant to be built upon scientific fact alone, have racist messages? Where there is a deep-rooted tradition to suppress an entire race’s existence, there’s a way.

This whole “everything is racist” mantra just strikes me as completely self-defeating. If it’s all racist, all the time, then it’s pointless to do anything about it. Granted, this point of view means you can constantly complain about everything all the time, and, inevitably, ask for government support. It must be time to complain about milk:

The federal endorsement of milk in American diets contributes to the problem by uncritically pushing people to drink milk, despite the potential detriment it has on non-white people’s health.

Hey, milk has potential detriments to white people’s health, too. I mean, seriously, milk is high in fat (bad for you!), high in calcium (that’s what clogs your arteries), the cows are pumped with hormones to produce milk (some of that has to be passed on to the drinker), and I’m sure I could point out some other problems with it as well. I’m not trying to scare anyone, but milk is the stuff that turns tiny little cows into big fat cows in just a few years…it’s not outrageous to consider the possibility that obesity as well as quite a few other significant health problems affecting Americans could be traced back to excessive milk consumption in the modern way. Unfortunately, when you view everything through the narrow ideological lens so popular on our campus, seeing the big picture is impossible.

Our current federal dietary guidelines urge people to drink three cups of milk a day, according to the 2015-2020 Dietary Guidelines for Americans. The main health benefit of milk is to guard against osteoporosis, a disease that weakens your bones — hence the “stronger bones” rhetoric.

While this is a very practical health benefit, osteoporosis affects Africans at a significantly lower rate than it does most Americans, according to an article on Mother Jones.

Yet the federal government’s dietary recommendations don’t account for such distinctions. And that omission, she says, amounts to something like discrimination. “What has happened is the medical community has universalized the particular biology of [Caucasians],”

Seriously, the racism here is ridiculous. The idea that non-white people (particularly the Africans pointed at by Mother Jones) are so incapable of making decisions for themselves that a blanket recommendation could harm them is just insulting. It’s such a non-issue anyway: the federal guideline (paid for by the milk lobby, I’m sure) is three glasses of milk a day, and I doubt many drink quite that much.

Ok, back to the student piece and it’s railing against the racism of milk:

These seemingly coincidental acts of racism are backed by the way milk continues to be represented in American diets…Remember that this is the dietary guidelines for Americans. I want to emphasize that last word. These guidelines are for Americans.

.     So, um, can white people be Americans? It’s jaw dropping that this sort of stuff gets printed, even in a student newspaper, without someone pointing out obvious flaws.

These differences are now leaving the world of health and spilling into our political and social lives. Milk has now become a symbol of racial superiority for white nationalists and neo-Nazis, claiming that their ability to process milk makes them racially superior.

It’s so weird how the media keeps bringing up Neo-Nazis and white nationalists. Estimates of serious practitioners of neo-Nazism or whatever in the US are 10,000 people or less, at absolute most, country wide. Usually when they have parades and such, only a few hundred people show up. And yet we have endless articles telling us to follow the Leftist ideology, to protect us from these statistically insignificant groups that don’t represent any sort of meaningful threat in any way. You’re more likely to be killed by lightning than by a Neo-Nazi, by many multiples…and yet the incredible dangers of lightning just don’t make the news nearly as often.

Weirdly, the student contradicts herself in her closing “argument”:

And while there is little logic to the train of thoughts involved in choosing the next inanimate face of racism, our country’s health guidelines certainly take part of the blame for this one.

–Emphasis added; realize, she just chose milk as the next inanimate face of racism here. Little logic there, indeed.

She basically admits her whole argument is rubbish. I would go further, and say there is NO logic in her choosing milk as an “inanimate face of racism” (where do they even get such phrases?). How did this article get published?

The most terrifying words in the English language are: I’m from the government and I’m here to help.

It’s not racism, kid, it’s called government, and, I promise you, this isn’t even close to the first time the government has made a decision detrimental to its citizens. The bad advice isn’t racist, it’s just how government works. We shouldn’t continue with the hopeless cause to end racism, as even the “racism hunters” admit, everything is racist, always. On the other hand, we do need to work to reduce government.

Unfortunately, such a concept is complete anathema to those who embrace the “everything is racist” ideology, as they perpetually propose more government solutions to the endless “problem” of racism.