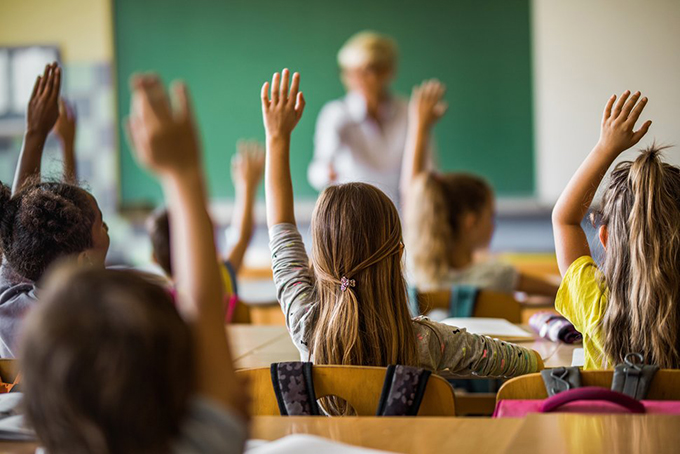 Sen. Elizabeth Warren wants to go further and quadruple funding for that same program. She also wants to make quality child care and preschool affordable or free for all American families with kids, along with free breakfast and lunch for all public school students.

Funding increases of this scale would transform the federal role in education policy, making it easier for school districts to pay teachers higher wages while reducing class sizes. This focus on funding would mark a departure from previous administrations, which instead emphasized policies intended to increase accountability and strengthen teacher evaluation.

As a scholar of school finance, I study the role of resources in schools. The research is clear that spending more on students over the long haul would bring about long-term benefits.

The federal government spends a total of about $55 billion per year on K-12 education, in addition to outlays for early childhood and post-secondary programs like loans and grants for college tuition. This amounts to around $1,000 per K-12 student and just 8% of the total $700 billion it costs to run the nation’s public schools, which are mostly funded by state and local tax dollars.

Federal funding has never surpassed 10% of total public school funding, except from 2010 to 2012 when the federal government sought to reduce the school spending cuts brought about during the Great Recession. 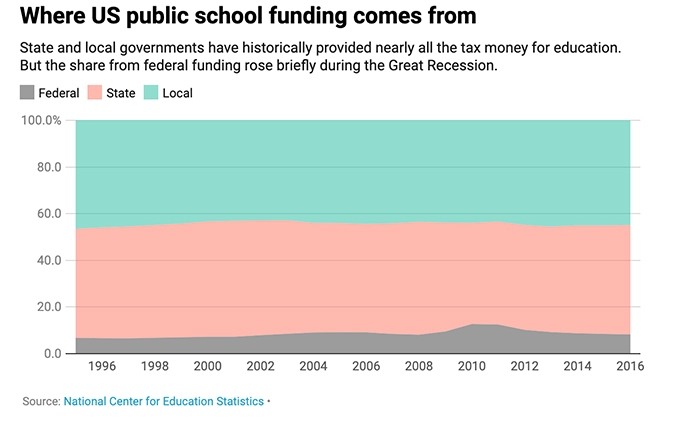 The federal government has historically exerted influence in nonmonetary ways. For example, under the No Child Left Behind Act of 2001, President George W. Bush’s administration relied on standardized tests to hold schools accountable for student achievement. Schools that failed to make yearly progress on test scores faced serious repercussions, such as replacing the school staff or reopening the school as a charter school.

President Barack Obama’s Education Department used Race to the Top – under which states competed for federal grants through a point system – and other initiatives to get states to adopt a specific set of policies regarding teacher hiring, promotion and dismissal that the Education Department said would help schools employ better teachers overall.

Obama also signed the Every Student Succeeds Act into law in 2015. It scaled back many of these policies and returned authority over accountability back to individual states.

These initiatives have two things in common. All of them have been longer on mandates than money, and it’s unclear that any have worked. Some major studies failed to find substantial impacts and educators have largely opposed using student test scores to drive high-stakes staffing decisions.

One source of opposition to increasing spending on public schools is a now–infamous graph that traces the rise of this spending on a per-student basis over the past 40 years, while test scores have remained stagnant. The juxtaposition of these two trend lines, opponents of higher spending say, suggests that more funding is not the answer.

Versions of this chart often appear in libertarian, conservative and mainstream outlets.

Education Secretary Betsy DeVos tweeted a version of the graph and later declared that the “gap between the highest- and lowest-performing students is widening, despite $1 trillion in federal spending over 40 years.”

I find DeVos’ statement and the graph she was talking about misleading.

A simple comparison of two trends does not necessarily mean that one causes the other. I also think this line of argument becomes potentially dangerous when policymakers use it to justify underinvesting in public education.

The significant increase in Title I funding Warren, Sanders, Biden and other candidates propose could partly address a problem that all the leading Democratic presidential candidates agree requires urgent action: substantial funding inequities in public schools.

Despite a widespread stated commitment to equity, many states actually spend less in high-poverty school districts than in more affluent communities.

In addition, students of color attend schools that receive, on average, $2,200 less per student from state coffers compared with the schools predominantly enrolling white students.

Of course, finding a way to pay for these spending increases through new tax dollars or cuts to other priorities would be a challenge. But there is probably no way to address the challenges facing the nation’s public schools that doesn’t involve significant increases in funding, targeted to places where most students are growing up in poverty.

Author Bio: David Knight is an Assistant Professor of Education Finance and Policy at the University of Washington