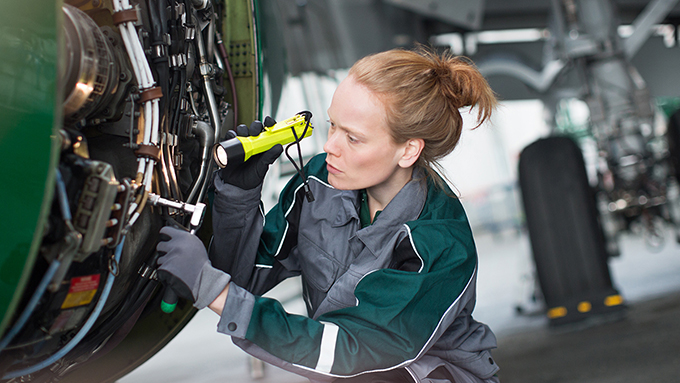 Registered in mathematics at the University of Western Brittany (UBO), Jeanne is part of the group of female students “Les filles qui” , whose members go to primary schools to introduce children to computer programming.

By taking on this role as referents, they hope to show girls that science opens up careers for them as much as it does for boys. And listening to Jeanne, the results are promising: “We are acting at the local level but, given the interest aroused by the project, if it were deployed on a larger scale, I think that we could really change things. ”

In fact, the low proportion of women in its trades is a crucial problem for the digital sector, identified for years. This is an area that recruits, offers real prospects for progression and attractive remuneration for young people. However, a certain number of stereotypes hang over him, like that of the “geek” locked in his office, spending hours in front of his screen without interacting with the rest of the world.

In reality, the daily life of these professions is very diverse, constantly evolving and based on teamwork. However, negative representations play on girls’ choices of orientation. Recent studies in France have highlighted this impact .

How can we effectively fight against these stubborn representations that drive away many potential candidates? Like “Les filles qui”, initiated in May 2016 at the University of Western Brittany and “L Codent L Créent” , worn since 2018 by ENSTA Brittany, educational devices are trying to offer new models to girls.

For primary classes in the first case, or middle school students in the third in the second, they revolve around programming workshops, given by students or engineering students. Their springs are resolutely playful. To make digital works – drawings or games for example – at the center of each workshop, participants thus have access to different supports from the conventional computer: Raspberry Pi boxes which have the advantage of making it possible to program all kinds of activities using robots, webcams or even sensors.

In primary, “Girls who” work on a large scale in mixed classes: 70 students taught Scratch programming in 46 classes in 2018-2019 and we will have more than 70 classes and 1,500 children for this year. Created and distributed by the Massachusetts Institute of Technology ( MIT ), Scratch is used by tens of millions of children around the world and allows them to create animated stories, simple or sophisticated games, graphics, music.

As for colleges, the “L Codent L Créent” system is more confidential for the moment, but is also progressing. In 2018/2019, 11 students from ENSTA Bretagne took action at four colleges in and around Brest. 53 third graders participated in the workshops. In 2019/2020, they will be close to a hundred.

What do such devices bring? While programming is a requirement of primary school programs , the “Girls who” device is timely to support the teaching teams and provide them with support in achieving objectives deemed unattainable by school means alone.

For the colleges, already better equipped on the programming side, meeting with female engineering students, providing a turnkey and fun device are undeniable assets.

If, in primary school, the pupils appreciate being in a different framework from the traditional class and confronted with other ways of doing things, the schoolgirls get satisfaction from a condition for the high school. And for everyone, according to the data we have collected, the fun aspect is a major asset of the workshops.

As for the students, they declare themselves proud to have participated in a project that carries “great values”, and see themselves as “inspirational figures for the youngest”. They are thus fully aware of their role as a model of identification. However, this effect is limited to schoolgirls, no doubt because the third is the time of choice of orientation, and therefore of future prospects.

Through these programming workshops, students come to the awareness of the skills and competences they did not suspect, probably for want of not mobilizing them; whether it’s their ability to transmit, or adapt to audiences of children and adolescents.

At the same time, these educational devices are part of an action research to which we associate the students. This is yet another discovery and a complementary means of enhancing their investment: getting feedback from stakeholders and putting it into perspective through research.

However, it should not be hidden that the setting up of such systems gives rise to debates and questions, in particular on one point: the unmixedness on the side of students and college students. Thus, a teacher confides to us: “I find it strange that we only welcome girls or boys. The messages are always disturbing when we partition. ”

At the institutional level, it is even possible to speak of resistance: the designers and designers of the system must deal with calls to open the project to students, these calls coming from the faculty or students. If co-education is one of the major educational developments XX th  century, the devices “Girls” and “The L Creates Encode” the debate challenge.

To feed the latter, it must be borne in mind that it is in a context of diversity that male and female stereotypes are most manifest and modulate the behavior of students. Thus, deploying a non-mixed device makes it possible to neutralize gender relations and create conditions more favorable to the identification effect.

Finally, it should not be forgotten that other school areas are not mixed, without being subject to controversy, in sport for example. Times are changing and “Les filles qui” and “L Codent L Créent” are there to support a feminine transition to digital, while having fun. In any case, elementary and middle school students, committed students, everyone finds great pleasure in it.