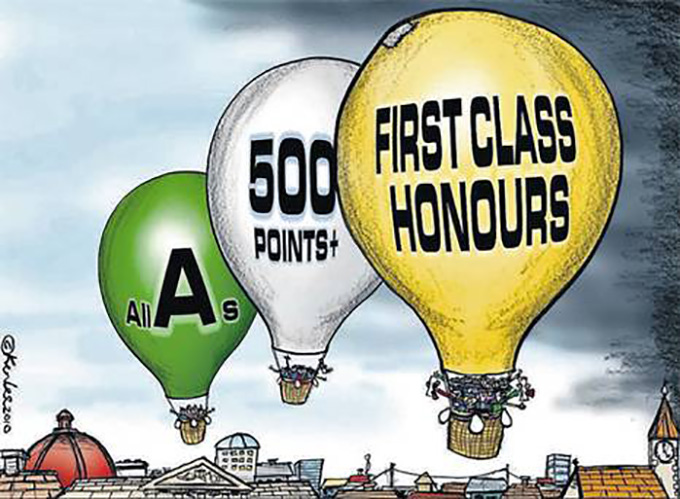 The Times of London recently predicted that, on current trends, all students at some British universities will obtain first-class degrees by the end of this new decade. The 2:2 will become extinct across the whole sector by 2033. And in 38 years’ time we will get to the point where all students receive firsts.

There are few topics that generate press outrage as reliably and predictably as grade inflation. Yet taking a step back can help us put in perspective all the talk about qualifications becoming worthless and, by lowering the temperature of debate, suggest where change may indeed be needed.

I was super cool about my degree result: I was away when it was announced and made no effort to find out what had happened until about a week later, when I had a party to attend in Oxford. This was partly adolescent bravado but it was also a firm belief that intellectual life was not about grades. And although I recognised the instrumental importance of the issue, academic success and failure were not something that mattered to me personally.

Anyway, when I did find out I rang home as requested and was handed to my father: “What did you get?”

“Oh, did you?” And the phone was banged down, without giving me any opportunity to reel off the list of prizes awarded and congratulatory letters that I had found in my pigeon-hole.

My father was the headmaster of our local grammar school and therefore I had gone away to school. He had an upper-second degree in modern languages from King’s College London, awarded in 1934. He had a reverence, perhaps tinged with some degree of resentment, for the idea of the “Oxford first” – and the thought that his bone idle, overprivileged, overconfident dilettante of a son actually was one was clearly unbearable. (“Bone idle” was a phrase he often used; the rest is extrapolation. Our relationship was not quite as dysfunctional as it sounds because we generally managed to avoid each other completely. In retrospect, I’m grateful for the lack of parental pressure.)

I have told this story all my life to illustrate the varieties of parent-child relationships, but it can also be quoted to suggest several things about grades and classifications, including how much people care about them and how much they can resent the ease with which they are sometimes achieved, particularly by those younger than themselves.

I have two other qualifications, both in essence fakes. The first is an Oxford MA, for which I had to pay £11.00, having stayed out of jail for a couple of years after the award of a BA. The other is a DLitt (doctor of letters), awarded for pursuing a hobby (writing about the politics of sport). In each case, I wanted the qualification because it would open up opportunities (or the lack of it would close them off), especially abroad and especially in North America. For that matter, although I am frequently addressed as professor, I’m not a real professor; I’m an emeritus reader at the University of Warwick. On the other hand, I do have a letter from a vice-chancellor somewhere saying that I may also call myself “senior associate professor emeritus” and I am or have been a “visiting” professor on four continents. Anyway, everybody seems to be some sort of professor these days. But generally I’m happy to be a fake and to contribute to the undermining of standards.

Thus, my reaction to “grade inflation” tends to be cynical rather than indignant. I first heard the term in the US in the 1970s. More and more people were getting As, it was said. This was largely because the people who marked them were the people who taught them and they complained if they didn’t like their grade. This led to declining standards and even more virulent complaints from those who were dissatisfied, a spiralling process. I smugly believed it couldn’t happen back home, mainly because we separated the processes of teaching and examining, with the normal required essays not counting towards the degree. Marking was “objective” and involved second markers and external examiners: you wouldn’t even know to whom a complaint should be addressed. (For the record, I can state that nobody ever complained to me about a mark I had given them, but that was because any marks I allocated were used in a way that was in essence advisory.)

Grade inflation has occurred now largely because that system changed. Whereas the department I used to be in did not give any first-class honours in its principal degree for more than a decade because no candidate was deemed good enough, the 2017-18 figures for the proportion of firsts at the most generous UK institution, Imperial College London, is 46 per cent, with the University of Huddersfield in second place at 40 per cent.

There is some debate about the explanation for this level of inflation in what previously seemed to be a robust system: most people blame the academics, but The Guardian, which is read by a lot of academics, blames the government. There is no debate, however, about whether these statistics represent an increase in performance. Wherever I look or ask, whether in universities, in pubs or online, I don’t find anyone who believes that standards are actually higher. It is entirely obvious that the ability to produce a decent piece of work given plenty of time and precise advice from those who are going to assess you is considerably more widespread than the ability to produce coherent answers to previously unseen questions in a stressful situation. It’s like comparing high diving with bellyflopping.

In my generation, 5 per cent of the population went to university and about 4 per cent of those were awarded first-class degrees; now the figures are more like 50 per cent and 40 per cent. This is hyper-inflation rather than just inflation and its consequences have to be examined carefully. Unlike some people, I don’t feel any personal resentment about the devaluation of my only serious qualification. I was, after all, paid in real money; I had a choice of careers and chose a fast-tracked academic career that had me paying into the pension pot at 22 and retiring comfortably at 57. The benefits lasted a lifetime.

The people who suffer are those like me in a younger generation, who are faced with a long plod to an established career. If they are like my sons and most of the bright students I taught in later years, they simply won’t bother with academic life, but will pursue other careers, leaving plodding to the plodders – but also to the wealthy. When you have to live in penury in your twenties in order to pursue a career, as you must in acting and when seeking to qualify as a barrister, for example, then a conduit of social mobility dries up.

The crucial point to realise is that, at a historical and theoretical level, the inflation of grades and ranks is a normal historical process. They are what my late colleague Fred Hirsch called “positional” goods. Unlike land and gold, their supply can be increased – and their value decreased – indefinitely by policy, deliberate and inadvertent. There will always be short-term reasons to increase them. Roman citizenship and the pre-revolutionary aristocracies both of France and Russia, all of which reached double-digit percentages of the population, are classic examples. Over a century ago, W. S. Gilbert had Don Alhambra in The Gondoliers tell the tale of the “good king” who promoted everybody so that clergyman were all bishops and sailors were all admirals until it was realised that “When everyone is somebodee [sic]/Then no-one’s anybody.”

Thus, grade inflation is part of the normal decadence of societies and the interesting cases, in need of explanation, are those where it doesn’t happen, such as the British aristocracy or, for a long time, the British system of classifying degrees. But the more important question concerns what you can do to remedy a situation of hyperinflation, so as to benefit the really first-class minds who might be coming out of the University of Huddersfield (who are surely not 40 per cent of the total). My assumptions in answering this question, following those of John Stuart Mill and some of his contemporaries, are that elites are inevitable and that they should be as small, as able and as accountable as possible. I believe that the British university system once scored quite well on these criteria, but it no longer does so.

When it comes to the question of what should happen now, I think the answers are rather obvious. The system of degree classifications, already mildly ridiculous by the end of my working life, has in essence abolished itself. So, just as, for generations, all students have been awarded “honours”, they now might as well all be considered “first class”. But the serious information should be contained in an American-style transcript, which should make clear, among other things, the relative strengths and weaknesses of the candidate and where they stood in the rankings of their contemporaries. Many parts of the job market may not be interested in firsts as such, but they may well (and should) want to know who were the very best students. This could be complemented by a more developed and rigorous system of prizes such as those awarded at both Oxford and Warwick for the best marks – and so the “top first” – for certain subjects in each year.

But it will need more than that. What able people need for their abilities to be recognised is a proper system of competitive examination that allows them to demonstrate fast thinking, broad knowledge and originality. The models would be those institutions that have allocated positions according to results in unseen timed examinations open to all applicants. This method was used from the Tang Dynasty onwards to recruit to the Chinese civil service and has also played a part in recruitment for the British Civil Service. In the academic world it is unusual, but All Souls College, Oxford has always allocated some fellowships on the basis of what is sometimes said to be “the world’s hardest exam”.

Such examinations should be assessed anonymously by an incorruptible exams commission, with the assumption that merely normal people will fail. And although the exam would be taken at or just after the end of one’s time as an undergraduate, it should also be available to non-graduates. I have always believed in the “autodidact” and, with the development of the internet, there are no limits to the possibilities for people who are both intelligent and intellectually curious. One option for those succeeding in this system at a high level would be an immediate academic post.

Author Bio: Lincoln Allison is Emeritus Reader in politics at the University of Warwick.