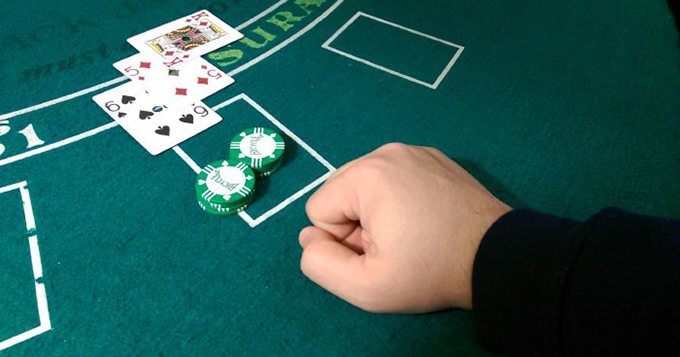 Allow me to start by discussion of a gambling strategy that is, mathematically, guaranteed to win. Yes, I’m using “mathematically” as a weasel word, but let me explain the basics of it.

Now, this isn’t a fair game, right? You double your money less than half the time, and lose everything the rest, so it’s a game a casino would be happy to have you play.

The way how mathematicians and rational people consider these situations is with “expected value,” weighing the payoff and probability of winning against the amount and probability of losses. Every time you play this particular game, for example, you mathematically expect to lose $1.67…a terrible game, and any rational person will tell you not to play. Ever.

This method, endlessly doubling down, will mathematically create wins for the player, even when it’s a losing a game, a game no person should ever play. Yes, you could hit a losing streak, but as long as you can keep doubling down, you’ll win (there’s a less than 20% chance you’ll even need to double down 5 times in the above terrible game—even with awful odds you’ll most likely come out $5 ahead if you only go through the doubling down procedure one time).

So we have a guaranteed winning strategy, right? The devil is in the details, of course.

The first detail is the one the casinos address right away: casinos put a maximum on your bet. Casinos only let you bet so much at a table—even in an unfavorable game, they need to make sure they stay in business, it’s their absolute priority (which is why the mainstream claim that Paddock “made a living” playing at video poker machines is pure idiocy…it just doesn’t work that way).

The second detail is reality for most human beings: you need an infinite amount of money to use this strategy. Sure, you’re likely to win most times, but sooner or later you’ll hit a losing streak, and won’t have the money to double down again. To call this scenario a “losing streak” is a bit unfair, as this is a terrible game and this streak will happen eventually…the idea of using a strategy where you can risk thousands of dollars in an attempt to gain a measly five bucks is ridiculous.

In short, the doubling down strategy leads to major economic disaster for anyone who plays it, eventually; if you have more money, it’ll take longer, but it’s always a disaster in the end.

While “doubling down” is a terrible strategy for normal human beings, there are two places where doubling down seems to be the only course of action.

The Federal government, through their fiat monetary system, basically has an infinite amount of money. They can print up whatever they want, so it doesn’t matter how horrible the ideas they’re pursuing, they can just keep doubling down, over and over again. Trouble is, most things the government tries to do are horrible, not nearly as “fair” as the simple dice game I proposed above. A “losing streak” for a government policy is about as commonplace as a wet spot where a chunk of ice used to be.

There’s not even the slightest hint this will ever stop. Effects of this doubling include a stock market that can’t drop even 1% even when we have cities crushed by hurricanes, economic stagnation for almost everyone in the country (to clarify: for everyone without access to the doubling down spigot), and spiraling costs for the things people really want, in addition to those beyond-astronomical debts.

Trouble is, the government doesn’t really have infinite money, it just has the ability to make infinite amounts of currency. At some point, the fiat currency will assume intrinsic value (i.e., 0), and we’ll have the ultimate economic disaster my gambling strategy predicts.

–I haven’t read this book, but the point is it’s a powerful strategy…until it fails utterly.

The rise of political correctness has been truly astonishing the last 30ish years. When its primary advocates, the Social Justice Warriors (SJWs) first arrived on campus, they were looked at strangely. They had strange ideas, things that were obviously wrong on multiple levels (among many examples, things like “men and women are exactly equal in all ways, which is why we need to give women special privileges”).

They were first pointed at with accompanying laughter, and their ridiculous ideas were shown as ridiculous.

But the SJWs doubled down, insisting they were in the right. The SJWs didn’t have infinite money, of course, but they have infinite bravado, fueled by a zealous conviction of being in the right. All attempts to argue for common sense, for scientific reason, for basic decency, failed in the face of endless doubling down.

Time and again their ridiculous ideas (I’m not saying all their ideas were ridiculous, mind you) were laughed at, but they kept doubling down…eventually getting lucky on every aspect of their agenda. This is why, in the face of all logic and reason, we have “Diversity Institutes” on our campuses, staffed by ridiculously overpaid Diversity Commissars, promoting the exact opposite of diversity, to the point of viciously attacking anyone who dare show even a hint of diversity of opinion.

However, it’s starting to become apparent that the era of the SJW might be ending. Trump winning the last election was such an epic slap in the face, a resounding strike to knock some sense into these guys, that it should have made a difference.

They responded with another double down, insisting, despite all reason, “Trump is not my president” and supporting every cockamamie idea that might somehow change this cold, hard, reality. There’s a distinct possibility they’ve run out of capital. Finally.

We now have books detailing how to fight the SJW, how to stop them from “converging” those few institutions remaining in the country that have not fallen under their sway. We have formerly peaceful law-abiding countries now turned into rape-capitals by following SJW ideals. We have people talking about getting “red pilled” into understanding that SJWs are insane.

In response to these obvious failures, the SJWs can only double down instead of consider that, perhaps, they’re playing a losing game and need to change what they are doing. It’s sad that their zealotry won’t allow for the possibility they’ve made a mistake. Already I have friends who swear that all their future votes will be in direct contravention to whatever SJWs want, and I believe the day is coming where there will no longer be even a slight attempt to negotiate in any way here.

That’s a shame, because the SJW does have a couple decent things to say. But, much like with my gambling game where one must consider the expected value of playing, the bottom line here is playing their game is a losing proposition, and so it’s reasonable, if sad, that we must abandon the possibility of winning in the near term in the face of mathematical certainty of losing in the end.

Too bad we don’t get that option with our fiat currency system.