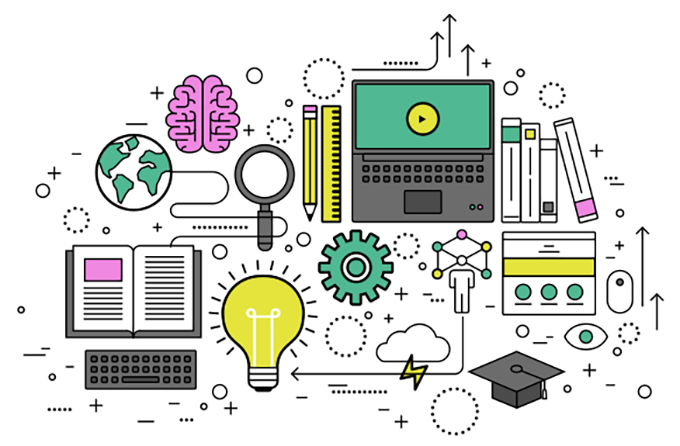 The rise of the Internet and mobile applications has given birth to a new economic sector , around technologies dedicated to knowledge and transmission, known as “EdTechs”. Used in the United States from 2010, under the pen of American researchers , this name covers a whole variety of actors offering virtual classes, interactive exam preparations, language learning solutions or tutoring, orientation aids.

The tools developed can be addressed only to educational teams, in the educational and private sectors, or directly to the general public, and are now organized into three very different segments: schooling from kindergarten to high school, higher education, and professional training. In all cases, access to the market is complex since the user is rarely the payer…

Will the experience of confinement and the generalization of distance education permanently change the situation for these companies?

According to the annual report of Educapital, a specialized investment fund, $ 7 billion was invested in 2019 in EdTechs around the world.

China and the United States account for almost two thirds of the world market, with 2.4 billion dollars for China, 2.3 billion dollars for the USA. Europe, which until now has been a Petit Poucet with 450 million euros in 2017 and 763 million in 2018, continues to grow strongly. In 2019 it exceeded for the first time the symbolic threshold of the billion euros invested, driven by French, British and Scandinavian investments.

But the strategies differ greatly from one country to another. For example, in China, 64% of investments relate to the school segment because parents are used to paying for the success of their children, while in France, this segment struggles to monetize its offers. If fundraising has doubled in one year, with an average of 11 million euros in 2019, the market remains modest.

In France, the EdTechs sector has between 300 and 400 companies… This number fluctuates according to creations, mergers and disappearances. Some have achieved great notoriety. Among the best known are the online training site Openclassroom, Digischool, dedicated to 15-25 year olds, or the community of online teachers Superprofs. But the vast majority are start-ups with fewer than 10 employees who are struggling to find their business model.

First, since 2013, the State has been rather favorable. The 2017 Digital Education Plan provided that 50% of public establishments would be equipped with tablets or computers. Even if “the results of its implementation are disappointing”, according to a report by the Court of Auditors , political support is a strong signal.

Second, the French industry is federating. In May 2018, the association EdTech France intends to make France the “Edtech Nation” . In 2020, EdtechFrance is a recognized spokesperson who now has 250 members and two regional clusters around Paris and Lyon.

Third, further proof of the growth of this market, there are now dedicated investment funds. Brighteye Ventures , Educapital and Ibis Capital are taking a close interest in this market which has not yet undergone its digital revolution .

Fourth, the French ecosystem is present in international fairs and exhibitions. The largest trade shows dedicated to digital are welcoming more and more tri-color EdTechs ( CES in Las Vegas, or Vivatech in Paris). And they occupy a prominent place in dedicated fairs ( BETT in London, EdtechXEurope , or WISE in Qatar, one of whose regional editions was held in Paris in 2019).

Finally, fifthly, to prepare for the future, specialized accelerators are being established all over the territory, often hosted by management schools: Learnspace created by a HEC graduate, Neoma EdTech Accelerator or EM Lyon Ed Job Tech between others, seized the interest of getting closer to these new actors in education.

Containment, neither coronation nor massacre

All EdTechs will not get their game due to the closure of schools. In reality, the sector is made up of start-ups whose situations are extremely heterogeneous.

For some, the current crisis devotes years of experimentation to a life-size test. Thus, Lalilo, a platform for young schoolchildren, announces that it has registered in 4 days the registrations of more than 10% of teachers in cycle 2 (14,000 out of 135,000).

Each day, French students would do more than a million exercises on Lalilo against 20,000 per day in normal times. Like her, other EdTechs, propelled to the front of the stage, take advantage of the situation to make themselves known. Their solidarity offers are freely accessible, relayed by a very official newsletter from the Ministry of Labor.

But others suffer from confinement, in France as elsewhere. In April 2020, BrightEye Ventures published the results of a survey of mostly European EdTech entrepreneurs. It turns out that the current crisis does not seem like an El Dorado for all the actors of Edtech. For example, in the SME and VSE segment, 43% of respondents would suffer from a loss of customers.

So, once the containment is lifted, one can wonder if the EdTechs will have gained insurance or lost their presence.

Which scenario for which final casting?

In the scenario less favorable to EdTechs, we can bet on a sudden end to their use as soon as schools reopen from May 11, 2020. Decried for their propensity to replace humans with screens, EdTechs solutions could be quick sacrificed on the altar of the more humanist values ​​of the “next world”.

There would still be no smartphones in schools and more schools in smartphones . Ironically, the generosity of EdTechs who have given free access to their resources has only served to underline the lack of autonomy of many learners and the inequalities of illectronism .

In contrast, the most favorable scenario would be the maintenance of a certain dose of distance learning, supported by the parents’ new tolerance for screens.

The teachers, in the wake of Michel Serres, would apply the “presumption of skills” to a generation of Little Thumbs, eager to complete the face-to-face lessons with digital resources ( BRNE ). And the government would direct PIA investments towards EdTechs .

A third voice is heard to build a learning society that places collaboration and digital culture at the center of school learning. Perhaps this is where the key role of young EdTechs is found: neither against nor alongside, but within schools, themselves at the heart of society, throughout an individual’s life.

In any case, all the French actors agree to demand the protection of the educational sovereignty of the GAFAM’s appetite.