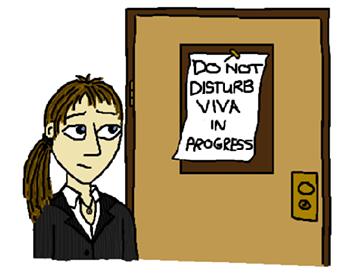 The Viva – a live presentation of your thesis to examiners – is not common in Australia. Our thesis examination is a blind peer review process, which has its own fears, but nothing like the anxiety that a viva can provoke. Horror stories tend to circulate, which is why I was happy to be sent this post by a student who preferred to remain anonymous.

“I had my doctoral viva. And I enjoyed it.”

Yes, what you are reading is indeed true. I thoroughly enjoyed every minute of my 3 3/4 hour viva voce. But it wasn’t just me. Both of my examiners also enjoyed the experience.
Why was this the case and what lessons does it hold?
From handing in my thesis until my viva, I was overcome by a crippling state of anxiety. I had heard all of the horror stories: people having their work rubbished, examiners proclaiming that their work was completely wrong; people leaving the exam room crying, with their confidence shattered in tiny pieces. What would my examiners ask me? What if I couldn’t answer their questions? Will they be fair?
But I needn’t have worried. My two examiners conducted the viva in a manner that was stark contrast to everything I had heard about. From the very first moment, they sought to put me at ease, and every time they asked a difficult question, they stressed that it was not a test but simply a discussion. They had taken the time to carefully read my thesis, and it was a joy to scientifically converse with them.
I had never previously had the opportunity to have such an in-depth discussion of my work, and this felt like a celebration of everything I had achieved over the past 3.5 years. I left feeling proud of my work, thinking that this is truly what a doctoral viva should be like!
After having had my viva, the main part of the viva which I believe young researchers find daunting is independently expressing and evaluating their own work. With pressure from research councils to ensure that PhD’s are completed on time, many institutions now have systems for end of year vivas. In reality, these are often regarded as a box ticking exercise to satisfy administrators.
In the rare cases where an actual formal viva does take place, the supervisor may even turn it into a whip-lashing session to drive more output from the student. It is rarely commented upon, but the presence of the supervisor changes the dynamic of the viva. Supervisors may not appreciate critique of work which has grown out of their own research, and so young researchers refrain from saying anything that may harbour offence.
At UK institutions, PhD supervisors are seldom present in the final vivas, and the candidates have to be able to stand on their own two feet. If end of year vivas were conducted in a similar manner, formally with the supervisor in absentia, doctoral scholars would gain invaluable experience in critical analysis.
Learning to communicate one’s research is a skill traditionally seen to be developed through giving presentations on national and international platforms. Whilst speaking in front of many academics is in itself a daunting task, tighter budgets mean that universities find it increasingly difficult to send many of their students away to present at meetings.
Recently, an clever initiative at the University of Manchester has recreated the atmosphere of an international conference, but on their home turf. The annual Postgraduate Summer Research Showcase (PSRS) gives hundreds of postgraduate researchers an environment to practise communicating ideas, and comes at a fraction of the cost of sending the same number of students away to conferences.
The Salford Postgraduate Annual Research Conference also brings researchers together and encourages them to present their work through interactive and dynamics media such as Pecha Kucha, performances and demonstrations Similar models could be adopted by other institutions to help their researchers communicate and network.
The ability to articulate scientific ideas in a clear and concise manner can also be developed through other means. A tutor with the Brilliant Club mentioned how, after succeeding in getting a bored secondary school student to engage with their work, communicating ideas to any audience was a piece of cake.
The focus during a PhD is primarily centred upon getting research done, but public engagement and outreach can have a pivotal role in helping researchers to develop the ability articulate and express ideas. Not only are these vital skills for successfully navigating a doctoral viva, but they also help the PhD become a highly valued transferable asset in the job market.
Researchers, supervisors and programme directors alike should all seriously think from the outset about both gaining sufficient research material, but also learning how to communicate it. In this way the viva can cease to be examination, and turns into a celebration!
Now, where is the cake?