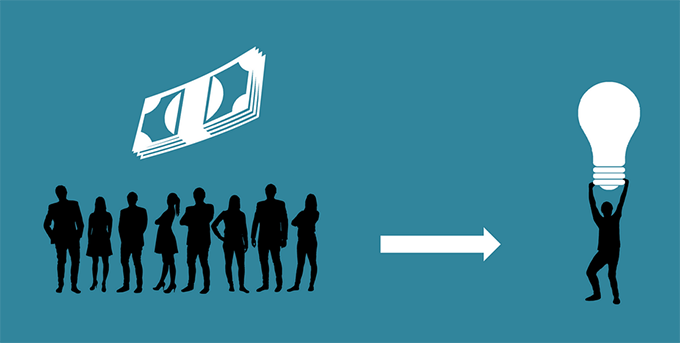 Crowdfunding a project is a great way for your research, or research communication, to connect with a wider audience. Sometimes, it’s the only way to make a project happen if it doesn’t fit into traditional funding models.

Crowd-funding can also support projects that are joyful or beautiful, which are not standard grant metrics. Crowd-funding is not a panacea for the continued shortfall in government and philanthropic funding, but it is an exciting tool for research.

Jonathan has already written a great introduction to patronage as a funding model. This could be a one-off campaign on Kickstarter or Pozible, or a monthly subscription type project through platforms like Patreon or Substack. If you have an idea for a project, this post has some advice for how to think about setting up a crowd-funded project. The patronage model isn’t for everyone, but I’ve enjoyed learning how to run a project in a way that draws on business planning as well as the usual project planning that I do as an academic.

My experience with crowd-funding comes from creating a linguistics podcast for a general audience. In late 2016, I teamed up with Gretchen McCulloch to start Lingthusiasm, a podcast that is enthusiastic about linguistics. Gretchen is a professional science communicator, and I have always made public engagement a feature of my academic practice. Both Gretchen and I already have full time jobs, so we knew that for the podcast to become sustainable we would need the funding to pay for production support. We launched a Patreon in early 2017, with short bonus episodes every month. As of September 2019, we have 600 people supporting the show. This has allowed us to expand to doing a full-length bonus episode every month for patrons, buy some better equipment, do live shows in Montreal and Melbourne, and produce video episodes on gesture and signed language linguistics. We also have Lingthusiasm merch, which provides another way for people to support the show, and also show their own enthusiasm for linguistics.

Below are three lessons I’ve learnt about crowd-funding.

This was also my first piece of advice when I wrote about starting an academic podcast. It’s worth repeating here, because it will help you refine your business plan. Academic research and writing sometimes happens with audience as a secondary concern, but crowd-funding by its nature means you have to think about your audience throughout your planning process. This will help you refine the project aims and the funding model you use. Thinking about your audience doesn’t mean you’re ‘selling out’. It’s just a matter of finding the right balance between creativity and commercial considerations.

If you’re trying to target people in their early 20s, for example, you wouldn’t use Facebook as a main platform because that’s where their parents hang out. If your audience doesn’t consume a lot of digital content it might be easier to do a one-off campaign then try to keep them engaged every month. Lingthusiasm is about bringing people into a terminology-light version of the linguistically-informed but playful conversations we often have with our colleagues. Knowing that our audience are engaged online, already subscribed to our monthly podcast, meant that Patreon with regular bonuses was an obvious platform choice for us.

A crowd-funding project requires you to think realistically about the costs involved; both in terms of the time and money.

Many of these projects happen around other commitments, so you need to be realistic about how much time it will take. This involves a lot of pre-planning, but also a considerable investment of time while the campaign is live. For any project, you also need to consider how you’re going to deliver it in a realistic time-frame.

For us in 2019 that has meant working around Gretchen disappearing for a couple of months to do publicity for her book (Because Internet! >> It’s great!) and me being on parental leave with a new bub. We’ve had to plan – and often record – ahead to keep up the regular release schedule.

As Jonathan mentioned in his post about Jess Nevins’ Encyclopedia of Golden Age Superheroes, you need to plan both for success and also contingencies. For Lingthusiasm, we have future plans that involve both exciting content (top secret for now!) but also less glamorous (but still exciting for us) plans about how to manage the growing workload. Mostly, these are to do with bringing our excellent producer Claire on board to manage administration. We also have plans for what happens if Patreon subscriptions plateau or contract, which is the opposite of exciting but it’s necessary contingency planning.

It’s OK to ask for money

The vocational nature of research means that people find it hard to ask for money to do something they love. There is also an established tradition in industries like news journalism where academics are not paid for writing opinion pieces. This made some amount of sense back in an era where academia wasn’t rife with casualisation and financial precarity. It’s OK to ask for money for your work. It’s OK to cover your costs. It’s even OK to be compensated for your time, energy and skill.

Experimenting with a crowd-funded project can be a stepping stone to alternative research communication careers. I find reading business advice blogs good for helping with this mindset. Get Bullish is a classic; friends and I have been sending Jen Dzuria’s posts to each other for years (e.g. How to Run Your Career Like a Business).

This is not to say you should expect people to part with their money. Part of the success of Lingthusiasm is that Gretchen and I had many years of combined experience in writing pop linguistics, so we already had people who were interested in the podcast from the beginning. Both of our blogs took several years to build up a substantial readership, so each project makes the next one easier to get up off the ground.

If you are altruistically motivated, I find it easier to think about it this way; the better you do it, the easier it will be for those who come after you to ask for money too (It’s part of sending the elevator back down).

Crowd-funded research related projects aren’t competing against each other for people’s money and attention; we’re competing against Netflix and Instagram holiday photos. I’m excited about the future of crowd-funding engaging projects.

Author Bio: Lauren Gawne is a David Myers Research Fellow at La Trobe University. Her research focuses on grammar and gesture in Tibetan languages of Nepal.