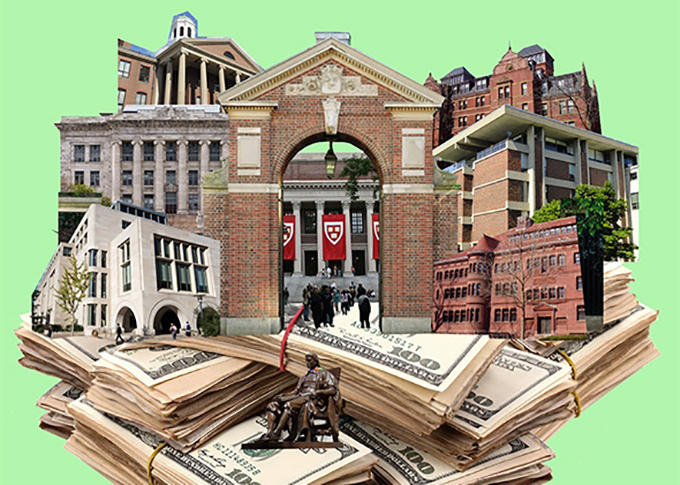 Tucked away in the recently announced GOP tax bill is a small item you may have missed: a new tax on university endowments. As I have spent decades working in higher education, the proposal immediately piqued my interest.

Colleges create endowments by raising funds from alumni, companies and other donors, invest the money in stocks, bonds and other assets, and use the returns to fund student aid programs, professors’ salaries and any other expenses needed to run a college. Republicans want to slap a 1.4 percent tax on certain endowments’ investment income, also known as their returns.

Some college leaders are already howling at the proposal – and at several others in the tax bill targeting higher education – arguing it would threaten their autonomy and reduce support for poorer students.

Since tax revenue to run the government has to come from somewhere, I believe colleges and universities are fair game. To me, the questions that matter are simple: Is the tax itself fair? And would it be effective?

Republicans have expressed concern about the tax-exempt status of college endowments for several years, arguing the largest ones aren’t spending enough on tuition assistance and questioning how the funds are managed.

Such endowments have grown dramatically recently, presenting a juicy target for GOP lawmakers looking for revenue to offset nearly $1.5 trillion in tax cuts for companies and individuals.

Post-secondary institutions reported a total of $547 billion in endowment assets as of 2016, up 54 percent from five years earlier, shortly after they got whacked by the financial crisis. And in the preceding academic year, from 2014 to 2015, schools earned a total of $26 billion off their endowment assets. 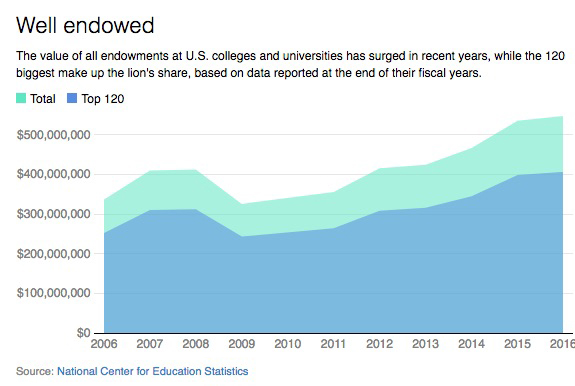 Harvard, however, is not alone in having a hefty endowment. Fellow private universities Yale, Stanford and Princeton all have more than $20 billion each, as does the public University of Texas. The 10 biggest endowments combined were worth more than $183 billion in 2016, about a third of the total. 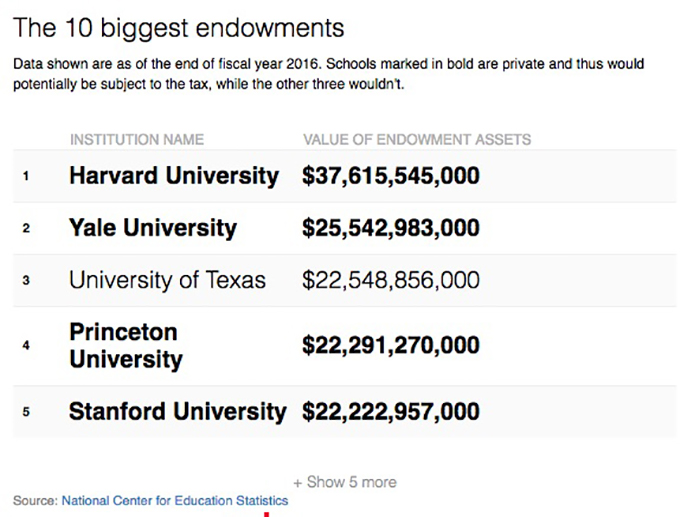 How the tax would work

Republicans aren’t targeting all schools with an endowment, however, or even only large ones.

Their plan has three criteria: To be taxed, a school must be private, enroll at least 500 students and have an endowment that amounts to at least $250,000 per student – up from an earlier proposal of $100,000. This means all public colleges are exempt, as are private schools with an endowment smaller than $125 million or a disproportionately large or small student body.

One other requirement is that an endowment must actually earn a return on its investments to be taxed. Many do not in any given year. 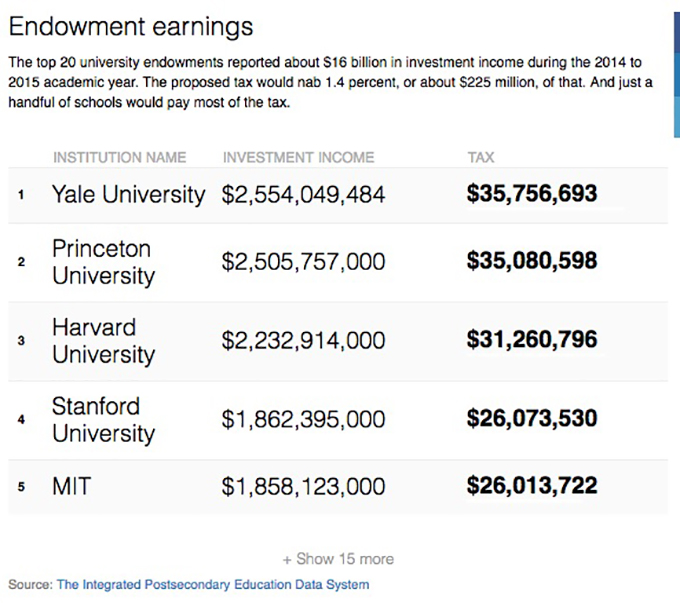 How much it would raise

The earlier proposal, which was detailed only last week, would have affected about 150 of the 3,922 colleges that have an endowment, yielding what I estimated would have amounted to just under $270 million based on the 2014-15 academic year. Republicans said the tax would reap $3 billion over a decade.

The latest version, with the much higher threshold, would affect fewer than half that, or roughly 60 to 70 schools. That would probably not lower the amount raised that much since only a handful of primarily elite schools will pay almost all of the tax.

Most colleges, on the other hand, would not pay very much. For example, Carleton College in Minnesota, which ranks in the middle of the tax list, would owe about $250,000. Some colleges, such as Emory in Atlanta, whose endowment lost almost $160 million in the period, most likely would receive a tax credit, useful for deferring this tax in the future.

Is the tax fair?

Fair tax systems do not punish select groups. The bill as currently written fails this criterion.

The bill primarily punishes the Ivy League and a small number of other elite private universities like Stanford, MIT, Notre Dame and Duke. These four schools, along with seven of the eight Ivy League colleges, would have paid about $200 million of the total tax, according to my calculations.

While lawmakers have expressed concern over large endowments, the tax does not punish universities just for amassing a huge amount of money. I work for The Ohio State University, which has a $3.6 billion endowment, but it is exempt since it’s a public college.

The tax is also unfair even among private universities, since those with large endowments but very small or large student bodies would not be taxed.

For example, Rockefeller University in New York City has a $2 billion endowment, which returned $111 million in 2014-2015. But it does not have enough students to be taxed under the present plan. On the other end, Brigham Young University in Utah has a $1.58 billion endowment and earned $202 million in investment income during that period, yet its large student body means it wouldn’t pay a tax either.

If the goal is to raise revenue from colleges that collect large amounts of tax-free donations, limiting the tax to just a few private institutions is simply punitive.

Another problem is that the proposal uses the number of students to determine whether to apply the tax.

I believe this would allow schools to find creative ways to avoid paying the tax, just as Fortune 500 companies do. The student body figures reported to the Department of Education count part-time students the same as those matriculating full-time. So schools would have to compute a new number based on the “full-time equivalent” calculation, which creates ample room for creative accounting.

For example, many schools provide executive education and extension programs for individuals who are generally not considered students. But you can expect many schools to turn them into students, and the same goes for people enrolled in massive open online courses, or MOOCs. Given that 58 million people signed up for MOOCs in 2016, this would not be a particularly high hurdle.

Republicans presented their plan as a method of simplifying the tax code. The tax on private colleges’ investment income does not accomplish this but rather makes things even more complicated.

If endowment earnings are going to be taxed, a fair approach would be to keep things simple. Just institute a tax on endowment income from all colleges and universities, regardless of number of students or whether it’s public or private. This would have raised about $359 billion – not a lot more, but it would do it a lot more simply, fairly and effectively.

In general, I am not against taxing university endowments or investments. However, if we are going to do it, the tax needs to be fair and not have giant loopholes. The current bill is a punitive mess that is extremely suspect in its long-term ability to raise money.

Author Bio: Jay L. Zagorsky is an Economist and Research Scientist at The Ohio State University