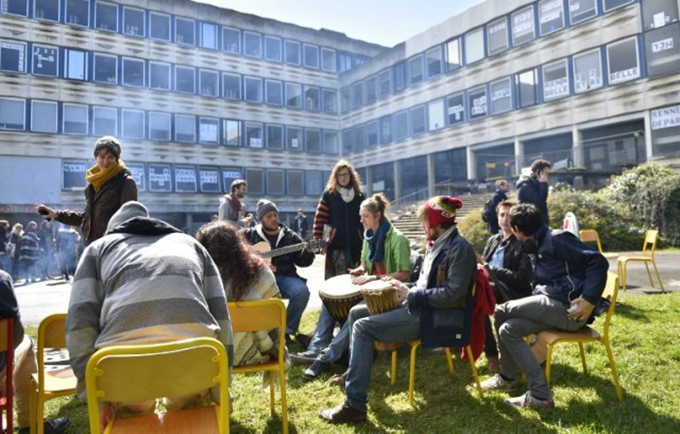 This announcement caused an unprecedented rejection in the university community, student unions at the conference of university presidents, through the Scientific Council of the CNRS. Tribunes and motions have multiplied, at an almost daily pace for two months. A petition collected more than 300,000 signatures.

Faced with these reactions, the Minister Frédérique Vidal has set up a commission of five personalities charged with conducting a consultation on all the points advanced in this plan … except on the registration fees! Economists of higher education, authors of several articles on the issue of registration fees and co-authors with the ACIDES research group of the book Let’s Stop Expenses , we thought we had nothing to contribute to this truncated consultation.

The committee nevertheless wished to hear us, making sure we were open to discussing the whole plan and to include any relevant remarks in its report. This article reviews the main arguments presented at this hearing on February 4, 2019.

Exceptions that announce the rule?

The increase in registration fees for foreign students is only one step towards a general increase. It was indeed preceded by many exceptions to national pricing, whether at Sciences Po Paris , in 2003, then at the University Paris Dauphine , or in many degrees of establishment and international masters, offered throughout France .

In addition to these practical experiments, a long series of reports prepares the generalization of registration fees. We can at least go back to that of Elie Cohen and Philippe Aghion in 2004. From this date, it is both to defend theoretically the rise, but also to define the political conditions for its implementation:

“To avoid coming up against a front of internal and external resistance that would lead to failure, the reform must be carried out step by step, without a thunderous proclamation. “

Since then, Terra Nova, INSEE, the Inspectorate General of the Administration of National Education and Research (IGAENR) and the General Inspectorate of Finance (IGF) or France Strategy and the Court of Auditors have delivered turnkey scenarios to increase tuition fees in universities.

The note signed Robert Gary-Bobo, resulting from the “Macron Leaks” , is all the more explicit that it had to be confidential. In this note, we can read that the rise is “the sinews of the war” and must target € 8,000 in License and € 10,000 in Master. But also that we must not announce this goal, that we must “ban the words of competition and excellence” and replace them with “openness and diversity.” And why not “Welcome to France”?

Banking on a signal effect

The first argument put forward by economists in favor of higher costs would be their incentive effect, which is largely denied by the facts, and especially the rationalization of school choices: higher education should be an individual investment. And too bad if a school orientation consistent with the individual profitability of this investment only reinforces all social inequalities. The students of modest origin, the students, the children of immigrants have all and all less favorable income prospects which would induce according to this rationality less of academic ambition.

On the other hand, potential foreign students would see the current national tariff, very low, as evidence of poor quality, and rising fees would therefore have a “signal” effect, giving the impression that the quality is higher. This central argument of the “Welcome to France” plan is extremely incoherent. Fees in countries that effectively register in the global higher education market, such as the United Kingdom or Australia, are much higher (over € 10,000 per year in license): prices posted in France would therefore remain a signal of mediocrity.

Above all, empirical surveys do not identify a signal effect in higher education, which is not a standard market good. If that were the case, students from all over the world should be jostling in Chile, a country where higher education is the most expensive; but it’s the other way around, Chile has no influx of foreign students.

On the other hand, there is a “distinction” effect (“I can afford an education more expensive than others”) that only works on upper class children, as is traditional with luxury goods. We conducted a surveypublished in 2013 on business schools: students from very well-off households who study at HEC are pleased with higher fees because it reinforces the apparent exception that constitutes their school. A few thousand euros more do not frighten them, especially since they will be supported by their families, as the rest of the cost of their study and their standard of living.

Towards a decline in public support?

Another classic argument in favor of the rise: as it is the children of the middle and upper classes who go to university the most, make them pay for more social justice. The amount of the fees must then be progressive with the income. Developers prefer fresh propose an increase for all but financed through forgivable loans to income (PARC) for the poorest graduates, the repayment of these loans students would be postponed and even canceled partially twenty years after end of studies.

In addition to all the perverse effects of this financialization, this method of financing is not at all redistributive: it is through taxes that one can obtain progressive contributions with income. It is thus more the improvement of the access (and the success) of the popular classes, already engaged with the university massification, which will make it possible to advance towards the equity of the system of higher education.

If the official motivation of the “Welcome to France” plan is to improve the reception of foreign students, we can also think that it is a question of compensating for insufficient public subsidies by private financing: Emmanuel Macron himself explained at the “grand debate” on 4 February 2019. The expenses of foreigners will not suffice, as the reportof the Court of Auditors points out. Even a general increase in nationals would not solve the issue of higher education funding since it would be accompanied by state withdrawal and exponential financial and commercial costs.

In England, the increase in fees in the early years of 2010 was thus accompanied by an 80% reduction in the public subsidy of institutions for higher education. An economy that could quickly be canceled because of the financial costs of state-sponsored student loans, according to the British Institute for Fiscal Studies.

Finally, if fees are to be financed by the fees, the institutions engage in an unbridled competition to attract students. The University of Phoenix (600,000 students) was thus targeted for its marketing expenses, twice as much as the actual educational expenses.

Another perverse effect of funding through tuition fees is the polarization it entails. If institutional resources depend on their ability to attract creditworthy students, then we enter a different dynamic. The best-positioned institutions, in terms of reputation, geographical position, or simply the social composition of the student population, see their own resources explode, while the peripheral institutions, which provide the bulk of the massification of Higher education, on the contrary, see their public subsidy evaporate.

Sciences Po was able to take advantage of its favorable position and its lead in this dynamic to double its student population and invest heavily in expanding its campuses. This is a true primitive accumulation.

The calls for projects that the French superior has been experiencing for the past ten years (in particular the Idex of the Investissements d’Avenir Plan) provide an overview of the polarizing effect of competitive funding at the national level. Although for the moment there are only limited resources in relation to the staffing of institutions, we can already observea 20% increase in polarization between 2007 and 2015.

Putting tuition fees at the center of funding for higher education would have catastrophic effects for the majority of institutions, excluding the Shanghai ranking race, and with them for hundreds of thousands of students.