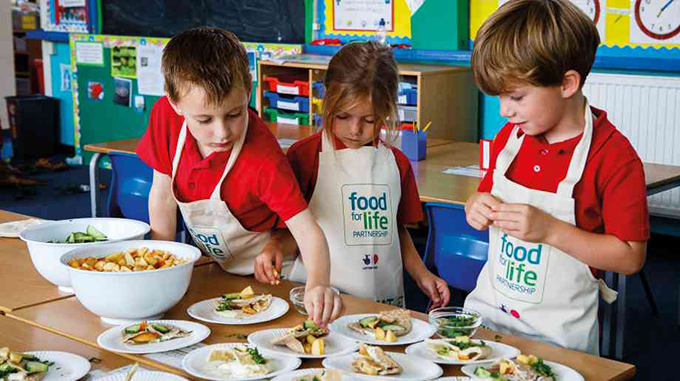 Since ultra-processed products are associated with significantly increased risks of chronic disease , ensuring a healthy diet is an essential vehicle for health protection. The prevalence of chronic diseases is also associated with an increase in social inequalities in health, the most disadvantaged populations being the most affected, and consuming the most ultra-processed foods . It should be noted that the prevalence of obesity, favoring the development of other chronic diseases , rose from 8.5% to 15.0% in France between 1997 and 2012 , reaching 17% in 2015.

In reaction to this evolution of obesity, the public authorities have been acting for twenty years, in particular through the creation of the National Health Nutrition Program . The issue of food education is also emerging: it has been included in the education code since 2016 and is encouraged by opinion n ° 84 of the National Food Council.

Human food is greatly influenced by the representations associated with it: we eat as much what is “culturally edible” as what is biologically. According to sociologist Claude Fischler, it is also, in addition to their culture, the daily and repeated experience of children with their food that influences their food representations.

The issues around food education are therefore absolutely substantial: its organization in public schools could allow children not only to acquire knowledge but also to understand, as future citizens, how their food choices influence their health, as well as that of the environment.

However, attention must also be paid to its pedagogical approach. Indeed, it is known that health claims can be ineffective when they are addressed to populations without taking into account their cultural specificities. Indeed, there is often a “cultural distance” between public health discourse and popular circles, which tends to largely limit their effects. It also seems that the speeches of health which fall under the injunction can not only be ineffective, but moreover stigmatize the populations to which they are addressed.

These few elements provide food for thought about what such nutrition education could (and should not) be. But what is it really like today? A qualitative sociological field survey carried out in elementary schools in the Normandy region showed us that this education is particularly complicated to carry out for teachers, who do not have any training in the subject.

It is thus related to various forms of “education for” , such as “education for sustainable development” or “education for equality of girls and boys”. These are stipulated in the education code, but are not part of a curriculum and are not monitored by education inspectors. In other words, their exercise depends only on the goodwill of the teachers, on their particular sensitivity, but also on the resources at their disposal (in terms of time and energy).

A proliferation of injunctions to exercise these types of “upbringing” often leads to confusion among teachers. For example, we have seen in the field the establishment of a “taste class” as food education, in a school located in a priority neighborhood: this served more the purpose of educating. to “living together” (the children were responsible for bringing back to class food and dishes from their parents’ country of origin), without questioning the effects that food can have on health.

Thus, if food education was designed by the Ministry of Education in order to respond to the health problems associated with it (mainly that of obesity), it seems that, in the field, teachers do what they can with what they have. Most of the schools and teachers we surveyed never addressed the issue of school feeding due to a lack of time and information to guide them on how to do it.

In the current context, we believe that the issue of food education should be considered with more attention, even to the point of considering a national program common to the various schools.

For our part, we have carried out experiments in order to identify practical solutions, both aware of advances in human nutrition and of sociological issues. Based on the thoughts we discussed above, we have arrived at “holistic nutrition education”.

“Holistic” in that understanding the links between food, health and the environment depends less on the acquisition of specific and isolated knowledge than on a general and encompassing understanding. But also because a holistic understanding of the issues specific to these links allows children to get involved in the development of reflection and discussion. The method that we propose consists in communicating to the children catch phrases, easy to understand, which will allow them to speak by mobilizing knowledge which they have personally and which they acquired outside school.

This approach differs from the slogans currently disseminated, insofar as it allows children to become fully involved. For example, we invited 10-year-old children from two schools located in priority neighborhoods to express themselves on a quote from Heraclitus  : “The health of man is a reflection of the health of the earth. ”

While they seemed, when interviewed individually, little concerned and interested in these topics, they were there able to develop a coherent discussion and reflection. One explained that the earth needs trees to breathe, another replied that we need them too, while yet another spoke of the fact that we need bees for pollination.

This discussion helped bring about the more general idea that the way we treat the planet will affect our health, especially because the quality of what we eat depends on it. The children feel directly involved and concerned by the reflections developed. The educator, for his part, leads to a global reflection via catchphrases, and may provide information in question / answer exchanges with the children.

The collaboration of sociology, human food and environmental sciences has enabled us to develop a set of reflections for food education adapted to health and social issues. We believe it is important to teach young people the whole rather than the “parts”, especially about the effects of our food choices on overall health.

The establishment of a reflection on the links between food, health and the environment would allow children to appropriate it, while the teaching of information isolated from each other seems ineffective with children from disadvantaged social backgrounds, who often do not feel concerned by them. We would like to propose to better experiment this educational approach, if possible at the national level and within the framework of a program.