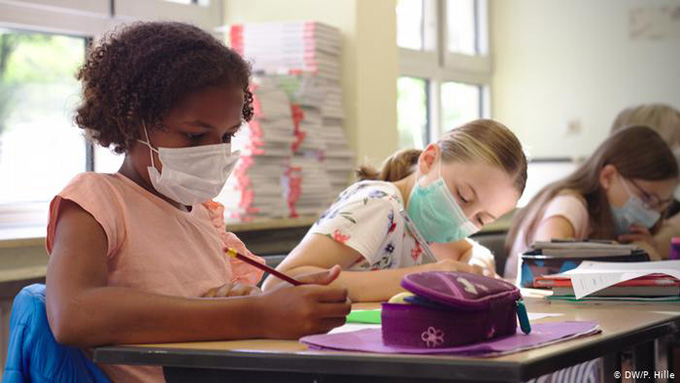 Léa, Nina and Jules have been in first grade for 2 months already. Today, their mistress tells them that they are going to discover a new sound. The teacher writes the letter “s” on the board, turns around and asks the children “What does this letter sound like?” “. Immediately, a small hand is raised. It’s Léa’s. It is quickly followed by three other hands.

Nina and Jules, who don’t know the answer, turn around when they see those hands go up. They hope not to be the only ones in this case. The teacher questions Léa who already knows the sound of all the letters. She gives the answer expected by the teacher, who smiles and congratulates her: “Very good! “. For their part, Nina and Jules wonder how Lea always knows the right answers. Why can’t they do it?

As in this example, the classroom contexts highlight many differences between the children. This may relate to homework and test scores, how quickly and easily children perform various tasks, their preferences for certain areas of school, the way they speak, how they are dressed, etc.

But how do the pupils interpret these differences which are given to see daily? Answering this question is fundamental since a great deal of research in psychology now shows that the way in which students explain these differences has important consequences on motivation, academic performance and the construction of inequalities .

Much research suggests that children’s views on the differences they observe in the classroom are biased. They tend to explain the differences by internal characteristics of people (such as intelligence or motivation), rather than external or situational causes (such as stereotypes, parenting practices).

This bias ( inherence bias ) is due to a combination of things. First of all, it is favored by the properties of the cognitive system, in particular the functioning of the attentional system and memory. For example, compared to factors such as social background, intrinsic factors are more salient and observable – they come to mind more easily, and they are easier to remember.

Beyond the properties of the cognitive system, this tendency is also reinforced by the characteristics of the cultural context . Thus, in Europe and North America, individuals are rather perceived as autonomous entities, separate, independent of each other. Consequently, differences in behavior in general, and in success in particular, are seen there as the product of individual characteristics, free from the influence of social context.

But in cultural contexts where people are seen as more interdependent and connected, in Asia for example, individuals are more sensitive to the effects of situational factors on behavior.

Biases in favor of internal explanations are also encouraged by the characteristics of classrooms . Indeed, in a class, the children are generally the same age, the same teacher, they generally benefit from the same teaching and perform the same tasks.

This apparent homogeneity of the classroom environment, reinforced by the belief in equal opportunities, highlights differences in success, while distracting attention from external constraints that can affect performance, such as stereotypes, differences in the time and resources that children’s families can devote to helping them.

Finally, adult behavior and language may inadvertently reinforce this bias. For example, it is not uncommon to give feedback on student performance or behavior in a way that explicitly or implicitly highlights their personal characteristics. Using terms such as “brilliant” to describe high achievers or consoling struggling students by saying, for example, that “not everyone can be good at math” can accentuate this tendency.

This phenomenon has negative consequences for motivation and success. The classroom generates many social comparisons, and this bias towards internal explanations makes being less successful than one’s peers particularly threatening to self-image.

Interpreting difficulty or lower achievement as being less intelligent causes students to experience stress and negative thoughts, which can deteriorate motivation and achievement. Since students from working-class backgrounds are more likely than others to experience difficulties and to experience social comparisons that are unfavorable to them (in part due to the fact that they have more ‘cultural capital’). far from academic knowledge and expectations), the bias in favor of internal explanations widens inequalities in the classroom .

Similarly, believing that girls do less well than boys in math and science because they are less “good” in these areas may decrease their interest in engaging in these subjects and in science careers. subsequent.

Moreover, beyond the amplification of inequalities, the fact of explaining the differences in achievement in the classroom as the consequence of the intelligence or the motivation of the pupils tends to make these differences between the children appear legitimate and fair, which can be a brake on the desire to reduce them.

This explanatory bias that emerges early in children could also be one of the factors that lead some students to develop a fixed conception about abilities or motivation, seeing these characteristics as stable and unchanging. Believing that personal characteristics (intelligence, effort, etc.) are fixed – the so-called “fixed state of mind” – has negative consequences for children who have difficulty in school. They tend to react negatively – feeling powerless and giving up – in part because they interpret mistakes as a sign that they don’t have the qualities necessary to be successful.

On the other hand, believing that personal characteristics are malleable – the so-called “malleable state of mind” – allows one to be more resilient in the face of failure and difficulty, in part because students see in their difficulties an opportunity to progress.

Can we counteract the negative effects of this bias? And how ? Research conducted with students has shown that highlighting the role of contextual factors in differences in performance is beneficial for success, in particular the success of students from working-class backgrounds. By talking with children, parents and teachers can try to highlight the role of stereotypes, parenting educational practices, etc.

Then, it is important to deconstruct the belief that the differences in abilities are immutable, a belief today contradicted by research in psychology and neuroscience. For example, it is possible to teach students that difficulty is a necessary – but temporary – part of the learning process or that abilities are malleable , and this has positive consequences for success. Finally, it is possible to encourage students to focus their attention on their individual progress rather than on comparison with others, or even to favor contexts emphasizing cooperation rather than competition.

Author Bio: Sebastien Goudeau is a Lecturer in Social Psychology at the University of Poitiers