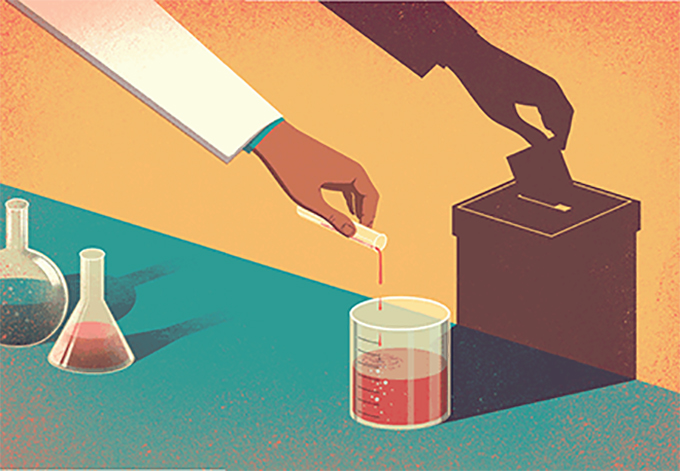 Science and democracy are concepts that have contributed to the common good after a process based on the pillars of Greco-Roman culture. The two have followed sinuous paths, sometimes adjacent, throughout history. And both are in danger.

Inspired by a recent text by José María Izquierdo we launch the following question: do we know what democracy really consists of? Sometimes it is difficult to approach the understanding of a concept through direct observation. That is why we propose to observe democracy through its reflection in the mirror of science.

To support this assertion, we will take the four elements that constitute, according to the sociologist Robert K. Merton, the ethos characteristic of science. That is, the ” set of traits and modes of behavior that make up the character or identity ” of science as an institution. Namely: communism, universalism, selflessness and organized skepticism .

We do not discuss its validity – they do not enjoy unanimous recognition among sociologists of science. Rather, we use them, in full use of the scientific method, to compare both human creations, democracy and science, assuming a certain similarity between the two ethos.

Communism (also communalism and communitarianism) in relation to the scientific system is not what we understand as political ideology. They do share the idea of ​​shared ownership, in the case of science as an institution based on social collaboration and whose product, knowledge, must be shared by the community as a whole.

With the free exchange of ideas – «and certainly requires it; their values ​​are opposed to secrecy, ”said Carl Sagan– and with transparency -“ better in glass houses, to which anyone can look, ”in the words of Max Perutz -.

Everything converges on the vision of progress based on collaborative work, on joint construction. In the face of adanism, it consists in seeing and reaching further on the backs of the knowledge and experience of the ancestors, supported “on the shoulders of giants” – according to the aphorism that is usually attributed to Isaac Newton.

The above implies the recognition and respect towards the results of the research of the professional colleagues who have passed the filters of their own science, beyond their cultural, religious and political ideas and preferences.

Science is universal and impersonal, since its scope is worldwide. Its results are a world heritage site and affect everyone globally.

Current science cannot stand outside of society, nor flee from its legitimacy. It requires citizen participation, and also scrutiny, examination and public control.

Science and scientists work for the common good, for the benefit of the whole society, without preferences or discrimination. Science is a right of citizenship – collected as such in article 27 of the Universal Declaration of Human Rights – and an obligation of institutions – demanded, for example, in article 44 of the Spanish Constitution -.

Disinterest is closely linked to the integrity of those who are dedicated to science and their attitude subject to contempt of fraud, quackery, ruse and deception.

Science is critical, analytical. Work with truths that are not absolute, but always subject to revision for contrast. Each new hypothesis, as well as scientific statements and claims, must be exposed to critical scrutiny before being accepted.

What does democracy really consist of?

Throughout his work, Merton repeatedly points out that the ethos of science “may not be consistent with that of society in general.” However, we have already seen what Carl Sagan thinks about the similarities between science and democracy.

The exercise of politics in democracy is based on the exchange and discussion of ideas, not debate . In the exercise of reasoning, in the contrast of the reasons, in the discourse, in the logos.

This exchange is linked to freedom of thought, expression and respect for the ideas of others. The tolerance of different points of view. Democracy is sharing respect for their own and who thinks differently. Finally, like science, democracy requires transparency.

Like science, democracy aspires to be universal. Merton himself considers that “the ethos of democracy includes universalism as the leading ruling principle.” Democratic politics must abandon any expert elitism, and it is at odds with particular interests. Nor can it stand outside society, public scrutiny and control, citizen participation, whose culmination is the polls.

It goes without saying that dedication to the achievement of the common good is also characteristic of true democracy, in which there is no place for favoritism, nepotism and discrimination. Although, on the other hand, the norms of communism and selflessness do not seem to marry well with the postulates of the capitalist economy taken to its extreme – although Merton himself points out that selflessness must not be equated with altruism or action interested in selfishness -.

Science and democracy require external and internal controversies . “Science thrives in environments that tolerate pluralism and dissent, ” and democracy has to foster such environments. For Sagan, “both require sufficient reasoning, consistent arguments, rigorous levels of proof and honesty.”

This way of thinking and acting, scientific and democratic, is incompatible with ethnocentrism. It is an antidote against ethnationalism and fascism, against supremacism and xenophobic populism. It allows both democracy and science to face dogmatisms, demagogic populisms, totalitarianisms and dictatorships. Also to the bulos and to the thoughtless thought – and the application of this to the democratic exercise of the vote.

Finally, democracy is a right. A right that derives from the duties that every person has regarding the community, related to the satisfaction of the general well-being in a democratic society – Article 29 of the Universal Declaration of Human Rights -. Moreover, in democracy, citizenship is an obligation; Democracy imposes on us the burden of being citizens .

Some authors have questioned Merton’s work, considering that values ​​or principles are part of what science should be, not what it is. Its application to a comparative analysis of democracy, perhaps makes us sin of naive, but we are aware of the prescriptive of this analysis of what democracy should be .

Paraphrasing Rafael Barret , we could say that science and democracy coincide: “None in themselves are good or bad; they are sovereign means of doing good, if good is in us. ”

Everything has already been said – « Toutes choses sont dites déjà; mais comme personne n’écoute, il faut toujours recommencer »- but what we have intended is to bring the scientific value of comparative analysis and the transformative potential of historical memory to the field of reflective dialogue.