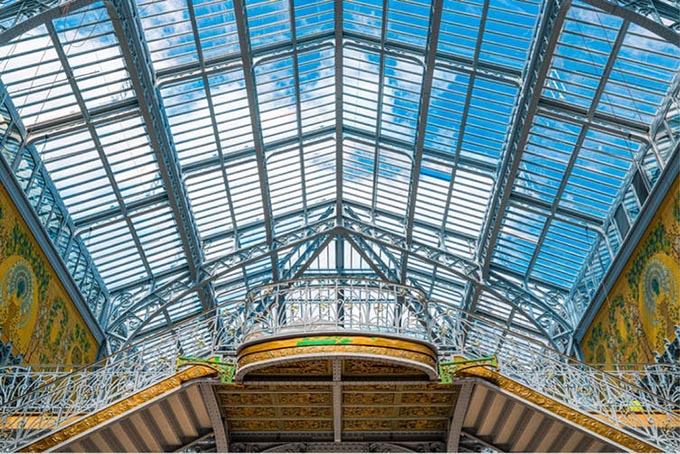 La Samaritaine has just reopened its doors in Paris. Founded in 1860, it is one of the city’s historic brands, along with the Bon Marché (1838), the oldest department store in the capital. These commercial temples became, from the middle of the XIX th  century, the freedom oasis for women, who have found a place where they could finally act independently.

Desire and sensuality as sales engines

Department stores are the direct result of the commercial and industrial revolution, which brought about profound social changes. With one goal, to sell, the target was clear: women. Especially the richest and the most idle of them. All the commercial strategies aimed at prolonging the presence of women in the places of purchase. To achieve this, it was necessary to transgress, always within the limits of decency, bourgeois – or Victorian, customs in the United Kingdom.

To have touched, smelled and even tasted an object made it irresistible, especially when its price was affordable.

Department store designers had already understood the need for what is now called “storytelling”, presenting the department store as a safe, elegant and polished place. Like a second home where all women’s dreams could come true – even if it was above all about creating fashions from scratch and creating new needs.

A place of promiscuity

In the XIX th  century, bourgeois women did not go out alone in the house. If they did, it was only for courtesy visits, small purchases, to go to mass, to carry out works of charity – all activities subject to a rigid morality.

However, as shopping had become a hobby of industrial society, going alone to a department store was allowed. Fixed and affordable prices, catalogs, good deals and the ability to return items attracted these affluent women.

Workers, prostitutes, artists, etc. were also going there in large numbers. All women therefore had access to the same choice of products, which created a form of ambivalence. The prostitute , and the demi-mondaine could easily buy the same dress, the same umbrella and the same gloves as the respectable wife of a businessman or a politician. This is the beginning of the democratization of fashion: it is no longer so easy to know who is who, just by the clothes.

It is now the department store that dictates a certain form of social prestige.

To be able to touch, smell, taste

Émile Zola, in his novel Au Bonheur des Dames (1883), accurately recounts how the visual universe of the department store was designed down to the millimeter. It was a palace of the senses, full of colorful fabrics, ribbons of all kinds, perfumes, dresses, hats, handbags, gloves, hats… And above all, women could finally touch the goods.

Until then, the experience of buying clothes was rather cold. A seamstress came to the house, or it was done in a small shop but always with the filter of what the salesman or the seamstress decided to show. There was little room for choice.

In a department store, on the contrary, customers walk around at ease, touch everything, try everything, and are always accompanied by a saleswoman who will help them get rid of any inhibitions… and convince them to buy.

The saleswoman, from worker to businesswoman

The saleswomen represented this image of decency and cleanliness. Dressed in a uniform, they had to be well groomed, discreet and polite. They had learned the manners of the middle-class women in order to be able to associate with them, and to show a polite submission to their desires. You shouldn’t be too flirtatious either, because the protagonist should always remain the customer, who should feel beautiful, special and the owner of her shopping experience.

For the saleswomen, it was hard work; they could never sit down during long working days and had to be constantly on the move. In return, in addition to their salary, they were housed and fed in the department store itself.

It therefore offered them security and a regular income. In some cases, their savings allowed them to quit that job, return home and open their own stores, as the province was fond of this modern Parisian elegance.

” Where are the bathrooms please ? “

The department stores were huge, bright, with wide aisles, glass ceilings to take advantage of the daylight, and elevators that made it easy to move between floors. But there was an obstacle that limited the time spent shopping.

Women have always found it difficult to stay out of the house for long hours because they could not go to the toilet. Back then, architects paid no attention to toilets in homes, and it was difficult to undress alone with so many petticoats, corsets, lace, bows, etc. Le Bon Marché was aware of this obstacle and had elegant art deco style toilets built.

Another factor that reduced the time spent shopping: husbands, when they accompanied them. It has been discovered that women shop more with friends than with their husbands. This is why Le Bon Marché set up a reading room, with books and newspapers, where men could wait quietly, reading and smoking.

The daily life of middle-class women in the mid-19th century could be stifling. They were not considered adults and depended on men for everything.

Gustave Flaubert’s novel, Madame Bovary (1856), tells the story of the existential agony of a woman who lives tormented between an empty outer world and an inner world full of frustrated aspirations, and without any sex life. An existence subjected to the anguish of living in a social cage, without the possibility of escape.

Many of these women were labeled as hysteria: a nervous illness that caused mood swings, hot flashes, anger and sadness.

This emotional and sexual life of women was theorized by physicians: Paul Briquet thus published Le Traite Clinique et Therapatique de Hystérie (1859) in which he interpreted the disease as a “neurosis of the portion of the brain intended to receive impressions. affective and emotional ”. The neurologist Jean-Martin Charcot , he tries to cure them thanks to hypnosis. He organizes demonstrations of hysteria attacks in his Tuesday lessons at the Salpêtrière Hospital in front of a select audience, as if it were a theatrical performance. During this time, the women continued to suffer and depress.

This is why the department stores were filled with women eager to travel on their own to see, touch, desire and buy. Their dreams seemed to come true, they could feel like they were escaping, and the sales strategies appeased their desire for freedom. In the department store, everything revolved around satisfying their whims. They were listened to, pampered and desired: finally, they felt they existed.

This release of emotions gave birth to kleptomania, considered at the time as a female pathology.

The study of Nacho Moreno Segarra Ladronas Victorianas. Cleptomanía y género en el origen de los grandes almacenes , The Thieves of the Victorian Era. Cleptomania and Gender in the Early Years of Department Stores (2017) discusses how department stores relied that each day there would be a specific number of thefts. There were hundreds of shoplifters in Paris at the time. Some doctors have wanted to attribute this phenomenon to menopause or menstruation – further pathologizing the body and female behaviors. What seems certain is that for many of them, the pleasure of flying – and therefore breaking the rules – was greater than the pleasure of paying.

Kleptomaniacs – mostly bourgeois – were treated with great courtesy and discretion. If husbands found out, they were amazed to find that their wives seemed unable to control her impulses and resist temptation. This transgression of the rules of morality and decency, associated with the fear of what will be said, frightened them to the highest point.

They had no idea that this space, cluttered by the comings and goings of dresses from all social classes, would help awaken in them an ever greater desire for freedom.

Author Bio: Ana Maria Iglesias Botran is a Professor of the Department of French Philology in the Faculty of Philosophy and Letters. Specialist Doctor in French Cultural Studies and Discourse Analysis, at the University of Valladolid