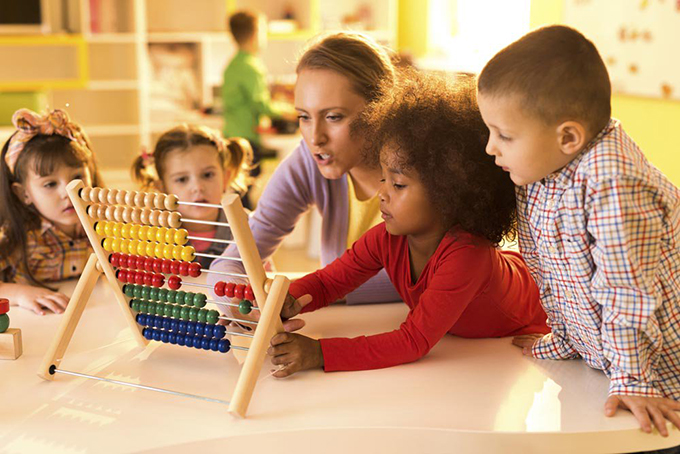 If you’re a parent of a preschooler, you might be wondering how you can help set your child up for success once they enter kindergarten.

By now, you have probably heard of the importance of reading and talking to your child to support their language and literacy skills. You may have even made reading, talking and learning the ABCs part of your daily routine.

But did you know that you can also support your child’s math learning during everyday interactions at home?

We conduct research that aims to define the broad array of early skills that support mathematical thinking. Our goal is to get parents more familiar with the important role they can play as their child’s first teacher to lay the groundwork for learning math.

Young children need to develop several different number skills. For instance, they need to master counting aloud from one to 10 and beyond and learn to identify written numbers like 2 and 4.

In addition, little kids should realize that each number word and symbol represents a specific quantity of objects. That is, the spoken word “four” and the written number 4 are the same as four cookies or four apples. They need to know that they can count to determine how many of something is in a set.

Young children are also beginning to understand the concepts of addition and subtraction, even if they cannot do the math by themselves. And they need to start seeing which numbers are bigger or smaller than others.

Where the things are

Examples include remembering and reproducing a series of events, such as where and in what order different parts of a toy light up.

A different type of spatial skill allows kids to imagine what a shape, such as a square, would look like if you broke it in half and changed its orientation.

Another skill that may seem less directly math-related is making and understanding patterns – sequences that follow a rule.

Simple repeating patterns are especially appropriate for young children. They follow a rule that one part of the sequence repeats over and over again. For example, in a red-blue-red-blue-red-blue pattern, that part is red-blue.

When families of young children do everyday activities that support early math at home, they tend to focus on number-related activitiesrelated to directly teaching counting and naming numbers.

For the best results, branch out. You can support number skills through playing board games and card games.

Classic board games like Chutes and Ladders help children learn to recognize written numbers on the spaces and spinners. They also help children see numbers laid out in order, which can allow them to better tell which of two numbers is bigger.

Playing cards are especially helpful for learning to recognize written numbers and counting and labeling sets of objects, such as all the spades or diamonds. Additionally, simple card games like War can encourage families to directly compare the size of numbers side by side.

Cards can also lay the groundwork for learning subtraction when kids try to compare card quantities more exactly. For example, the 5 of hearts has two more hearts than the 3 of hearts.

To support spatial skills, research suggests engaging your child in play with puzzles, blocks and shapes. When parents and kids do these activities together, they naturally use spatial and directional words like “over,” “under” and “next to” that help children get ready to learn these concepts at school.

At the same time, kids can get a head start on picturing how to create shapes and other objects out of individual blocks. 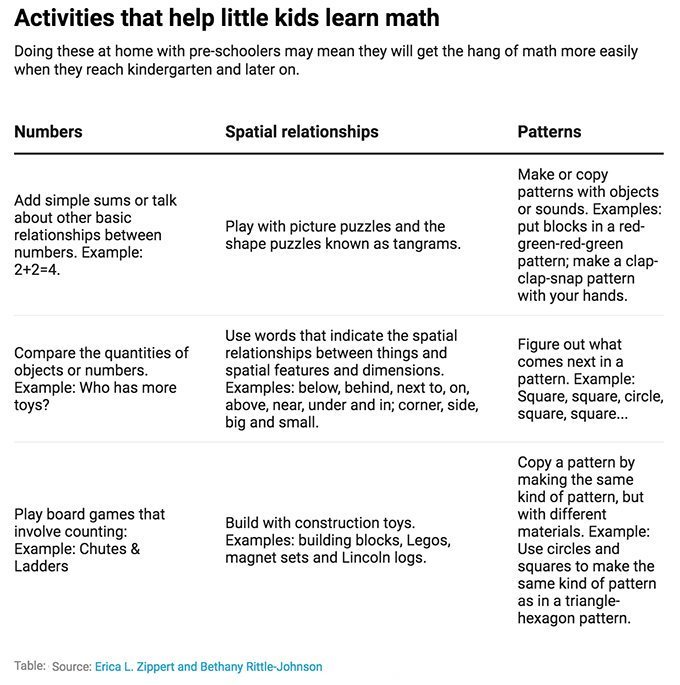 There are many fun and easy ways to emphasize patterns at home.

One is having children fill in a blank in a model pattern: red-blue-red…red-blue. Another task could involve keeping a pattern going.

These include replicating patterns with different materials. Given a model pattern of alternating red and blue Legos, children can make the same alternating pattern using orange and green buttons or other items you happen to have handy.

Children can also use their pattern skills to get more adept with numbers. For example, see if they can count off odd numbers: 1, 3, 5, 7, 9. Explain that the rule of the pattern is either adding 2 each time or skipping the next number.

>Author Bios: Erica Zippert is a Postdoctoral Scholar of Psychology and Bethany Rittle-Johnson is an Associate Professor of Psychology both at Vanderbilt University