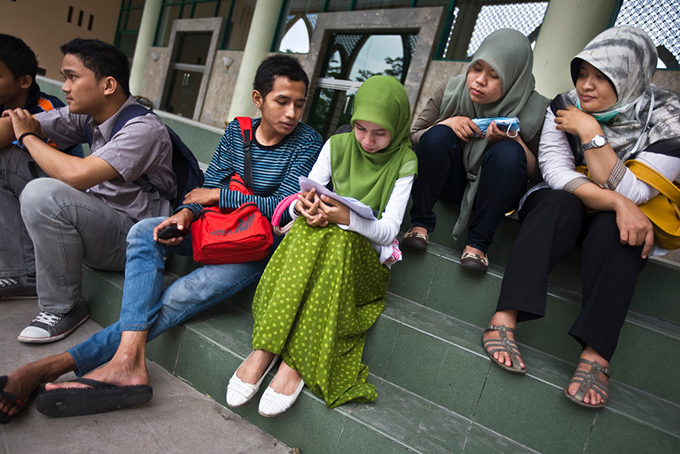 Nationally, the number of private tertiary institutions (around 3,000) is far more than the national tertiary education institutions (122 units) . Of the 6.9 million Indonesian students , around 32% (2.2 million) study in state universities and 68% (4.7 million) in the private sector. Private universities increase community participation in obtaining tertiary education amid the limited capacity of the state campus.

The increase in access that is now urgent is to increase access for disadvantaged groups and people with disabilities. However, if the expansion of access is not accompanied by an increase in quality it is feared that it will increase the number of unemployed scholars.

Until now there are no private universities that have entered cluster 1 (top) ranking of the best non-vocational universities version of Kemenristek Dikti 2018 .

There are fourteen universities that are in cluster 1, all state universities. This is understandable because they first entered the higher education market and were supported by quality academic resources, as well as the state budget. Until now, private universities have just entered the cluster 2 ranking of Kemenristek Dikti 2018 .

If you look at the context of business, competition universities in Indonesia, including the category of gray areas and no camouflage ( disguise ) . Unlike the context in developed countries that explicitly categorizes education into the realm of for-profit business , the Indonesian Higher Education Act normatively states that higher education is a non-profit institution.

However, at the 2019 National Work Meeting, the Ministry of Research, Technology and Higher Education in its presentation on the strategic inflection point stated that higher education also entered the realm of business, especially the service business.

When compared to neighboring countries that might have better quality education such as Malaysia, the average tuition fees at private universities to graduate in Indonesia are twice as expensive as tuition fees at PTS Malaysia. According to ADB research , the average tuition fees (costs up to four years average) in PTS Indonesia amounted to US $ 10,168 (around Rp145 million), compared with Malaysia ranging from US $ 5,496-US $ 8,765 (around Rp78 million-Rp125 million) .

Tight competition, especially in fighting for students and resources, occurs in the higher education environment. Funds obtained from tuition fees paid by students are important energy to revive higher education. If a university gets a lot of students, meaning that it also gets more funding, the funds can be used to increase the quality of education both by increasing the capacity of lecturers and by adding learning support facilities.

For example, competition for new students. PTN legal entities open new student seats more than before . In fact, ITB has developed a wider campus since a few years ago , including in Jatinangor Sumedang. In the next 10-20 years, ITB will increase the number of students from 20,000 (generating 3,000 undergraduates per year) to 50,000-100,000 students(producing 5000-10,000 scholars). UI also does the same thing by opening vocational classes , as well as UGM .

This shows that universities also consider tuition fees from students to be a significant financial source. In the context of PTS, financial resources are a serious problem for paying lecturers, support staff, overhead , and building infrastructure to support good institutional knowledge governance. If private campuses continue to live and excel competitively, they must prepare themselves quickly and planned to be able to produce innovations that support the continuation of their education business.

In terms of funding, the PTS merger policy might solve the problem of financial shortages in the short term so that universities that are less financially sound get a solution .

The problem above requires a comprehensive solution and involves many parties. Private universities cannot be left alone struggling to overcome the problem. The government has an important role as a regulator and creates a competitive higher education ecosystem while developing. The following are policy recommendations to strengthen PTS in Indonesia:

In the midst of increasingly fierce competition, managers of private universities need to develop innovations at both the management and study programs to remain relevant to the changing digital era.

Author Bio: Astadi Pangarso is an Administrative Science Doctoral Candidate at the University of Brawijaya