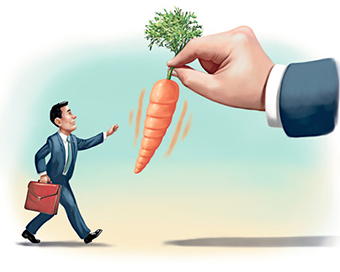 Rent seeking is a term coined in economics to describe the process by which private entities seek to use the state’s power to obtain or protect excessive economic surplus.

A classic example of this behaviour is when a monopolist bribes politicians or officials to protect or maintain the monopoly power that allows the company in question to charge excess prices and earn excess profits.

But the idea of rent seeking can be applied more broadly. Economist Robert Tollison described the analysis of rent seeking as “the study of how people compete for artificially contrived transfers”. In a recent paper, I argue that Tollison’s description provides a useful framework in which to understand the dynamics of modern academia.

Governments and universities are effectively encouraging academics to behave like rent seekers. This has negative effects for the integrity of academics and academic institutions. It’s also bad news for society at large. My paper focuses on South Africa and on how financial incentives, institutional rankings and the valorisation of grant funding encourage rent seeking behaviour among academics.

Such practices originated in developed nations. But it may be particularly harmful for developing countries to adopt these mechanisms.

The push to publish

In South Africa, as in some other countries, academics and their institutions receive incentives for publishing in certain journals. In some cases this includes receiving a proportion of the government incentive in cash.

These journals are accredited by the country’s department of higher education and training, supplementing various international journal indices with other (mostly local) journals. The government incentive translates into approximately R120,000 ($9,000) per “unit”. A peer-reviewed, accredited journal article or book chapter by one author equals a unit; this is then divided by the number of authors.

The intention behind paying universities and academics for books, chapters or articles in accredited journals is good. It’s designed to encourage South African academics to produce more peer-reviewed research. The hope is that this will improve the extent and quality of the country’s academic research.

But it’s not obvious that financial incentives are the best way to pursue such objectives. More problematically, there are reasons to believe that an approach based on explicit incentives could lead – and has led – to very different outcomes.

A number of academics have pointed out that such a system creates incentives to publish in accredited journals with the lowest quality requirements. In economics, for example, getting even an excellent paper into a top international journal can take between two and five years, whereas getting a weak paper into a local journal can take a mere six months.

In some cases it indirectly encourages fraud in the form of plagiarism. Unethical arrangements can also develop between institutions, or individuals, and publishers.

The global ranking of universities is another phenomenon that’s driving rent seeking behaviour.

The obvious problem with rankings is that at best they only reflect relative rather than absolute quality. A university could improve a great deal on various dimensions, but still fall in the rankings. It’s a zero-sum game. This is compounded by the fact that the various metrics on which rankings are based don’t necessarily represent what’s socially important: the quality of teaching, locally relevant research or developing high calibre academics for the future.

So the pursuit of rankings may mean pursuing things that are not beneficial to the university or society at large. It may also lead to universities expending resources “rigging” these metrics, rather than directing the resources at their key work.

These kinds of dynamics are likely to cause even more harm in developing country higher education systems than the developed country systems in which they originated. The broad literature on rent seeking suggests – such as with the “resource curse” – that the prevalence and harms of such behaviour are worse where institutions are weak. In academia this means not just accountability structures, but especially the quality of existing academics and academic institutions.

Academics who are not equipped to produce and publish work that makes a substantive contribution – intellectual or other – are pushed to publish anyway. Institutions that are poorly resourced are judged by their rankings. These individuals and institutions are likely to follow the paths of least resistance in pursuit of short-term funding and status.

All of this distorts the behaviour of academics already within the system. It can also affect who decides to enter and remain in academia. Good academics can be driven out and rent seekers can rapidly ascend the hierarchy.

There have been some attempts in South Africa to respond to the perverse outcomes of these incentives. For example, the new Research Outputs Policy published by the Department of Higher Education & Training in 2015 pleads that

Institutions and academics must remember the importance of research integrity when submitting their claims.

But appeals to academic integrity don’t make a lot of sense when the entire system is built on the assumption that individuals have sufficiently little commitment to the academic project that financial incentives are needed to get them to do quality research.

Accountability mechanisms in academia are important given the public funding and social role of universities. However the use of incentives, rankings and similar mechanisms may well be causing more harm than good. In developing countries it may also compromise the longer-term process of building credible, high quality academic institutions.

Rapid, dramatic changes to the existing system may be ill-advised. But more needs to be done to develop mechanisms based on intrinsic motivations of committed, quality academics. And it’s important to limit the harms currently being caused by rent seeking.

Author Bio: Seán Mfundza Muller is a Senior Lecturer in Economics at the University of Johannesburg