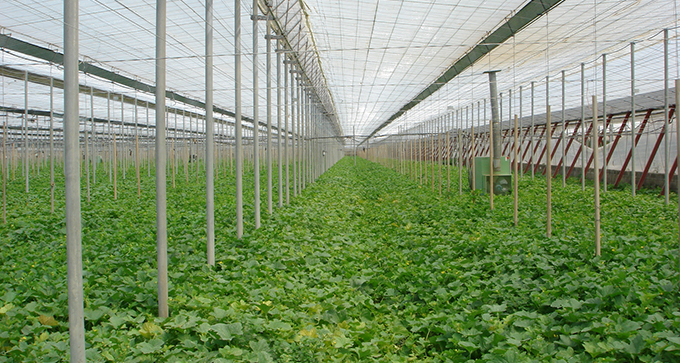 Following a study conducted by a known trellising net manufacturer in collaboration with the Universidad Autonoma de Sinaloa, the quality of melon crops can be greatly enhanced by using greenhouse cultivation methods, resulting in greater yields per hectare of up to 110 tones.

Professor Felipe Ayala, who works as an investigator along with agronomists from UAS’s Faculty of Agronomy, tested five melon varieties for commercial production, with a soil-based cultivation system and one or two stemmed plants. They grew the crops vertically and tutored them with horticultural netting and raffia.

Testing the possible yields of some cantaloupe and honey dew melon varieties was the main purpose of the experiment. Using trellis netting as plant support, the plants were grown in a vertical direction, which gave them better support than the standard raffia tutoring.

Melons grown in open fields experience a variety of challenges: an inability to adapt to their surroundings, insufficient fertilisation that stunts the growth of their fruits to mention just two. Moreover, agronomists emphasis the problems that arise from the plants being in consistent contact with damp soil, as well as over-exposure to solar radiation resulting in scorched fruits, not to mention the hazards of weeds and plant pathogens.

Cultivating the crop in greenhouse conditions is one way to combat these problems. Using pruning and tutoring methods, and planting directly into plain soil, leaving a gap of 1.6m between the planting beds and a distance of 33cm between plants arranged in single rows, a plant density of 18, 750 can be achieved in each hectare. 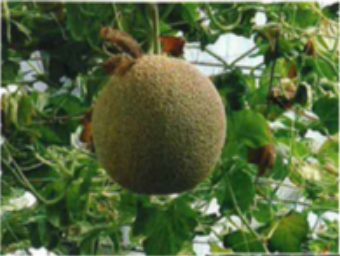 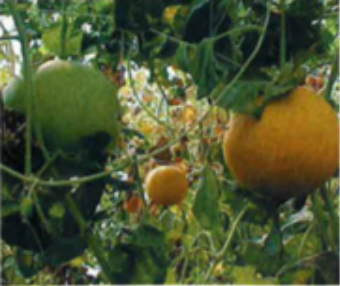 The manufacturer and UAS’s report details that the period of production started in early March when the plants were planted into argillaceous soil containing little or no organic matter and having a low alkaline pH level. By mid-April the plants had begun to flower, at which point the support netting and raffia was installed to tutor the plants. Stakes were placed at 2.5m intervals with the netting in order to support the first segment at a height of 1.5m off the ground. Once the plants had reached this height, a second section of netting was attached onto the support system. Next, both segments were attached onto the top in order to form a frame to support the plants. Raffia twine was used to fasten each plant depending on the number of stems it had, and was attached to the base of the plant using tutoring rings, as well as to the wires in the upper section. To be able to direct one-stemmed plants to grow in a certain direction, all branching stems protruding from the main stem were pruned away during the first fifty centimetres of growth, explained Juan G. López, “Higher than that, branching stems were removed above the point where leaves appeared beyond any buds with new fruits”. In addition to the main stem, another stem was left in place on two-stemmed plants, but both of them had all their secondary stems removed as with the one-stemmed plants.

The production cycle continued for twenty weeks as a result of the correct amounts of water and nutrients being applied, according to the stage of growth that the plants were at. To produce a crop with medium fruits and stems up to 6.5m in length, an average of 7 to 12 kilos per metre squared, Juan G. López lists the necessary nutrients as 210 units of nitrogen, 340 units of potassium, 55 units of magnesium, 180 units of calcium and 150 units of phosphorus.

Crops that were pruned back to two stems had an average stem length of 5.2m when raffia tutoring was applied and 5m when netting was used, producing widths of 1.2cm. The method of tutoring was not a factor in the widths produced. Plants pruned to just one stem grew to 4.4m with raffia and 4.6m when horticultural netting was used, and produced widths of 1.05cm, also irrespective of the tutoring method. 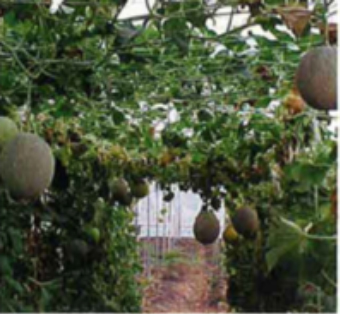 Yields of 6,543 Bruce-type cartons were produced by tutoring with Hortinet support netting and pruning to one stem.

At the end of May, the crops began to be harvested, an activity which continued for 57 days. The acimarron and Copa de Oro melons produced the greatest yields, when pruned back to one stem and tutored using support netting. The fruits’ size and quality was beyond what the team had anticipated, with well-proportioned patterning and colour found across the yield. The cantaloupe melons had an average of 9-10 Brix degrees and the honey dew melons had 12.5 degrees.

This test has proved that melon plants grown vertically and tutored correctly facilitate plant health and ventilation. Furthermore, greater exposure to solar radiation was proven to result in greater yields of higher quality.

“After excellent flowering, we made sure we fastened the plants securely which gave us better chances of effective pollination. The fruits went onto mature swiftly,” comments Professor Ayala. The team concluded that growing the plants vertically allowed for better ventilation, regulation of their growth and easier phytosanitary treatments, which in turn stimulated the production of fruits which were free from deformities.