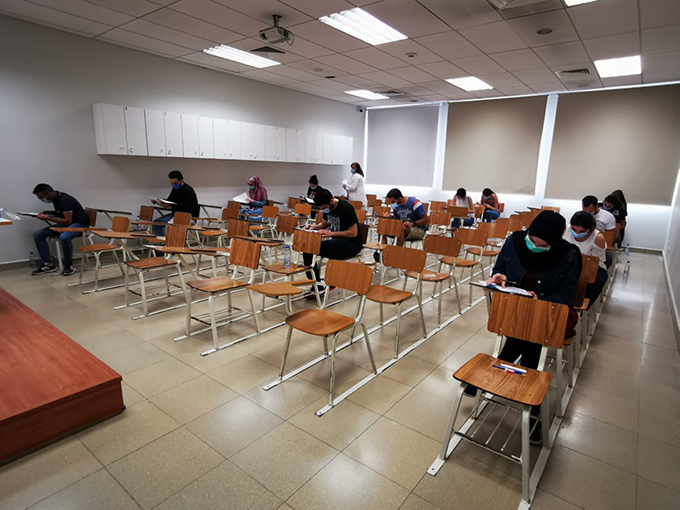 Every day, when I pass my campus’ empty parking garages and dark, deserted buildings, I cannot help but think of the Maginot Line.

It is not so much the visual impact of so many concrete outposts that reminds me of the series of defensive fortifications built by France after the First World War. Nor is it the occasional glimpses of masked students moving furtively between them like nervous soldiers. It is what those French outposts became.

Let me explain. Since the early 2000s, state universities in the US have been transformed into colleges in states of crisis. Legislatures in both red and blue states have dramatically tightened the financial screws such that at the end of 2018, overall state funding for public two- and four-year colleges was nearly $7 billion less than on the eve of the Great Recession in 2008.

To stem this financial haemorrhage, universities have steadily raised tuition and multiplied student fees. And in their increasingly intense competition for a decreasing number of enrolments, they have engaged in a mad race to make themselves more attractive, transforming their campuses into resorts replete with wellness centres, sports stadiums, climbing walls and, increasingly, lazy rivers. As the president of Louisiana State University put it in response to criticism for investing $85 million in its own lazy river complex: “We’ve got nothing to lose. We’ve been cut 16 times in nine years.”

Although it has yet to dig a lazy river, the administration at my workplace, the University of Houston, no doubt sympathises. Since 2008, revenue from our legislature has been cut by nearly 7 per cent and now covers less than one quarter of our operating budget. These cuts arrived as the administration, in search of a stable revenue base, was transforming what had been a largely commuter school into a residential university. Many of the buildings that now stand empty, including a football stadium and luxury lofts, were built so that students (and their wallets) would come.

But will they come back in a post-Covid world? Scepticism is mounting. In a recent issue of the Harvard Business Review, Sean Gallagher and Jason Palmer insist the pandemic has pulled the pillars from an already collapsing business model. We have hurtled from “the ‘time before,’ when analog on-campus and degree-focused learning was the default to the ‘time after’ when digital, online career-focused learning” is the focus. Michael Smith, professor of information technology at Carnegie-Mellon University, agrees. Universities will soon resemble “other disrupted industries, such as retail, travel, media and entertainment, where overconfident firms with overpriced products were decimated by new digital competitors,” he argues in Foreign Policy.

Do students feel the same? No one knows for sure and, amid that uncertainty, hopes have flourished. Houston’s administrators believe that if the vaccine rollout is a success, 2021-2022 will be like any pre-Covid year, when only about 15 per cent of courses were either hybrid or online. As someone who much prefers in-person teaching, I dearly hope they are right. But these assumptions clash with the findings of their own student survey last fall, in which 52 per cent of respondents revealed they would not attend any face-to-face classes this spring, while another 10 per cent would consider only one such class.

Obviously, the pandemic is still very much with us. But roughly half of students in both my online and in-person classes – I have taught one of each both semesters – seem happy with the freedom that online classes have offered. Although their reasons vary, they are mostly compelling. I was not surprised when some cited practical concerns, ranging from work schedules to tedious commutes. But I was surprised when others gave more personal reasons. For example, more than a few revealed that they suffer from anxiety disorders and have found online classes less stressful and more fruitful.

Of course, all this is impressionistic. No one, including the students themselves, can say with certainty whether they will return to campuses in the same numbers this fall. But it seems fairly certain that the dizzying sums of money universities have invested in lazy rivers will not allow them to swim against the digital current for long.

This brings us to the Maginot Line. Its architects believed they had learned the Great War’s lesson. Defensive strategy trumped offensive strategy, so billions of francs were poured into digging trenches and building forts along France’s eastern border to prevent the Germans from sweeping across it ever again.

But the Germans, having glimpsed the speed and flexibility of armoured tanks, learned a different lesson. And when Hitler’s panzers punched through the Ardennes in 1940, the world discovered it was a deadly lesson. Rather than planning for the last war, the Germans had planned for the next.

If we in higher education were planning for future survival battles, should we not similarly consider an offensive, creative posture, where classrooms are capable of moving, when required, to off-campus locations without even the need for caterpillar tracks? Where degree programmes can be streamed, streamlined or otherwise made more agile?

You can now take guided tours of the Maginot Line’s concrete citadels, those monuments to the dangers of wishful thinking. If university administrators take the same defensive approach as the 1930s French government, they risk a similar fate for their campuses.

Author Bio: Robert Zaretsky is a Historian and Professor in the Honors College, University of Houston.