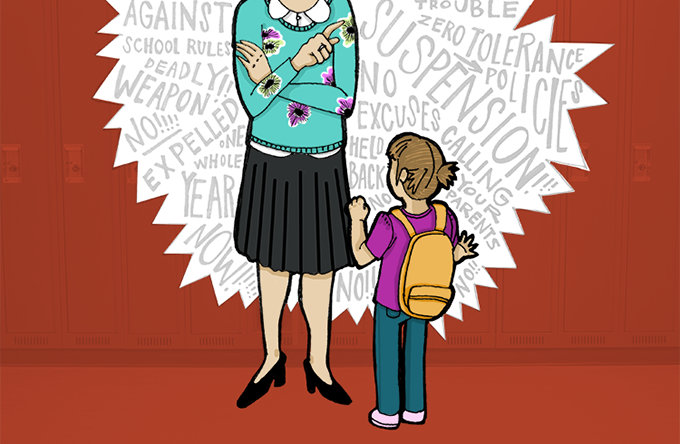 When parents and educators discuss school discipline, one of the things that comes up most are “zero tolerance” policies. This term is often misused and misunderstood, according to new research I published recently.

Zero tolerance policies are also thought to be widespread. But, my work and a recent report show they are actually less common than frequently thought.

Zero tolerance policies are likely to get more attention now that education secretary Betsy DeVos has repealed Obama-era guidance that sought to reduce suspensions, particularly among children of color. Some claimed that the guidance may have made things worse – and even contributed to school shootings – by discouraging schools from reporting problem behavior.

A better understanding of zero tolerance is important, then, as schools nationwide once again grapple with the proper approach to discipline. Below, I explain some basic facts about zero tolerance policies and how prevalent they are in America’s schools.

Zero tolerance policies require specific and generally serious responses – such as suspension or expulsion – for certain types of student misconduct. The Department of Education’s Office for Civil Rights defines a zero tolerance policy as one that “results in mandatory expulsion of any student who commits one or more specified offenses.”

As early as the late 1980s, a handful of states had already adopted such laws for offenses like drugs or assaults. The 1994 passage of the federal Gun-Free Schools Act resulted in the expansion of mandatory expulsionpolicies for firearm offenses to all states. Wider use of zero tolerance approaches by schools for other offenses, such as tobacco and alcohol, soon followed.

These kinds of broad definitions might rally people to join the cause of school discipline reform. However, they also muddy the water when it comes to understanding the scope of actual zero tolerance policies and efforts to reform specific practices of schools.

For example, research I have conducted with education policy expert Maida Finch of Salisbury University shows that exclusionary forms of discipline, like suspension, are an option for infractions at many schools but usually are not required. Instead, exclusionary forms of discipline are often part of a tiered system in which other interventions are tried first. A tiered system might be viewed as “zero tolerance” based on a broad definition like that used by the Advancement Project. However, it is a far stretch from being zero tolerance in actual practice.

How common are zero tolerance policies?

In a recent study, I found that, as of 2013, only seven states and 12 percent of school districts had discipline policies that used the term “zero tolerance.” While almost all states and about two-thirds of districts had a policy that required expulsion for certain infractions, these state laws and district policies overwhelmingly applied to serious infractions, like bringing a gun to school.

This focus on serious infractions in laws and policies contrasts with many media portrayals of zero tolerance. Based on my research, media portrayals of zero tolerance are more likely to focus on minor offenses. For example, the term “zero tolerance” has been used by the media to refer to situations where students were suspended for minor offenses, such as failing to wear a student ID badge, but only after multiple violations of the rule.

The lack of broad presence of zero tolerance policies is, in part, a result of states adopting more laws that scale back exclusionary discipline and fewer laws that call for exclusionary approaches.

Are zero tolerance policies the enemy?

During the 1990s, proponents of zero tolerance discipline saw it as a solution for school violence. They also saw it as a way to ensure unbiased discipline by removing discretion from school staff. For example, in 1995 Albert Shanker, then-president of the American Federation of Teachers, stated: “The way to make sure that this is done fairly and is not done in a prejudiced way is to say, look, we don’t care if you’re white or Hispanic or African-American or whether you’re a recent immigrant or this or that, for this infraction, this is what happens.”

To the contrary, however, studies have found that zero tolerance policies can increase suspensions and exacerbate racial disparities in discipline. They may also yield little benefit in terms of improved school climate.

Addressing zero tolerance policies is important. However, in my view, it’s important to look beyond zero tolerance. In general, almost half of suspensions occur for less serious infractions, like defiance or disruption. Students are being suspended for these infractions even when there isn’t a zero tolerance requirement in place.

Perhaps if everyone were more clear about what is and what isn’t zero tolerance, it would lead to more productive discussions about how to reform school discipline and improve outcomes for students.

Author Bio: F. Chris Curran is an Assistant Professor of Public Policy at the University of Maryland, Baltimore County