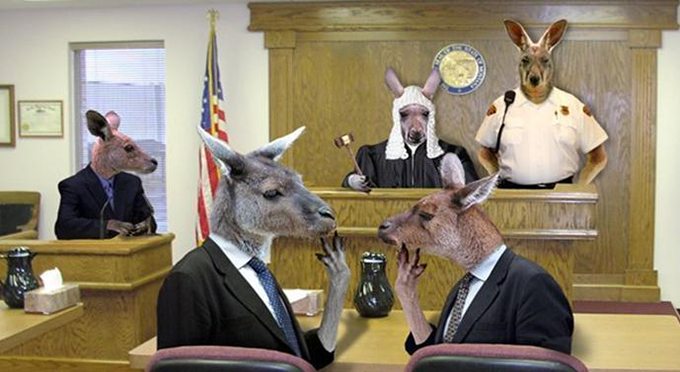 The kangaroo campus court system is doing a fine job of wrecking lives; it has way too much power, and is devoid of anything resembling the checks and balances system necessary to anything resembling justice. Instead, our campus courts are merely reinforcing the totalitarian infantilism that has become the trademark of many of our universities.

Thanks to endless indoctrination in our public schools, our high school graduates grossly overrate going to college and getting a degree. Outside of sportsball players, a life can hardly be ruined by leaving college, and we have plenty of tales of lives horribly damaged by staying in college. Despite this evidence, our students can hardly be blamed for thinking college is everything—they’ve been told as much since birth, or nearly so. There are quite a few kids who, coming out of high school, can feel positively suicidal if they’re denied college, and even more suicidal if they’re kicked out of college. So, you want to have a good reason for removing a student from academia (you know, for something academic, maybe)…our kangaroo system doesn’t care about such things, however.

Allow me to give a very quick summary of one of the latest kangaroo court outrages: there was an incident in class between two students. The kangaroo campus court convened, and kicked one of the students out of the class; there was no violence, or shouting, or anything like that. The removed student was so distraught that he killed himself. The father is suing the university over it.

There are two sides to every story, but the above is agreed upon by both parties. Let’s hear what the campus paper had to say:

–emphasis added. Which was it? Why add the option of violence when a simple question could have ruled that possibility out?

Isn’t it neat that even the most egregious acts of cheating by students won’t merit removal of the student from the classroom, but an accusation of is more than enough? Cheating goes to a different court system, though both are controlled by admin. As soon as there’s a complaint of a sexual nature, a particular type of kangaroo court is set up, as per our federal Title IX rules.

Title IX, particularly the kangaroo aspect of it, has only been controlled by admin. So, the kid makes a complaint, and administrator starts the process:

Gee whiz, what a nice title, associate vice president for Student Affairs and dean of students. There’s no “or” here, so I guess I can read it as two different titles Hey, the first title alone is twice as long as Heather Snow’s name. I maintain that if we ever do decide to bring higher education back to sanity, we’ll need to simply eliminate all positions whose titles are more than twice as long as the title-holder’s name. It’s a silly rule, I admit, but compared to all the other silly rules I work under, it has the advantage that it would improve education.

And Klocke would likely not have killed himself.

Anyway, the associate vice president for Student Affairs and dean of students helps write up the complaint and passes it off to another administrator:

…instructed Daniel Moore, Academic Integrity associate director, in the handling of the case’s investigation, according to the suit.

I ask the gentle reader to note that the title of Academic Integrity associate director is yet again twice as long as the holder’s name. Our campuses are drowning in functionaries like this, they really need these huge titles to distinguish themselves from each other.

How did the complaint start? Here goes:

The lawsuit states that Watson made unwanted sexual advances toward Klocke during class on May 19, and that after denying those advances,

Watson, a gay male, allegedly made sexual advances towards Klocke, who rejected the advances…but Klocke was removed from the class. How demented has our system become that rejecting a homosexual’s advances is a punishable offense? Ok, this is just what the lawsuit alleges but…it’s consistent with Watson’s complaint about being spurned.

Anyway, why is the Academic Integrity associate director involved? There’s nothing about this case even remotely relevant to academic integrity. And here’s the paper’s explanation:

Moore testified he was often involved with disciplinary proceedings involving academics, according to the suit, but harassment allegations were usually presided over by Community Standards director Charity Stutzman

The paper mentions Klocke was charged with violations, but doesn’t mention the punishment or anything else. Was Klocke’s removal from class strictly based on hearsay determination from some guy who’s just standing in for the job? Imagine if you went to court and the janitor hears the case because the judge called in sick that day…honest, these are well described as kangaroo courts.

Now, I’ve mentioned before that admin has taken a page from the Left’s playbook and subverted the campus newspapers. Don’t get me wrong, I know everything is going to have a bias, but people don’t understand that what I’m quoting above is simply administrative propaganda. Luckily, the school paper allows comments (and, gentle reader, be very suspicious of news sources that don’t allow comments from readers correcting lies/inaccuracies). In this case, the comments section shoots up many red flags that something’s not right about how the paper presents what’s going on here:

A lot of people are complaining about this article being one-sided, yet they fail to realize both “reporters” failed to interview anyone from either side. Thomas Klock’s family, Heather Snow, Nick Watson, or even the school. Absolutely terrible journalism, and from the news editor and editor-in-chief.

Granted, it’s a school paper, so you rather expect second-rate work, and that’s all this complaint alleges. That said, CNN also often gives “news” that can only be generously described as second-rate. In any event, there’s more here than meets the eye. Another comment:

Wow this article is horrible. How much did the administration pay you to write it this way? Biased completely.

Now, just one guy complaining like this doesn’t mean much…you can’t please everyone, after all. There are a dozen comments, however, and all of them are complaining to some extent about the poor journalism here.

Everyone who knows something about this case knows there’s more to it than what the school paper is saying…can we honestly believe nobody at the paper knows they’re just printing administrative propaganda?

Of course not, a little digging will show that the paper has a vice president of Journalistic Integrity and Diversity to make sure the paper doesn’t print any heresy, but I’ve covered the like before so back to today’s issue.

A young man killed himself. This is a horrible tragedy, and even though he ultimately is responsible for his actions, out of respect for his death I feel the need to give a more fair presentation of what happened in this kangaroo court system.