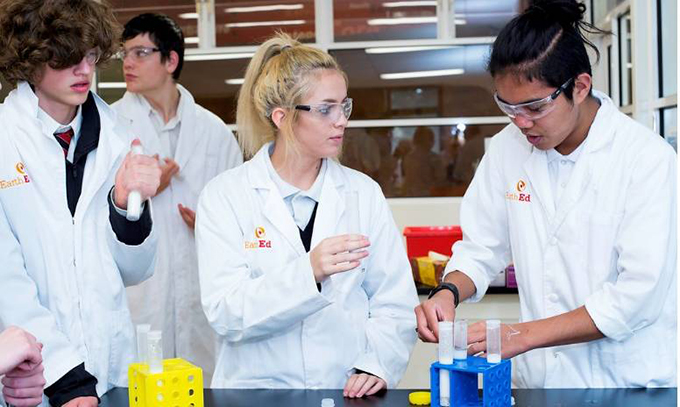 Thousands of Year 10 students are in the process of choosing subjects for their final years of school and half will probably choose to ditch science.

For someone like me who thinks science is one of the most worthwhile things I’ve ever studied, that decision is bewildering.

The downward trend in science enrolments has been watched with concern for decades and is the subject of much research.

But still science continues to be out of favour with teens despite its potential use in a wide range of employment opportunities, beyond the traditional science careers.

Teens live in a world of science

Today’s teenagers have gown up in a world shaped by science. Most don’t know life without the internet and have the world at their fingertips (and parents to help) through computers, smartphones and other connected devices.

Schools are doing what they can to try to teach students the skills they need to prosper in a future that continues to be shaped by science, with increased use of automation, artificial intelligence and so on.

You would think students in this environment would jump at science as a subject that teaches critical thinking and problem solving – just the skills needed in this modern world.

But that’s just not happening.

There are plenty of books written on why students aren’t choosing science and government reports on why we need more science skills, so you might wonder what hasn’t been done.

That’s where my research comes in. I have studied as a scientist, teacher and marketer and I thought the problem might not be science at all, but how students see science compared to the other subjects they can choose. To me it looked like a purchase decision.

I wanted to know how students chose their subjects and how they saw science, so I asked them.

Initially, I spoke to 50 students from five New South Wales schools and then 15 adults (careers advisers and teachers) who helped students make their choices. I went to the information events at these schools and reviewed the subject choice documents given to students.

Next, a group of 379 Year 10 students were surveyed to ask about their subject choices. They were asked to rank 21 factors I found students considered when they chose their subjects. These factors included things such as parent advice, teacher advice, enjoyment of a subject, subject difficulty and the expected mark.

What I found was that the students seemed to use a two-stage process to choose their five to six subjects. The first stage was a choice on “love” or “hate” (they used those words). Then, with any subjects left over, they judged the value of the subject compared to the others available.

This value was in terms of how useful a subject was for a career or further study, and how much effort they would need to put in to get good marks. Unfortunately, this is where things go wrong for science.

Students reported more often (16 against 7) that they saw science as harder than other subjects, and as harder to get marks. Students didn’t say they wanted to avoid work – it just had to be worth it.

Unfortunately, science has a problem here too. Students repeatedly commented that science wasn’t as useful as other subjects – unless you wanted to be a doctor, scientist, engineer or something similar.

I did not see anything at any of the school subject selection events that countered this idea. This makes science look like the bad buy. It’s seen as expensive in terms of time and effort to get marks, and as having limited use.

Yet science is useful in a range of careers, from carpentry to management and many other roles – basically any career that needs answers backed by evidence. Science helps us to understand and participate in the world in which we live.

But this is not clear to students. Their perception of the usefulness of science is very narrow, so there is no longer pressure to include it as a staple next to mathematics and English.

Seeing the value of science

Knowing this gives us something to work with. Along with all the other great work to help students love science, we can work on their perceptions of the value of science at the time they are choosing subjects.

Schools should invite people from a wide range of career backgrounds to come talk to students to share their ideas on how science is useful in their jobs.

We can also do some very practical things to make sure science is at its most attractive when students are choosing subjects – for example, doing fun work in the lab and not scaring them with any challenging exam just before they choose.

These teenagers do not take subject choice lightly – they know they may be closing the doors on some paths. It would be wrong to convince students to take any subject that’s not right for them, but this is about helping them see the value of science.

If they see that value of science subjects through good information and good experiences then they may decide to stay with science, at least for a couple more years.

Author Bio: Tracey-Ann Palmer is a Lecturer, Initial Teacher Education at the University of Technology Sydney