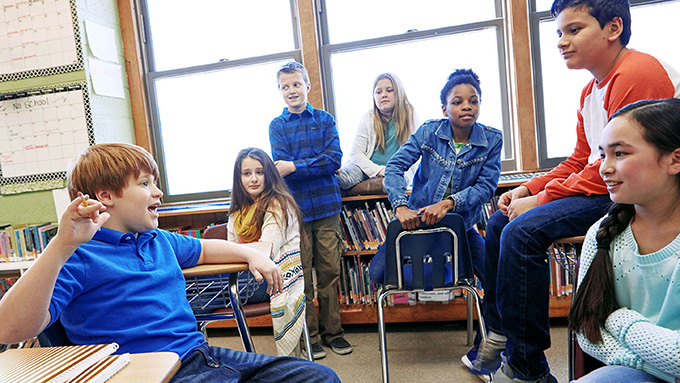 As people moving across territorial borders continues to drive globalization, our society needs to reflect on the linguistic identities of students who are learning English and French, Canada’s two official languages.

Students are generally presented with a language structure (say, the passé composé in French), are encouraged to practise it in the classroom and are ultimately asked to present the language structure in the correct social context — all for a grade.

In these dated language teaching and learning contexts, the everyday ways people communicate — that go against the rules and bounds of language — aren’t taken into account. Research shows that in language learning, when students feel that teachers dismiss their prior linguistic knowledge and experiences, they lose interest, become disconnected and may become set for failure.

The everyday ways people communicate and that we hear in streets, cafés, malls and marketplaces typically do not follow traditional grammar rules (subject, verb, noun, for instance).

Particularly in what have become known as Canada’s “superdiverse cities” like Toronto, Vancouver and Montréal, it’s common to hear people using multiple languages (say English and Greek, or Arabic, French and English) at the same time. Such mixing and switching of language constitute authentic ways of communicating that reflect people’s geographical and cultural backgrounds — their lived histories and their identities.

This means teaching languages only by old fixed rules is not realistic in superdiverse schools across Canada. The lived experiences of students are shown in the mixed and hybrid ways they use language that go against the rules of grammar. In language learning we call this plurilingualism or translanguaging.

Today, we commonly see plurilingualism in people’s social media posts and texts that combine images, emojis and words in multiple languages. For example, in my own experience teaching FSL in inner-city schools in Toronto, grade 7 and 8 students text emojis and truncated words across two or three languages — just to signal where they’ll have lunch.

These plurilingual and multi-platform social exchanges mimic how students communicate with friends and family, outside of school.

If teachers limit students’ identities by limiting the languages students are allowed to use in the classroom, their disengagement could lead to lower marks and marginalization at school. In the global job market, in the long run, disengagement in language learning may also importantly mean a lower payout — because learning the dominant language of a society is a form of social and cultural capital.

This is why plurilingualism has proved to be such rich teaching and learning tool in language learning. Students can use more than one language to communicate a given message at any one time. And they can do it using multiple platforms (pen and paper, online apps, emojis or even role play). Integrating plurilingual language practices in FSL and ESL classrooms engages language learners because they use language they can relate to, language that expresses who they are.

This begins with teacher modelling. Teachers can teach through traditional grammar-based instruction, but they can do so by integrating plurilingual and translingual practices that allow students to draw on their own mother tongues. In this way, students can integrate expressions or words in their preferred languages alongside the target language.

This explicit strategy can then be integrated into more open-ended language tasks that allow students the latitude to draw on personal experience and different ways of communicating that include multilingual language forms and practices.

This can be done through the use of technology and online learning apps. Google Suite, Google Jamboards, Flipgrid and Twitter all allow students to tell personal stories through words, images and body language that cross traditional linguistic and cultural boundaries.

How languages are actually used

Policy-makers need to take into account how language learners actually use languages, and then prescribe the most appropriate way to learn and assess students that takes into account their lived histories, identities and experiences.

Language teacher education and teacher professional development must include anti-bias training that extends beyond equity issues of race, gender, class, religion and ethnicity to address the suppression of other languages in the language learning classroom. In this way, we can ensure teachers understand that affirming students’ linguistic identities is integral to their engagement and to their future success.

Finally, in the classroom this would allow for more democratic ways to assess language competence where teachers and students could co-create assessment criteria that explicitly focus on multilingual ways to communicate.

Educators would then both be able to acknowledge the linguistic diversity of their students while affirming their present identities and equipping them for globally competitive job markets.