“The” classroom “is a place where students are” necessarily forced to silence, to immobility “. Difficult not to be challenged to read this definition, proposed by Ferdinand Buisson in his Dictionary of Pedagogy. It dates from the late nineteenth century, a time that may seem miles away from our world at the forefront of technology. However, it is enough for each teacher to look at the rows of tables and the master table that constitute the ordinary school setting to find that this definition remains relevant.

What do high school students think of these age-old codes? When I invited students of scientific terminale to implement their ideal classroom, in high school Dorian (Paris), it is the exact opposite that has emerged: a room where, far from being simple listeners, they can exchange, interact and move – in a word, live! The chairs and tables lined up in front of the teacher have been reorganized into different blocks, allowing dialogue and group work. Very quickly, the pupils also invested the painting to solve together exercises and to explain points of course.

To support this craze, I allowed them to write with chalk on the walls, before covering the latter with many erasable whiteboards. And so the class has multiple centers of gravity! As a professor, I gave up my position as principal actor against that of stage manager ensuring the smooth running of the collaboration between peers , during sessions generally articulated in three highlights:

By giving the floor to the students, the classroom changes and pedagogy too. Finally, high school students do the class for two reasons . Not only do they participate in the construction of the space in which they live, the classroom. But for some, they also prove to be excellent pedagogues, capable of explaining delicate notions to their comrades.

Moreover, this experience reminds us that we often put aside the problem of the student’s body and its place in the classroom. For the school, the noble part of the pupil is his head, not his body. The body would only carry the head of the house into the classroom, and disappear until it rings. But the student is not just a head! And immobility can lead to a form of disengagement, as Claude Pujade-Renaud has revealed in his book The Body of the Student in the Classroom  : “By sitting like that, you do not feel, we no longer exist, “students told him in the 1970s.

Students in the “mutual class” show that in the traditional “table service” of knowledge, they prefer exchange, peer discussion and cooperation. An educational self-service , if you will, that gives them a taste for learning. As Michel Foucault recalls, there is an intrinsic pleasure in knowledge and it is a tour de force, according to the philosopher, that teaching has “almost as a function to show how much knowledge is unpleasant, sad, gray”  ! School knowledge, in itself, has a flavor but it is the conditions in which it is served to students who can fade it.

The choice of the name “mutual class” is a nod to a time when the student was not necessarily “mouth stitched and ass”, according to the happy formula of Michel Serres . Different models have indeed cohabited throughout history.

Magisterial pedagogy, today dominant in the educational system, finds its roots in simultaneous teaching, theorized in 1680 by a French cleric, Jean-Baptiste de La Salle . The latter founded, in Reims, the Institute of the Brothers of Christian Schools in which a teacher delivers his course together with a large number of students, grouped by age. This is a novelty for the time. This method will help create better teaching conditions and unify school materials, but it requires students to sit in a classroom polarized towards the teacher’s chair. It becomes the norm in France following the Guizot law on primary education of June 28, 1833 .

Yet there was another way of teaching and learning in small schools, the method of mutual teaching. In classes combining ages and levels, the most advanced students in reading, writing or calculating were responsible for sharing their knowledge with others, in front of small wall charts, supporting the master. In a study on the Department of the Somme , Bruno Poucet points out that with this method, “learning to read (but not spelling) was done in three years instead of six”. But arguably more political and religious than pedagogical considerations have finally constrained its expansion. 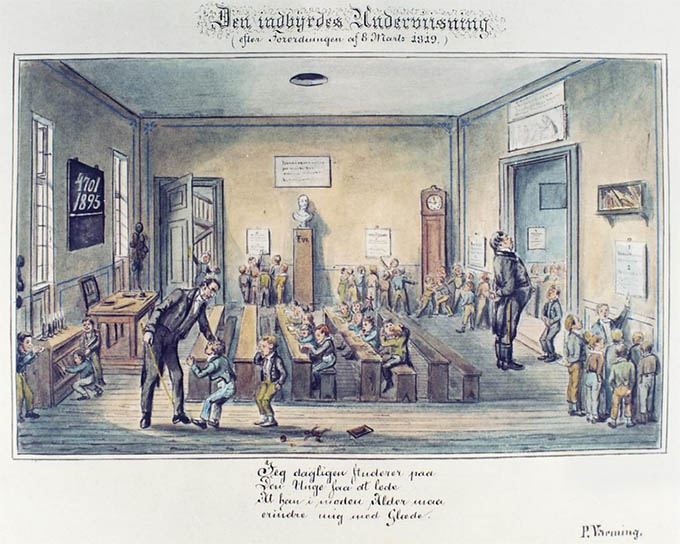 Work in small groups was already at the heart of mutual education popular in the nineteenth century. PC Klæstrup (1820-1882) / Wikimedia

When Dorian High School students gather in front of their white wall charts to explain the peer-to-peer course and exercises, I see it as a distant reminiscence of the spirit of mutual teaching. Times change, the student of XXI th  century lives in a world where digital dematerialized information; the school, once a sacred place for all discoveries, can no longer be content to broadcast what is now accessible everywhere and at any time!

If the question of the presence of digital at school does not arise, the experience of the “mutual class” invites to raise that of its role. Develop new technologies and facilities pedagogy dating from the XIX th  century or even before, is this really relevant? The risk of deploying digital in a static and inappropriate environment is, at best, to underutilize it and, at worst, to make it a “Saint-Sauveur” that should revolutionize the school! It is to lend him virtues he does not have.

The deployment of the digital must accompany a reflection on the spaces and the pedagogy because, if it is inserted in the current school, it will be a factor of isolation. When digital tablets take the place of the slates of yesteryear in a school that is always that of the past , the student finds himself alone with his machine, more than ever motionless and silent. A machine that will eventually scrutinize, analyze and interpret its least school deeds and gestures. This path is undoubtedly promising for adaptive learning but before mobilizing artificial intelligence, should the school not further explore collective intelligence?

The real revolution would then be to consider the classroom as also a place of exchange and socialization – a kind of acculturation of the school to the skills of those who are called digital natives . A place in which the student’s body would be taken into account and where the pleasure of learning would not be another utopia. It is this school topology explored by the “mutual classes” and all those who believe in collective intelligence as one of the levers of the school of tomorrow.