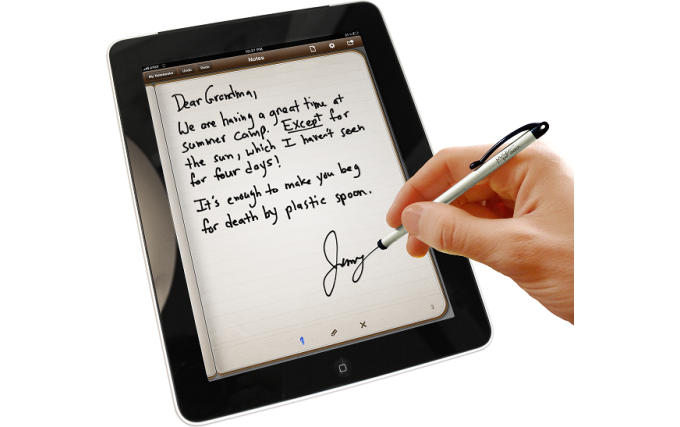 With the spread of digital technologies and the massive use of computers, there is a great temptation to abandon handwriting in favor of the keyboard. However, research conducted in cognitive psychology and cognitive neuroscience shows that handwriting is a cognitive resource and tool , which facilitates learning, unlike the keyboard.

Thus, in kindergarten students, the writing gesture (or graphomotor gesture) which is progressively associated, with practice, with the drawing of the outline of a given letter, becomes an index in memory, just like the shape , the name and the sound of this letter. It improves recognition in reading situations.

This facilitating effect of graphomotricity could not be found to date with the keyboard because it requires only one and the same gesture, whatever the letter – or a simple press of a key.

Likewise, it has been shown that using the keyboard to write texts has a strong impact on the writing performance of pupils, in the fifth or sixth year of their schooling, since they had not benefited from a extensive training in typing. The keyboard places them in a situation of cognitive overload.

If research agrees on the need to keep handwriting, especially at school, this does not mean denying the contributions of digital technologies. The idea is then to use touch pads as a handwriting support. The replacement of the paper-pencil pair by the stylus-tablet pair thus allows the writing gesture to be preserved, while taking advantage of the contributions of a digital environment.

But is it so obvious? Actually no. The problem which arises in the first place is that of a possible disturbing effect on the surface of the tablet. It is particularly smooth compared to paper. Who signed one day with a pen on the back of a bank card has certainly experienced the effect of a very low friction of the writing surface… and it was only a signature here the drawing is almost automatic. What about writing letters and words on such a smooth surface?

Obviously, before going any further in promoting handwriting on tablets at school, it is essential to assess whether, and in what way, the writing of students would be disrupted when ask them to write on the screen of a tablet with a stylus.

To answer this question, we conducted a pioneering experiment in order to assess the effect induced by the low friction of the surface of the tablet on the piloting of the writing gesture in pupils who are still novices (in the second year of primary – 7.5 years) and among pupils who have become more expert in the tracing of letters (in the ninth school year, that is the third class in France – 14.5 years).

To do this, all the students were asked to recall their first names and the letters of the alphabet by writing with a ballpoint pen on paper, and with a plastic pen on the screen of a tablet. . Two additional analyzes were carried out to assess performance according to the two writing conditions.

The first analysis consisted in evaluating the graphic quality of the letters in terms of conformity with their academic forms. The second analysis consisted in extracting, from the information transmitted by the tablet, indicators of the dynamics of the graphomotor gesture, such as: the pressure exerted on the pen / stylus during the writing of a letter, the duration of production of the letters , the length of writing breaks, the length of the stroke, or the speed of movement of the pen.

The results of this study show that tracing letters on the tablet with a stylus leads to a deterioration in the quality of the letters of the first name – which is however a series of letters whose writing is well assimilated by the students – and an increase in the size of the letters, whatever the level of education.

On the other hand, writing on a tablet with a stylus leads the second year pupils to take longer breaks during the drawing, and the ninth year pupils to write larger letters more quickly, by exerting greater pressure on the stylus.

These results indicate that by writing on the smooth surface of a tablet, second-year students find it difficult to program (calculate) the different segments making up the outline of the letter.

The ninth grade students, more advanced in terms of graphomotricity, encounter difficulties not in programming the segments but in regulating the trajectory of the stylus. This forces them to increase the size of the letters and the pressure exerted on the lead, to better feel the force exerted by the pen on the fingers (in other words, to maximize what is called proprio-kinesthetic feedback) and maintain adequate steering. despite the low friction.

These first results, alerting to the possible negative effects of an exclusive use of the stylus-tablet pair for writing at school, have been confirmed by two other studies which show that these disturbances in gesture control are also present in pupils of kindergarten (5.5 years), second year (7.7 years) as in adults (21.8 years), even if they are more or less marked depending on the nature of the writing task.

If there is thus no doubt that the low friction of a tablet disturbs the piloting of the writing gesture by modifying the perception of his pen by the writer, it is then possible to question the possible use of the visual analysis to adapt the steering of the gesture and still succeed in forming letters, even if they are degraded.

Indeed, in addition to the use of proprio-kinesthetic feedback (i.e. the feeling of the pencil in the fingers), the writer can also use vision to guide the trajectory of the tip of the pencil. This mode of visual piloting, using what is called retroactive visual feedback (where the eye pilots the pencil), is the fact of the youngest scripters who, still little experienced, trace the letter little by little. They adjust the trajectory of their line based on the visual analysis of the line.

To assess the extent to which writing on a tablet would force a writer, even an expert, to return to a visual piloting mode, we proposed to students in the second year (7.8 years), fifth year (11.1 years) and adults (25.4 years) to write letters and words with a stylus, on a tablet whose surface was smooth or roughened by adding a plastic film on the screen. In some cases, a removable cover preventing you from seeing what the hand was writing, in others, not.

This result indicates that the pupils, in a usual vision situation, compensate for the effect of the low friction of the surface of the tablet by mobilizing more strongly the vision to control the drawing of the pencil, a strategy characteristic of beginner scriptwriters.

These different studies, with convergent and complementary results, indicate that to date the tablet-stylus couple cannot be a transparent substitute for the paper-pencil couple, whatever the level of the students.

In view of the results, it appears necessary for the screens of the tablets to be modified as to their structure so as to increase their degree of friction, in other words, to make them less smooth, so that it becomes as easy and obvious to write on it only on a sheet of paper.

The simple fact of positioning a rougher plastic film on the screen of the tablet proves to be a simple technical solution which makes the tablets more conducive to writing. In the current state, the need to adapt the steering of his gesture – in particular by requiring the young writer to resort more strongly to the visual analysis of his track – poses the question of a possible impact on the performances at spelling or writing tasks.

Indeed, these tasks also require processing of potentially competing visual information. Additional studies should be carried out to explore these aspects as well as study the training effects which could minimize the difficulties associated with writing on a tablet.