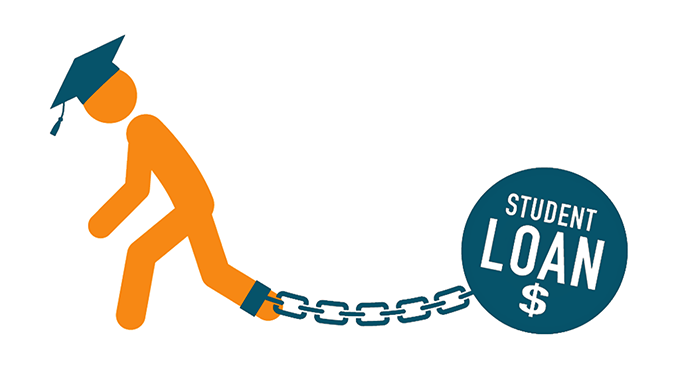 Government stupidity clearly knows no bounds. We have tens of millions of people now with student loan debt, a debt which is often too large to pay back thanks to government interference, and cannot be cleared via bankruptcy. But the government wants “its” money, and gets to create the laws. We’re already seeing students loans now go beyond death (again, stupid…), but that’s just not enough:

In times past, there were debtor’s prisons, but we abandoned those because we realized that a debtor has even less chance of paying back his loans when in prison, and having The State take care of the debtor only added insult to injury.

Today we have too-large loans so students can get an education, or in this case a job license, which leads to a job which doesn’t pay enough to cover the interest on the loan.

And the government response to this idiocy is to take away the license so the victim will be even less likely to get a job which can help pay off the loan. As I so often say when looking at our student loan system, I can’t make this stuff up.

I know, a hundred people is a piffling number, but it was only a few years ago that less than a hundred senior citizens were having their social security checks claimed to pay off student loans…and today it’s tens of thousands. It isn’t that hard to see these problems coming from years away, and with well over 45,000,000 people with student loan debt today, we can expect this issue to get much, much, worse in the coming years.

The move to suspend health care licenses comes after federal student loan companies spent years lobbying states to adopt laws to punish those who default on student loans by taking away their professional licenses.

But an ABC Action News review found Florida is the only state enforcing those laws.

The gentle reader should note carefully: the laws allowing this are already on the books, it’s only Florida enforcing the laws. As more and more states become strapped for cash thanks to our failing government pension system, you can expect other states to “suddenly” start enforcing these laws as well.

None of this stuff needs to be a surprise to anyone, honest. If you have a student loan, and a job license, note carefully those other states and see if you can move out of them. Of course, nothing can prevent more states from enacting these laws.

…state’s Board of Health estimates it suspended between 90 and 120 health care licenses – including professional certifications for registered nurses, Certified Nursing Assistants, pharmacists and opticians

These are real jobs, by the way, we’re not talking putting baristas out of work here.

One of the real benefits of our system of government is each state can operate independently (subject to basic rights), and so people worried about this problem could just move to another state. Granted, our citizens keep voting to give themselves less and less independence…imagine how devastating it would be if there were a Federal law allowing licenses to be seized for student debts? There’d be no escape at all.

It’d be almost as devastating as if there were a Federal system of student loans, guaranteeing any school massive amounts of loot no matter what state the school was in. Oh, wait…

“It’s trying to take too much away,” Picone said. “This person may end up on Medicaid, receive food stamps. All this is more money that we will have to pay.”

Yeah, no kidding. The fact that health care workers are being targeted for removal of those oh-so-expensive licenses sure doesn’t help either, as it inevitably will drive up health care costs.

And under Florida law, once the state suspends a license for student loan default, the only way to get it back is to pay a fine equal to 10 percent of the balance, plus state investigation costs.

Yes, yes it can get more stupid. They take away the victim’s source of money, and if the victim wants it back, he has to pay a lump sum of…money.

The U.S. Department of Education estimates more than 10 percent of student loan borrowers are in default.

Yeah, “more than 10 percent” is one way to put it, though a more realistic estimate is past 30 percent. There is a wide range of “programs” to hide the defaults, either by having the victim go back to school (say, for 1 class a semester for the next decade), or devastating “income based repayment” plans which inevitably put the victim even deeper in debt, even as, technically, there is no default. There’s a reason why Millenials expect to die in debt, after all.

I’m quoting a fairly recent article, but once again the numbers are off. A more realistic estimate of total student debt is $1.5 trillion, not that it much matters at either level, as we know much of this won’t be repaid, any more than the national debt ever will be. The best these victims can hope for is to pay interest for the rest of their lives even as their debts rise and rise, much as this is the best the taxpayer can hope for.

Granted, the Federal government can just keep printing money, so I guess it’ll never default in the most literal sense. It’s a shame there’s no law to take away their printing presses, but not a surprise since the government would have to pass such a law. It’s a double shame that victims of the student debt scam can find themselves not only deep in debt, but unable to get a decent job to pay off that debt.

Of course, we could just end the student loan scam so that future generations won’t be destroyed…