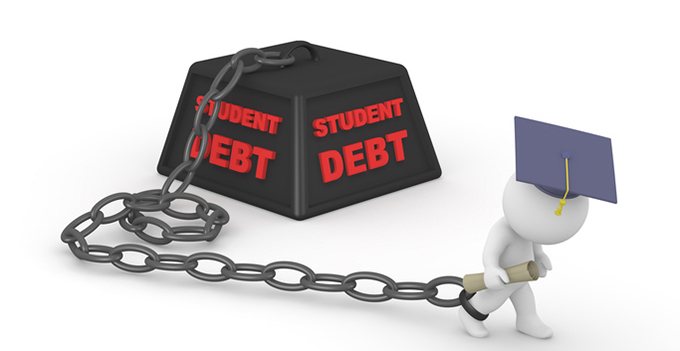 It’s no secret I’m against the student loan scam, but I’ve been fairly alone in identifying one of the two core problems with our higher education system (the other is corrupted accreditation). Don’t get me wrong, the Leftist takeover, student-as-customer paradigm, adjunctification, bureaucratization, boiler-room classes, and quite a few other problems are all issues…but these all only exist because of the two core problems.

Our course, our “mainstream” media doesn’t seem to see any problems here, and anyone who questions the narrative of “all is well (outside of the evil orange man)” is branded as “alt right” or a Nazi, or sexistracisthomophobe. A recent site I’ve heard called “alt right” actually dares to say what I’ve been saying for years:

An Idea for Student Loans: Get Rid of Them

Just as my plan is simple (shut it down immediately), the National Review likewise sees things as straightforward, keeping it to three steps, though I’ll clarify:

Step 1: The federal government should stop making college loans itself and cease guaranteeing any such loans.

Step 2: It should prohibit educational lending by federally regulated financial institutions or, if that seems too heavy-handed, require the application of ordinary credit standards in any private educational lending, treating the student himself as the main credit risk in all cases, including those of secured or unsecured loans taken out by parents or other third parties for that student’s educational expenses.

This does seem a bit heavy-handed and needlessly complicated. Without Federal enforcement of recovery, banks would be on the hook for loans going into default…they’ll be applying credit standards in any event. I suspect the banks will figure out very quickly that it’s a bad idea to grant loans for bogus educations.

And 3: It should make student-loan debt dischargeable in ordinary bankruptcy procedures.

Federal enforcement of recovery is a factor in why bankruptcy doesn’t get rid of these debts. As much as I hate retro-active changing of agreements, I think we need to do the above, insofar as the judge in the procedure will have the opportunity to see that the loan was made on false pretenses of a legitimate education being provided. Seeing as most loans were fraudulently made, we should open this possibility, even if looking at it on a case-by-case basis would be problematic. We have around fifty million people with student loan debt, so that’s many cases…maybe a blanket repudiation would be better, simply as a matter of efficiency.

It is time to shut down the Bank of Uncle Stupid.

The National Review thinks the government is “stupid” for making these loans, and I certainly see their point. I do feel the need to point out our government may be “stupid like a fox,” if the gentle reader can forgive the mangling of the cliché.

Our higher education administrative caste rakes in huge amounts of money from the student loan scam, and many of those administrators are drawn from our political caste…the same set of politicians profiting so greatly from the student loan scam are the same ones who keep the scam going. Our government may be stupid, but the people setting up the “stupid” system are doing great by it. It’s why there’s no political momentum to stop a system ruining the lives of tens of millions of our citizens supposedly being represented by our government.

A senior official of my alma mater, the University of Texas, once caused a stir by confessing — in public — that UT Austin doesn’t need to charge tuition at all but does so mainly as a population-control mechanism. The problem, he said, wasn’t money as such but the fact that the state would not let him raise admissions standards.

It’s really worth pointing out most everyone in the state school system, looks at the taxpayer support, looks at the old buildings long since paid for, looks at all the tax breaks…and realizes we’re grotesquely overcharging the students. Most state schools (particularly the ones using minimally paid adjuncts) can address their overhead–actual expenses, not counting plundering fiefdoms and million-a-year Poo-Bahs–for a class with what 2 or 3 students are paying for it. Private schools run around 5 students a class before they turn a profit in terms of direct costs (fewer for pure online).

And yet we commonly have classes with a hundred or more students. The profit margins are huge here…and yet tuition keeps rising, as does the number of Vice Presidents of Excellence in campus fiefdoms no student or faculty will ever see.

If you make a few gazillion dollars available to finance tuition payments with underwriting standards a little bit lower than those of the average pawn shop, you create a lot of potential tuition inflation. Another way of saying this is that if Uncle Stupid puts a trillion bucks on the table, there are enough smart people at Harvard to figure out a way to pick it up.

–NR is wrong here, the underwriting standards are much, much, lower than a pawn shop’s, as no collateral whatsoever need exist.

The National Review advances a “theory” about the rising tuition, namely the idea of inflation. They mean inflation in the economics sense, instead of how most people view it, as rising prices. Economic inflation refers to an increase in the money supply. The National Review is certainly correct that rising tuition is due to the huge increase in the supply of money for tuition, provided by the student loan scam.

Good for them, for getting this right in an article I’m quoting from April of 2019. Thing is, Libertarians have been explaining this concept for decades now, and I encourage the highly motivated reader to read the works of the great Ludwig Von Mises to get a grasp of economic theories that actually work for humans, instead of Keynesian theories which really only work for governments and people connected to the same.

So, let’s cut the Gordian knot here. Don’t reform student lending, don’t try to lower the interest rates or create special debt subsidies for college graduates who follow careers of which the people with political power approve. Just get rid of it. With a meat ax.

Ultimately, the plan is simple. It’s a shame only “Nazis” can see what needs to be done here, but the source of the idea is irrelevant next to the validity of the idea. The author of the piece I’m quoting from doesn’t understand the reasons why this simple idea has not been executed long since, and he doesn’t understand how universities of today work, either:

There are lots of smart people at the universities. Or so we’re told. If they can’t figure out how to teach the liberal arts or accounting without dipping into the Bank of Uncle Stupid with both hands and all available snouts, then maybe somebody else should give it a try.

Oh, there are smart people at the universities, and they’re teaching liberal arts, accounting, and quite a few other subjects. The teachers, the faculty, aren’t the ones dipping into the Bank of Uncle Sam, it’s the ”leaders” running the universities. Those “leaders” are also the ones, to a great extent, responsible for making Uncle Sam so willing to write the student loan checks, alas. While you can certainly point the finger at the faculty for turning over the reins of power to the plunderers who run the system now, that happened long ago, and the finger-pointing is likewise irrelevant compared to what needs to be done now: End. The. Student. Loan. Scam.