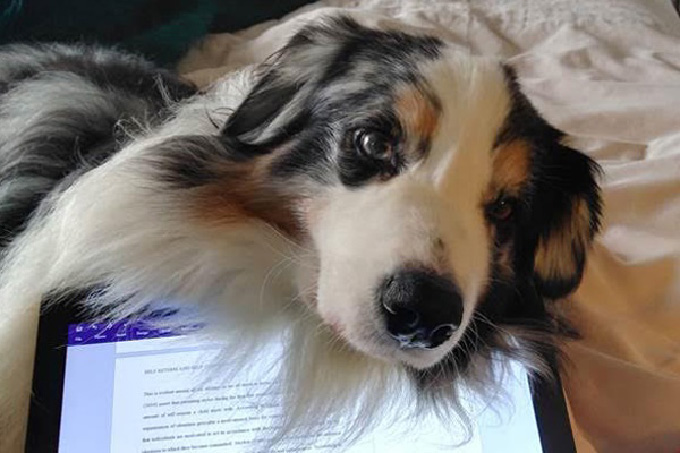 Academics and writers have known about the therapeutic benefits of animals for many years. Mark Twain was regularly photographed with several cats draped over him, and a personal favourite image is of E.B. White sitting at his typewriter while his dog Minnie looks on.

Contemporary academics and PhD students have adapted the trend for the modern age by posting pictures of their pets on social media with hashtags such as #academicswithcats #academicswithdogs #phdcats and #phddogs. The posting academic is usually suffering from feelings of isolation and writer’s block, and has momentarily found joy in the distracting antics of their pet. The accompanying image is generally their pet promisingly obstructing chapter drafts or sleeping on a stack of research texts.

The animals in these posts are often referred to as ‘research assistants’ or ‘supervisors’. Obstructive behaviours are endearingly rebranded as ‘help’. These images are a tribute to the non-judgmental companionship of animals during thesis candidature, a time often characterized by isolation and uncertainty.

In ‘Harry Potter’, and its less famous predecessor ‘The Worst Witch’, students are encouraged to bring an animal with them to boarding school as both companions and for more functional purposes such as delivering notes. In ‘The Worst Witch’ cats are book-listed and handed out to all new students on arrival. I sometimes feel that post-graduate students should be similarly equipped on enrolment, as frequent animal interactive can have a hugely positive impact on mental health.

It is imperative to point out to pet-less academic writers that a thesis therapy animal doesn’t have to be your own. I spent the first few months of my candidature happily writing my literature review on the back-porch couch with our neighbour’s cat. Dubbed ‘Puddings’ by my partner, my ill-gained cat liked the fact that I was always home and would make a big fuss of him during periods of extreme procrastination. When his owners moved house and took Puddings with them, I was devastated and instantly contracted writers block. This was somewhat alleviated when Sam the cat came to live with us. He immediately took over Puddings’ duties and I went on with the business of trying to write a PhD.

The value of a therapy animal to the hapless and overstressed graduate student is manifold. Firstly, writing up several years of research into a thesis is a solitary activity. Sharing a toilet-sized office with two other chatty PhD students can provide a feeling of solidarity, but in reality, if you’re also working two jobs and live an hour’s commute from Uni, you’ll probably elect to work from home. Animals provide the type of company that doesn’t prevent you from nailing that really tricky chapter. It’s also highly unlikely that they will do better than you in their confirmation hearing and boast about it for the next three months.

If you’re anything like me, your best (V energy drink fueled) thesis writing time is between midnight and 4am, after which you will fall asleep on the couch, Fox Mulder style. There are very few other members of your household who will be interested in keeping you company at such an antisocial hour. Here, your thesis therapy animal can be relied upon to sit either under or upon your desk, giving your arm the occasional encouraging lick. This experience can also be simulated by stalking other people’s pets on social media.

I once happened past a PhD student office with a sign on the door that said: ‘we like our door closed and our music LOUD’. As promised, extremely clamorous heavy metal music was emanating from the insufficiently sound-proofed door. Many students find they work better while listening to music, but I find it too distracting. Pets provide a delightful alternative white noise in the form of purring, breathing, cheeping, squeaking, chewing, yawning or snoring (my cat had sinus problems). It provides enough background noise to fill in the chasm of silence, without distracting from you from serious quasi thesis-related internet procrastination (have you SEEN the PhD Comics website?)

Animals provide warmth. Not just the sense of unconditional love that comes from pet ownership, but an increase in body temperature. My first three years of candidature were spent in a weatherboard house with no insulation. It was often colder inside than outside, and Sam proved to be an outstanding lap cat. By the same token, cats are drawn to the heat of laptop computers. If you have a heat-seeking cat, back up your work regularly. You have been warned.

PhD students are often urged to practice ‘self-care’, a movement that endorses exercise, mindfulness, healthy eating, a balance between work and leisure. But personally, I believe that there is nothing so meditative as watching a cat clean its paws on a sunny window ledge.

Author Bio: Dr Jo Clyne completed her PhD in History and Theatre Studies in 2015 at the University of Melbourne.