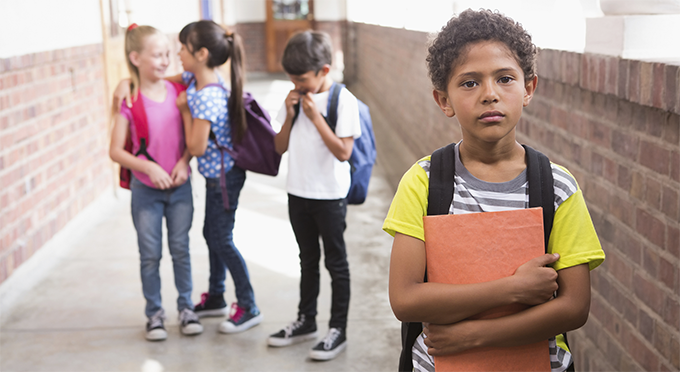 Talking about portraits of victim and stalker in the phenomenon of bullying can be confusing and lead to the mistaken idea that in childhood there are children who have characteristics that will make them stalkers of others and that, in turn, there are other children destined to be victims.

This image contrasts with what we know of school bullying. It is a phenomenon that occurs when a behavioral and relational pattern is established in the aggressor. He finds it effective in gaining popularity or superior status among his peer group, and for this reason he maintains it. Therefore, we could say that aggressors learn and maintain this type of behavior because it works among their group to achieve their objectives.

On the other hand, victims are companions who sometimes have some distinctive feature related to their appearance, attitude or academic functioning that catches the attention of the aggressor and often lack the skills to face him and get out of the harassment. So dynamic is this phenomenon, that in many cases the victims adopt the role of stalker repeating a lived behavioral pattern.

From psychology we try to find answers that help us understand the causes that cause some children to be involved in this phenomenon and others not. We find them in what we call risk factors . These refer to certain aspects that make some minors more vulnerable to being involved in bullying, either as victims or as stalkers.

The risk factors of bullying can be of a family, socio-cultural and emotional or affective nature. The most interesting from the point of view of psychology and education, for the possibility of intervention that they provide, are those related to the emotional intelligence of victims and aggressors.

The role of emotional intelligence

Currently, we know that there are differences in the different dimensions of emotional intelligence among victims, aggressors and minors not involved in the phenomenon of bullying.

In the case of the victims , we know that those minors with problems of self-esteem, with low mood or few social skills are more likely than the rest to be subject to harassment by other partners. To this is added that any differentiating feature, be it physical, behavioral or aptitude makes them more vulnerable to this phenomenon.

On the other hand, aggressor boys and girls, in general, have lower levels of emotional intelligence. In particular, we can say that they have little tolerance for frustration, are not willing to follow the rules and tend to have serious lack of empathy and little capacity for emotional self-regulation.

In this sense, empathy is one of the risk factors that increasingly takes center stage in the phenomenon of bullying. Empathy or the ability to identify the moods of others and act consistently appears naturally after three years of life in most children, but needs an important experiential and educational component to develop from optimal way.

The absence of empathic models or effective emotional guidance can lead many children to be unable to identify and understand the pain of others, and therefore actively engage in violent acts against their peers if this brings benefits.

As we have described, although there is no fixed and hieratic portrait that describes the characteristics of the minors involved in school bullying, we do have a clear idea of ​​what emotional and social skills can protect them from it and what will facilitate that in a propitious environment develop relationship patterns based on physical or verbal aggression and the persecution and harassment of a partner in order to reinforce their image and status within their peer group. This, in short, leads us to one of the most important aspects in bullying, which is prevention.

We know the risk factors and how to modify them through emotional education that encourages the development of empathy, emotional self-regulation and other emotional competencies. Beyond being a problem of an educational nature, bullying nowadays is a public health and safety challenge.

It is one of the biggest causes of emotional disturbances in childhood. Stalking victims experience disorders anxious, depressed and even phobias, and aggressors have up to 60% more likely to commit violent or criminal acts in youth than the rest of his teammates did not stalkers.

The knowledge and study of these risk factors in the phenomenon of school bullying illuminates the path of prevention, guiding us on what aspects we should influence to develop effective preventive programs.

Recent studies indicate that the effectiveness of these programs not only lies in the duration or intensity of them, but also in including aspects such as emotional education.

In this line there are already programs aimed at preventing bullying focused on improving the emotional skills of school children.

These could not only reduce the number of cases of bullying in schools, but also contribute to build a more tolerant, conciliatory and supportive future society.