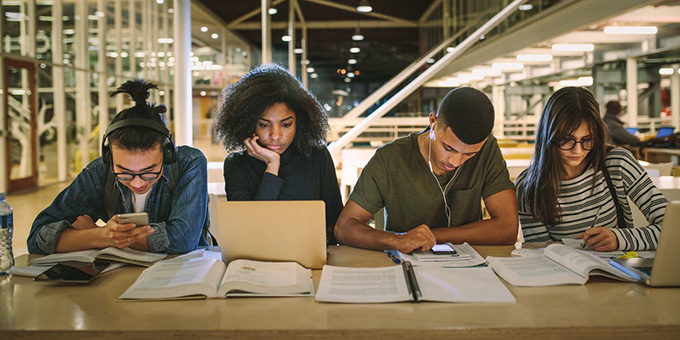 Since January 22, high school students who want to continue their studies in higher education can register their wishes on the Parcoursup site . Bringing together the majority of post-baccalaureate training, this platform succeeded the Post-Bac Admission system, known as APB, which was subject to multiple criticisms – certain high-voltage fields had decided between candidates by lot in 2017. With Parcoursup, this appeal is no longer possible.

Above all, high school students no longer need to classify the ten choices that they can formulate at first, as was done on APB, with the risks of self-censorship and the complex calculations that this entails. And Parcoursup intends to reinforce the support of teachers with young people during the orientation procedure. The fact remains that the range of possible combinations is vast. From theory to the field, how did young people experience this new system?

Based on an unprecedented survey on the transition from secondary to higher education, the National Observatory of Student Life ( OVE ) questioned the representations and experience of the first generation to have known Parcoursup. If this survey does not allow to understand the reasons for the discouragement of certain students, it nevertheless makes it possible to identify the strategies of those who have integrated higher education, and to apprehend the social inequalities which remain in the construction of guidance projects. .

Does luck smile on the daring?

Most of the students used the option offered to them to make several wishes, or even filled the entire list – this is the case for one in five students. What choices are hidden behind these wishes?

These two strategies are predominant when entering vows, since each of them was implemented by more than 70% of students and 55% adopted both at the same time. However, the profiles of the daring differ from those of the cautious. Paradoxically, it is the “good pupils”, with the most favored profiles, who have played the card of caution – by also issuing more choices than their comrades -, even if their place in higher education is more assured.

Conversely, more vocational graduates and high school students of popular origin have played the card of daring. This undoubtedly testifies less to a risk appetite than to the internalization, by these students, of their lower chances of access and success in higher education. All the choices seem risky to them.

The outcome of this last strategy is rather disappointing: if more than 50% of students say they have been admitted on the most desired choice, 55% of “cautious” only declared having had their first choice, whereas it is the case for 49% of the only “daring”.

The entering of vows is only the culmination of an orientation process which begins well in advance, in the family and in secondary establishments. The law on guidance and student success ( ORE law ), which is behind the establishment of Parcoursup, aims to strengthen the institutional support for career choices.

This law gives more weight, especially to teachers, who are encouraged to set up personalized interviews with high school students. De facto, 55% of students declare having had at least one individual interview with their main teachers in the survey.

If the Internet appears to be the primary source of information mobilized by students, the family remains in high demand throughout the selection process. Nearly a quarter of the students cited their parents or siblings among their first three sources of information to decide their orientation.

47% of the students were with a family member when the vows were entered and more than 70% of the students declared having been helped by relatives – for the writing of the motivated training project, the clarification of choice of orientation or help with writing the CV in particular.

The family is particularly solicited by the most advantaged students, who are also those who have used institutional resources the most, by declaring more frequently that they went to university before their choice. They were also the ones who found the procedure less stressful and simpler.

The weight of the original high school

What matters most, a posteriori , in the eyes of the students, to obtain a satisfactory proposal? Academic results and teacher ratings are the two most important criteria, cited by 70% and 45% of students, respectively. Then come, in descending order of quote:

In general, the more students obtain the desired wishes, the more they are satisfied with the procedure and judge it to be fair. When they have been admitted with all their wishes, 51% are satisfied with the procedure and 34% consider it right. They are only 13% and 7% respectively to adopt this position when they have obtained only one of their wishes and it was not one of the three most desired.

Similarly, according to the criteria perceived as important, the Parcoursup procedure will not be judged in the same way by students. Thus, students who cited academic results as one of the important criteria for obtaining a satisfactory proposal are more convinced of the fairness of the procedure (30% compared to 19% among students who met other criteria). Students who cited the original school are less convinced of the justice of the verdict (17% consider it fair compared to 28% among students who did not cite this criterion).

This survey focused on the first version of the platform set up in 2018. We will now have to see if the changes made to the Parcoursup procedure from its second year of commissioning have changed the situation.