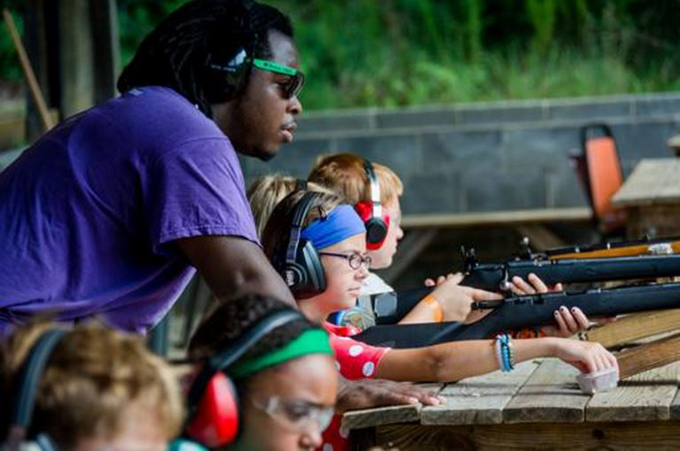 I try to focus on higher education, but the interconnectedness of the modern world (more accurately, government involvement in everything) means that I often have to look beyond the ivory tower to gain a better understanding of what’s going on inside the tower.

Our public education system is pretty bonkers about guns now. It’s weird how in my father’s day, shooting clubs were common at high schools, and even when I was a kid it was no big deal put a .22 rifle in my hand and let me take shots at targets, along with a bunch of other kids, down at the Boy’s Club a block away from school.

Now when a kid even mentions the word “gun” at a public school, the place goes nuts, and the adults swarm like ants to do everything but figure what the problem really is.

At a high school, there was a “new” math symbol up on the board, and the kids were puzzled by it: 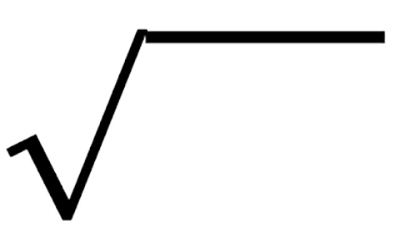 Some kid says it looks like a gun, and hysteria ensues:

Students in Louisiana thought this math symbol looked like a gun. Police were called

To judge by the recent event in Florida, the police here acted according to policy: upon being told about a possible gun on campus, they first waited until there was no actual shooting going on, and then sprang into action.

After several students made comments along those lines, another student said something the sheriff’s office said could have sounded like a threat out of context.

Police searched the student’s home, where they found no guns or any evidence that he had any access to guns. Authorities also wrote there was no evidence the student had any intent to commit harm.

Now, I don’t begrudge the police’s actions here, they’re just following orders, and we all know once you put humans in government uniforms, about all you can expect of them is to follow orders. So, the merest mention of a gun involves a full investigation, because that’s our “solution” which will keep kids from being killed by guns on campus (simply shutting down the schools forever seems a better solution, and if we must have the schools, allowing teachers to protect themselves and the kids if they so desire strikes me as a common-sense option…I just don’t understand how bump stocks are relevant at all, but I digress).

But the gun hysteria detracts from the real issue here, because the fact that these high school students were puzzling over this symbol is very revealing of what’s happened to our public school system.

The symbol in question is called the “radical” or “square root” symbol, and denotes the positive number which, when squared (i.e., multiplied by itself), will be the number under the symbol. For example, a 9 under this symbol, read “the square root of 9,” is 3, because 3 squared is 9.

The use of this symbol is something of a big deal, because many numbers, though they should be easy to calculate, cannot be easily represented. The classical example of this is in a right triangle, where each leg has length 1. The Pythagorean theorem says the square of the hypotenuse is the sum of the squares of the legs.

Question in an advanced college math class this semester: “What’s a rational number?”

–the concept of “rational number” used to be taught in high school…but it was removed.

By the Pythagorean theorem, then, the square of the hypotenuse is 2. And so the hypotenuse length is that number, which when squared is 2. So, what is this number? This was a problem for ancient mathematics, which honestly believed this number could be easily calculated, or possibly represented as a rational number (i.e., a ratio of integers, which usually looks like a fraction).

–the most common answer on the last pop quiz I gave (multiple students wrote exactly the above), in a 2000 level statistics course. The question was “What is the probability of rolling a 6 four times in a row on a typical 6-sided die?” Yes, I did define the concept of independence, and worked out a few examples as well, before asking the question. Fractions used to be taught in 8th grade or so, but almost all calculations involving fractions are removed in the grades afterwards, because so many students fail to learn how to use fractions that they would simply continue to fail all future courses otherwise.

Student: Wait. How did you know 2 was a root?

Student: How do you know what to guess?

–the guessing technique I used is called the “Rational Root Theorem.” It used to be taught in high school algebra, but was removed…

The square root symbol used to be taught around the 8th grade (I cover the symbol in remedial math courses, which approximate the material that’s supposed to be taught in that grade, so I have some idea what’s taught in 3rd through 9th grade, because that’s “college material” in many campuses).

Today we can have a group of high school students standing around the board staring at this symbol, a symbol that they should have learned years earlier, and puzzling over what it can mean. And THIS is the real issue behind the story.
When the curriculum for our government education system was set down, scholars were asked what kids should know, and when they should know it…and everything was laid down. That was many years ago.

Since that point in time, scholars have been removed from education, to be replaced by people with no education themselves, and no appreciation of scholarly thought. Now, I’m not saying everything was laid down perfectly, but what is definitely happening today is more and more of those original foundations are being chipped away, to the point that we’re seeing real problems, huge gaps in knowledge in students who supposedly have been studying concepts for years.

The prosecution in the Zimmerman trial suffered a major blow when a key witness, a high school senior, showed she was unable to read cursive. Reading cursive used to be a skill taught in the 3rd grade,…

–it isn’t just in math where students just don’t have skills which used to be very common.

Because of these huge lapses in education in our public school system, our students which move on to college, even quite good students, are finding themselves hitting brick walls which shouldn’t be there…because our college courses are based on the education system we were told was being used in the public schools: a solid system, and not one filled with holes.
Now, some colleges are responding to this big problem with social promotion. This is cruel and evil, as it destroys the value of a college education while still extracting a huge sum of money from the student, who eventually gets a worthless piece of paper.

It isn’t just that these huge holes ripped into education are causing our college students to fail, of course, as we now have students so ignorant that a “weird” math symbol can literally cause the police to search a kid’s home…