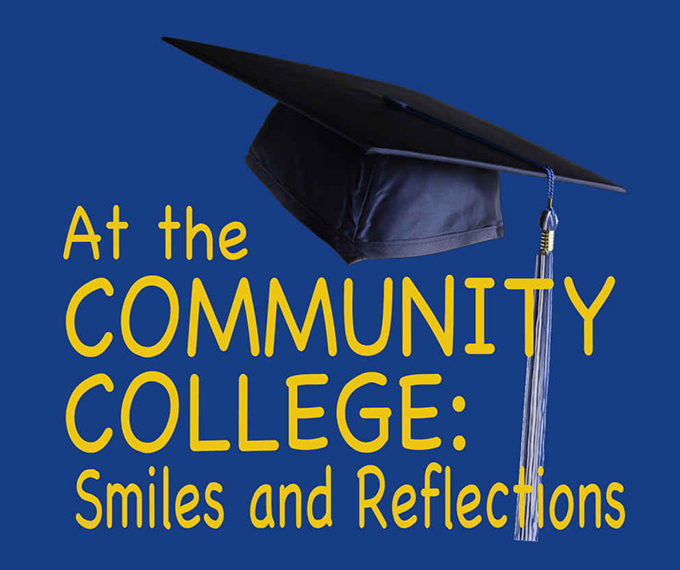 A while back I reviewed The Philip Dolly Affair, a work of fiction that nevertheless pulled back the curtain on the brutal reality of community college. I recently received a copy of a sequel of sorts…At The Community College: Smiles And Reflection. it’s not as good as ‘Dolly, but it still brings back a few bone-chilling memories of the most fraudulent part of the American higher education system.

This isn’t so much a book as a series of very short stories and anecdotes, or personal reflections of faculty on campus. A few highlights:

She was amazed at how much energy the faculty at Copperfield spent on meetings–daily meetings about quality initiatives, constituency labor concerns, salary negotiations, golf tournaments, strategic planning, organizational, learning, wellness exams, potlucks, and even baby showers. Kat reckoned she spent sixty percent of her on campus time at college restructuring and reorganization meetings. “

Going to graduate school at a university, I never really saw, much less interacted with, the immense bureaucracy at a community college (CC), and so was overwhelmed when I finally saw it. The bureaucracy is much heavier, relatively speaking, at a CC, and they’re all eager to justify their jobs…typically through mandatory meetings. Oh so many meetings, on topics of no interest or value to an educator, but immensely fascinating to admin.

President and Dean…Pleasant enough men, they talked incessantly, but in actuality did so little, she thought to herself. She often marveled at the proliferation of dean and vice president positions the last few months…

The above is so consistent with what my own eyeballs always showed me…they had nothing to so say. I saw a CC go from a 3:1 faculty/admin ratio to under 1:1 (the national average) once it became accredited and the government money started flowing it.

…pleased to learn she had won a BISON (Big Institute for Staff and Organized Normalization) award for teaching excellence, but her joy was tempered somewhat when she learned seventeen other CCC faculty members also received their BISON plaques…

Wow, I’d forgotten about all those awards ceremonies, more mandatory meetings where you typically watch admin congratulate each other on their perceived incredible skill at getting ignorant kids to come to campus and receive checks. And yeah, sometimes faculty got some empty awards too (I have a few in a box somewhere…).

The biggest, dirtiest secret in higher ed isn’t the proliferation of administrative positions, it’s the annihilation of faculty positions by exchanging them for “part time,” “temporary” adjunct positions. Most college professors are adjuncts now. This was bad 20 years ago, but these are no-retirement, no-health-care, no=benefits at all positions, and that’s a bad job to hold for much of a life.

take on several part-time sections at the college–at the decision-point of his initial “hiring” at SSTCC, a since long-departed Dean (who is now a successful community college President somewhere in Eastern Wales) assured him he would have a good chance at becoming a full-timer in just a year or two. (That was in 1995. Twenty-four years have passed.)

Together, if they both teach four classes during the semester, they take in about 15,000 dollars per annum.

He had no health or dental insurance and had not been “in” for a physical for decades. (And one of his back molars was screaming for extraction!)

At one Adjunct Action Meeting, a frustrated biology professor shouted out, “Fight for $15? Hah! I’d be happy to get $5 an hour! I can barely afford to drive out here to teach–and I sure can’t afford to buy a #$%$#@@ Moonbucks cup of coffee. #PiratesforPay! #PiratesforPay! #PiratesforPay!” They had no health insurance, campus offices, or recognition. Now, they would force the administration to meet their demands–or else. They could only teach nine credit hours a semester, according to strict benefit thresholds for part-time employee guidelines, so an adjunct teaching six classes (eighteen credits) during the school year would earn $11,700. Compare this to the thirty-seven assistant and associate deans and VPs each making over $175,000 a year!

Really, what’s being done to our educated citizens is criminal…or would be, except CCs are state run institutions, and the State gets to decide what is criminal.

Part of what makes CCs so consistently fraudulent is they’re sold to the community as “jobs training centers” but primarily their student base is taking academic coursework. It’s a train wreck, and for every legitimate job certificate issued, hundreds of worthless academic degrees are printed as well.

Buried in the book is a clever idea:

…job training degrees at community colleges require an academic component. Consider the “opposite.” What if all academic degrees required a job training component? Why not require all AA and BA degree recipients to take eighteen or so hours of job training course work–enough courses to earn a certificate or minor credential in medical transcription, culinary arts, or some other job-ready field?…

What an idea! We might even consider having non-academic degrees like Gender Studies also require, in addition to the bogus coursework, some legitimate work in hairdressing or something. At least those graduates will have other job options besides pouring coffee.

While students and faculty are getting destroyed by “cheap education,” the people running the place are making fortunes. The book contains a few fake news releases, such as a Poo-Bah who decides to give even a small fortune of the wealth, half his salary, rained down upon him back to the school:

“Let me explain…My 19,800 square foot house is paid for, my wife Michaela doesn’t want her Mercedes convertible anymore, my seven children have completed their university experiences in Switzerland, and I have a hard time spending $766,000 a year (post tax). At retirement in three years, my state pension is secure at $463,462 per annum for life, no matter what I do with my current salary.

That salary isn’t too far out of line, and the gentle reader needs to understand there are many perks to the job beyond insane retirement packages:

$62,000 yearly car allowance and $46,000 travel perks, which would include his wife…for trips including both national and international travel and Hawaii. Membership in the Northern New Mexico Hot Air Balloon Diners Club–$23,000 dollars monthly. An allowance for Michaela to cover weekly dog grooming service at the Proper Pooch and Poodle Pretty Pet Pantry. $750 a week, which is itemized as petty expenditures Presidential Membership at the Santa Koloas Country Club is traditional, historic, and permanent– and has no connection to other salary package adjustments.”

One final shot at a fake headline that’s pretty close to accurate:

CCs often have such huge bureaucracies that they really don’t think education is a reason for the school. Instead, the college exists simply to support the administration. One thing nearly all administrators get involved in is the “strategic plan,” which can easy run 1,000 pages, covering all sorts of ideas for covering even more ground, the better to put up more palaces to hold more administrators to work on a more grandiose plan. When the Poo-Bah retires (every few years, usually), the plan is scrapped, and then all the admin get together to build an entirely new plan from the ground up.

It’s pure madness, but par fot the course as a community college.