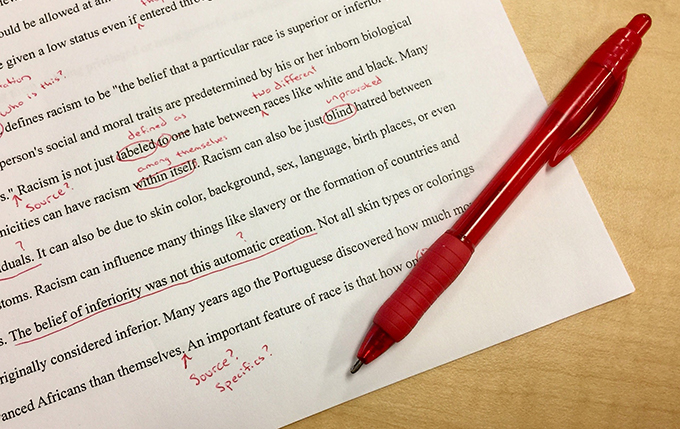 In 1973 the late Donald Murray published an essay in The Writer in which he argues that writing begins when the first draft is completed. From then on, he says, the writer revises, reads and changes their words, closing in on the meaning they are trying to make. Revision isnt a virtuous act, Murray states, it is simply an integral part of the writer’s practice. No more, no less. You write, you revise.

The writer – or the maker as Murray calls them – has to learn to read their own work critically, but not so critically that it paralyses them. They must be able to read in order to cut away the meaning-less and get nearer to what they want to say.

Revising for meaning cannot simply depend, Murray asserts, on the feedback of others. Other people do not necessarily know what the writer is trying to say. Readers’ comments may point the writer in a direction that they don’t want to take. The writer may even be unaware of the going-off-course effect because they are not yet sure themselves where their writing is going. Writers need to be their own best critical readers. Murray suggests an order of critical reading for meaning-making revision work. While his advice on ordered reading is directed towards fiction and non-fiction writers, it is also salient for academic writing.

When I first read Murray’s essay, a long time ago now, I was pleasantly surprised to see his reading order laid out, as it is pretty well what I do in my own revision. It is also the order I use for reading multiple drafts of doctoral chapters and theses (although I am now thinking about Murray’s comments about writers not relying too heavily on the feedback of others.)

In case you dont know Murray’s work, I’ve adapted his critical reading order list here. I not only like his list, but I also like that he says that makers don’t always do these steps in a neat linear fashion. Experienced writers combine some of these steps.

The idea of this Murray revision strategy is to use these nine steps as questions to guide your reading of your own draft text.

Does the text contain enough information? Murray argues that all readers need to find accurate and interesting information in a text. Academic readers probably expect more information and more of information than other readers, they want to find analysis. They also want references to other literatures and to data sets to ensure that they can trust the information provided. If there isn’t enough ‘stuff’, an academic text will have no foundation and can easily be blown over, just like the three little pigs’ house of straw.

Writing must convey something of significance. Each piece of information in a text provided leads the reader towards a meaning worth making, Murray says. Academic readers expect a novel and worthwhile contribution from their reading. So writers need to ask whether their text has a real point to make.

Successful texts connect with their readers. Academic texts are no exception to this “rule”. Does the text have a sense of the likely academic reader? Are there sufficient signs and signposts which will help the reader to connect with the text and to follow its meaning making moves?

While academic writing genres are often predetermined, it is always worth querying, for example, whether you have chosen the right one. Is the text in a form suited to both the audience and your purpose? Is what you are trying to make a blog post really a paper, and vice versa?

Academic writing is most often an argument. Ask then, is the reader taken logically through the text to the end point? Is each move in the argument backed by the appropriate amount and kind of information? Are all of the moves in the right order? In the order that readers expect and that is part of the genre? Perhaps this is the time in the revising process, Murray suggests, where the writer needs to construct an outline (sometimes called a reverse outline) in order to reveal and check the “hidden spine” of the text, the logic of its construction.

Each section of the text now needs separate attention. Does each section have enough of the right information for the reader to be able to follow the moves of the argument? Does the reader have enough guidance to understand what this particular section does, and its place in the overall text? What needs more work?

While working on developing each section, the writer also needs to keep an eye on the whole.  One section must not get so developed that it grows more substantive in length or information than is warranted by its contribution to the whole. Is the text balanced?

The writer works on making sure that the text is written with authority, that their critical, evaluative, individual stamp is marked on the text. Does the text feel and sound like it’s you as the writer?

The writer/maker now, Murray suggests, moves closer and closer to the text. “Each sentence, each line, each clause, each phrase, each word, each mark of punctuation, each section of white space between the type has to contribute to the clarification of meaning”, he says. Every change has to be checked, he suggests, to ensure that it adds to the meaning – not detract or obscure. Murray sees this as an enjoyable stage of revising – new meanings appear unexpectedly, as writers “rub words against each other” and as the potential multiple meanings of individual words come into play.

I like Murray’s emphasis on the importance of crafting.

I am not sure I always do enough to point the PhDers I work with towards the pleasures of word-crafting. I am sure that I stress the necessity of revising and the inevitability of multiple versions of a text. Perhaps making the notion of making as explicit as Murray does might help to indicate the enjoyable aspects of revision. But regardless of whether I – or we –  can reach enjoyment in revising, I reckon that Murray’s order of reading steps are still very helpful for both doctoral writers and their supervisors.