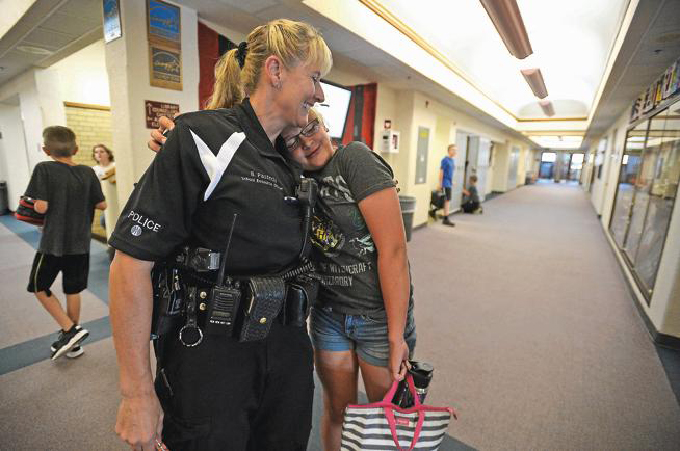 Despite legitimate concerns about the effects of placing school resource officers in the nation’s schools, the reality is having these officers on a school’s campus can literally save lives and avert tragedy.

That much became clear on March 20, when school resource officer Blaine Gaskill rushed toward a shooter who had opened fire at Great Mills High School in Maryland. He effectively stopped the shooter, who had already wounded two students.

Gaskill’s heroic work stands in stark contrast to that of Deputy Scot Peterson, who was seen on video footage standing outside Marjory Stoneman Douglas High School in Parkland, Florida, as the school shooting there was underway. At Marjory Stoneman, 17 people, mostly students, were killed on Feb. 14.

So why do some resource officers perform so well while others don’t?

The need for training and standards

What makes a school resource officer successful, though, isn’t only about how they respond to emergencies. In fact, a critical part of their role is in prevention. Stopping school violence before it ever begins relies heavily on the training that school resource officers, commonly referred to as SROs, receive or don’t receive.

I make these observations as the director of the Massachusetts Aggression Reduction Center and as one who has co-authored a technical report on campus violence prevention and response to active shooters.

Incredibly, there are no national standards – and in many cases no state standards – for school resource officer training. That means there is little consistency in how SROs are prepared to work in schools.

While school resource officers have already undergone regular police training, SRO training that exists tends to focus on legal issues or school security, as opposed to other things like de-escalation techniques, bullying and cyberbullying, child development, symptoms of trauma, or educational issues, such as working with children with special needs.

In my opinion, this lack of training is one of the factors that is fueling the debate over the use of police officers in schools. The U.S. Department of Education has recommended that school resource officers not be involved in school discipline, as inadequately trained officers may inadvertently escalate problems or criminalize students and contribute to what has come to be known as the “school-to-prison pipeline.” This is a particularly sensitive issue when it comes to dealing with minority and disabled students.

In 2015, Deputy Ben Fields garnered national attention when a cellphone video emerged of him appearing to body slam and drag a female student across a classroom at Spring Valley High School in Columbia, South Carolina. Such incidents force us to question the wisdom of putting police officers, particularly officers not trained to work with children, in American high schools.

To complicate things further, one study that examined the impact of SROs found that their presence in schools was not all good or bad. For instance, while arrests for disorderly conduct increased, arrests for more serious offenses decreased.

And yet other studies suggest how positive an influence school resource officers can be. Research on almost 2,000 students found that youth who had positive opinions about police officers reported feeling safer in schools with SROs present. In a study in which researchers interviewed dozens of SROs, officers themselves tend to emphasize the importance of informal discussions and education, instead of being overly reliant on formal discipline, whenever possible.

Training is emerging as key in helping SROs successfully increase school safety, as recognized in a U.S. Department of Education guide on improving school climate and discipline and “A Framework for Safe and Successful Schools.”

Yet despite a high level of consensus among researchers and criminal justice experts that school resource officers should undergo specialized training, few of the 19,000 SROs in the United States are in fact trained.

Gaps in training could also explain the difference between the responses in Florida and Maryland.

In “Campus Violence, Prevention and Response,” a 2008 report that I co-authored, my colleagues and I recommended that campus officers should all be trained in active shooter response tactics. In an active shooter situation, as my colleagues and I argued, campus police need specialized equipment to gain forcible entry into locked buildings and classrooms. This is different from traditional training, where police may be instructed to wait outside. Their staffing levels need to be adequate for the size and layout of the school.

But our report also made recommendations about prevention. A key recommendation was that school personnel need to be trained to identify students at risk.

The Parkland school shooter clearly demonstrated many such warning signs. This is one of the reasons why police there are reviewing why all these warnings did not suggest a significant pattern to local police.

Author Bio:Elizabeth Englander is a Professor of Psychology, and the Director of the Massachusetts Aggression Reduction Center (MARC) at Bridgewater State University