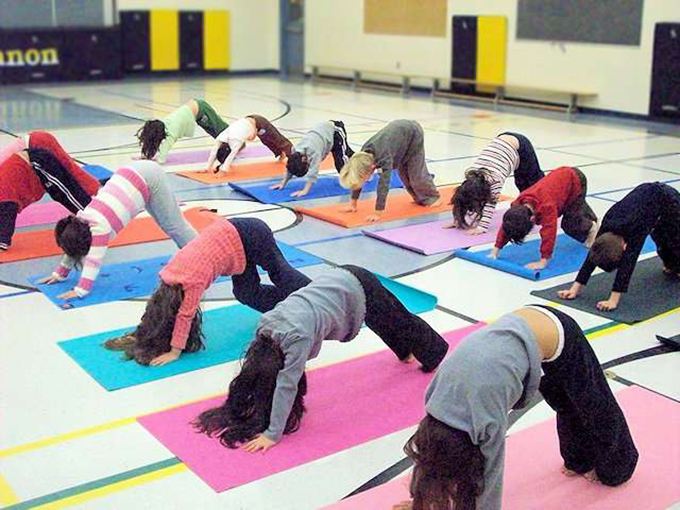 Yoga has conquered the world. The postures of the crane, the raven or the half-grasshopper are all images of an activity that has become a global phenomenon in a few decades. Sports activity, spiritual awakening, art of living, yoga has become a “world-activity”. How to transpose into the school universe one of the most widespread sports practices in the world? How could yoga help transform teaching?

Marie Kock showed how the worldwide diffusion of this ancestral activity had transformed it into a “new Age” practice, into a relaxing activity for people in search of personal development and happiness. A fashion victim and reinvented by the West , yoga has become a business .

It is also a political weapon. Narendra Modi’s government of India has made it a tool of nationalist political glorification and seeks to maintain its global leadership in yoga. Celebrated on an international day , June 21, yoga therefore goes beyond the simple status of an activity of bodily expression.

The activity is also recognized as the intangible heritage of humanity and its presence is global, practiced by nearly three million French people and hundreds of millions of people around the world. As a sports activity, it has national, regional and local structures and a multitude of associations which disseminate these different practices.

During the lockdown, the word yoga was one of the most requested in search engines. We have seen that purchases of yoga mats have increased dramatically during the first month of confinement in France! Likewise, during this period of unprecedented health crisis, blog articles and yoga initiation videos, live or replayed, have grown exponentially.

Sporting and relaxation practice, yoga has the aim of spiritual awakening through the knowledge of one’s body and one’s breathing. Studies show the benefits it brings when combined with meditation . Its regular practice improves attention, concentration, stress management and emotions by reducing the level of cortisol , a stress hormone. The positive effects of yoga on cognitive learning are starting to be recognized, as are their contributions to the well-being of students and teachers .

Yoga is already present in French schools, in nursery , primary and secondary . This movement seems to be growing and we are undertaking a study to quantify this growth, which is still poorly known in France. Many teachers are showing their growing interest in introducing yoga into education .

The first initiatives to introduce yoga to school were carried out by teachers who practiced yoga themselves. For them, yoga was defined as a set of bodily and respiratory exercises which did not exclude a spiritual aim. Currently, more and more teachers are emphasizing the interest of yoga for a coordinated work on breathing and knowledge of one’s body. The spiritual dimension is less and less present for the benefit of physical and mental well-being as well as the creation of a quality school climate for learning through an activity of active relaxation .

Approved associations, such as the RYE association , support the many initiatives within the National Education which, for its part, offers yoga training and workshops .

The educational institution is less and less reluctant to integrate this activity of bodily expression. The teachers who practice it with their classes emphasize the favorable reception of parents and children.

The question that remains is that of the place of yoga within the school. Such alternative activities highlight the need for an education that takes the child and adolescent as a whole, with cognitive but also physical and emotional learning. Will school yoga remain the work of activist teachers, will it be integrated into existing disciplines or will it become a lever for developing transversal activities and creating a real integral education?