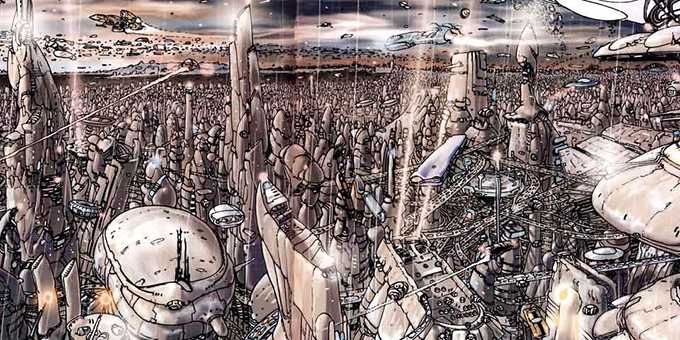 It’s the year 2102AD. Something has been found underneath Sector 301 of Mega City One. Judge Dredd is on his way to the scene. He’s thundering in from above on his heavy-duty Lawmaster motorbike. Visible below are shiny Zoomtubes, weaving their way through the monolithic habitation blocks and unbroken urban blight. They pulsate with computer-controlled convoys of fast-moving automated vehicles, speeding along inside a vacuum.

As many as 800m people live in Mega City One. It’s crowded. Convulsing. Choking. Breaking under its own weight. The civilian population is mostly illiterate, since artificial intelligence removed the need for most types of work. But they are restless, always on the move and often in trouble. This is why street judges like Dredd exist. To dispatch instant justice, to restore order by force – they are judge, jury and frequently executioner: they are the law.

Mega City One has a secret. It is built on top of abandoned and ruined “under cities”, from before the nuclear war of 2070AD. Dredd is descending into this dark undercroft now. Spotlights have been set up around a crime scene, but this is not what attracts Dredd’s attention. No. His eyes are drawn to an old Brutalist building from 1970AD. A set of rusty steel roller-shutter doors have been ripped from their moorings. Inside, there appears to be a brand new, petrol-burning vehicle. These were mass-produced in the 20th century, but now they are incredibly rare and expensive antiques. 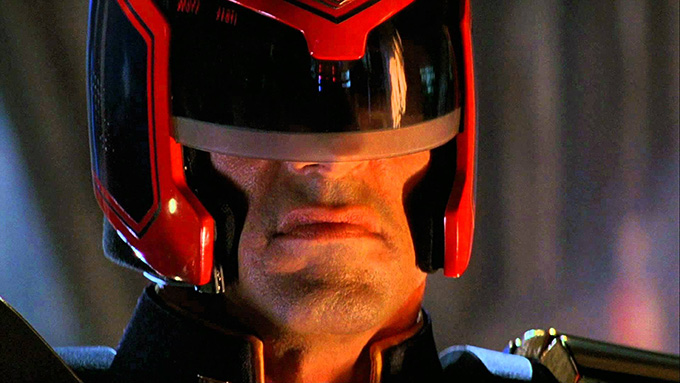 Judge Dredd: on the case.

Why it is here is unclear. It sits inside a laboratory of some kind, connected to ancient silicon-based computers. A transport professor from the City Central De-Education Establishment is already sitting inside the vehicle, looking around in bemused wonderment. “They were trying to steal this” she says. “It’s a completely intact driving simulator laboratory from the 21st century”.

Dredd pauses for a moment… “what is driving?” he asks.

The professor chuckles. “About 100 years ago, people would sit here and turn this large wheel with their hands to send the vehicle left or right. At the same time, they’d press these pedals here with their feet, to start and stop”. Brushing some cobwebs away from the top of the instrument panel, the professor goes on: “Sounds dangerous doesn’t it. And in some ways it was. It’s astonishing how something so primitive could be used by so many people.” 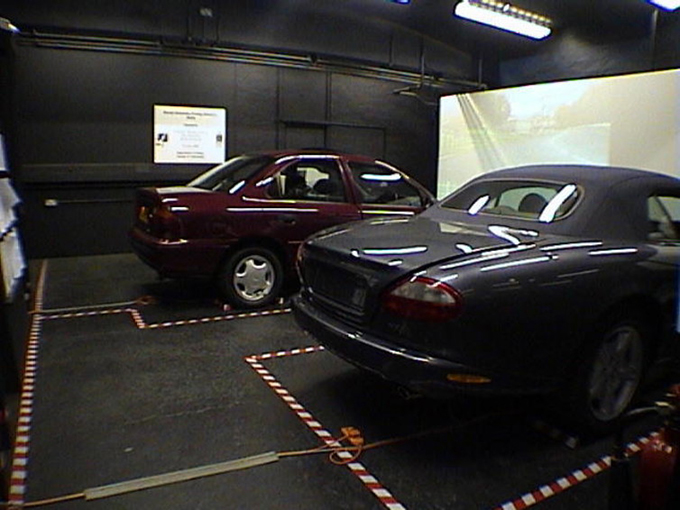 She reaches into the passenger seat and picks up a thick, dusty folder containing hundreds of sheets of paper. “People used to think driving was a simple activity, but these documents prove otherwise. Look, here: it’s a task analysis – an antiquated method of research based on hundreds of hours of observations, looking at how people used to control these things. Did you know, people had to perform more than 3,000 individual tasks, at the correct time, in the correct sequence, in order to avoid crashing? Amazing. In fact, people had quite a lot of trouble adapting to automatic vehicles.”

Dredd regards her incredulously. “I know!” she says, smiling, as she shifts herself out of the driver’s seat and walks to the other side of the laboratory. Dredd follows, intrigued. Part of the roof has collapsed and water is leaking in, dripping on piles of old paper books and broken coffee mugs with the crest of a once famous university printed on them. The professor crouches down and peels away a thin sheaf of water-damaged paper from the pile.

“This will take years to go through, but look at all these: these old scientific papers offer a fascinating insight into how people in the 21st century were thinking about vehicle automation. They categorised it into six levels, from zero automation –- a bit like that petrol-burning vehicle over there, where the driver does everything – right through to full automation, like we have now.”

“What’s interesting are the levels in between. For years, their Artificial Intelligence systems weren’t sophisticated enough for full automation in all conditions. So the vehicle controlled some of the functions, such as automatic cruising on the highway – their equivalent of a Meg-Way. But the human driver had to do the rest. And judging by all these other ancient texts lying here, it seems that caused no end of trouble.”

“Really?” Dredd replies, with growing curiosity. “I mean, it just seems obvious that AI is a much more efficient way to pilot our vehicles – especially when a computer controls the whole traffic system. Why would that ever be a problem?”

“You’ll like this then,” the professor says, as she bends down to pick up another text. “They called it the study of ‘human factors’. Look: this describes some of the experiments performed in this laboratory a century ago. It says that when a crude safety technology called ‘anti-lock brakes’ was introduced in 1985AD, people in experiments drove faster and braked harder, because the new technology made them feel safer.” 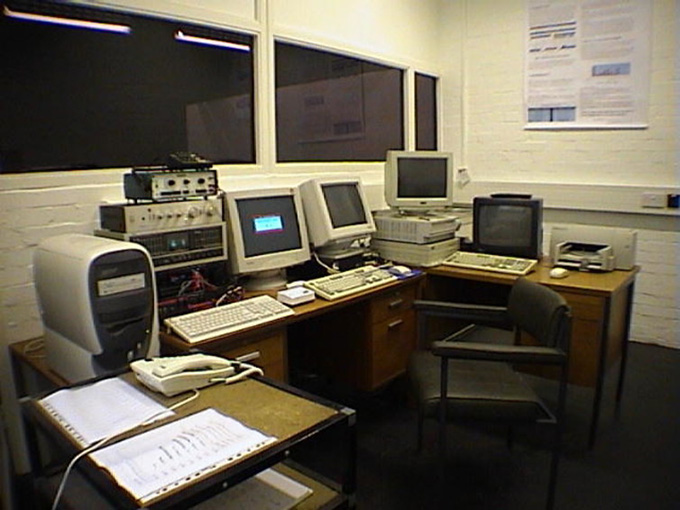 “And this one here. This is an early study into night-vision from 2000AD. Far from making things safer, the tests showed that it actually made drivers speed up, even in thick fog. And this one here, look, it shows that as cars got more technically advanced, their drivers became more isolated from the road and began to lose touch with what was happening around them. It seems as if old-fashioned drivers actually needed some of that technological primitiveness to remain ‘situationally aware’. So up to a certain point, having things to do actually helped them to drive better.”

This was beginning to make sense now: AI hadn’t replaced human drivers overnight. It had taken years, decades, for automated transport systems such as the Zoomtube, Robochairs, and Mo-pads to be developed and refined. This slowness to adapt was why you could so often hear Mega City One’s chief transport engineer bemoaning the fact the city would be an engineer’s paradise, were it not for the humans. Dredd bent down to pick up a red book from out of the puddle at his feet.

“Ah yes, Human Factors in Automotive Engineering, I’ve been searching for a copy of that text for a while,” the professor says. “In the back they try to imagine what driving would be like today in the 22nd century. It’s rather quaint.” Turning to face him, the professor looks Dredd straight in the eye: “Still, I wonder what the inhabitants of this ancient city would have thought of Mega City One?”

“They would have learnt a lot from our advanced technology,” Dredd replies, with confidence.

Turning away a little wistfully, the professor says to herself, quietly: “I’m not so sure. Mega City One is like a giant machine. The technology rules. It is a logical extension of the ways we humans used to think about cities and transport, back when this building was constructed.” She waves her hand vaguely at the decaying concrete structure they’re standing in.

“But maybe we could have taken a different direction. A more human-centred direction. Instead of building a city which is optimised for computers, to make things more efficient, we could have used this powerful technology to meet human needs. Like the need for identity, freedom and participation. Heck, people used to enjoy driving some of these old relics…”

In the end, the professor has the last word: “Don’t you see, the harder we drive the technology, the more we seek to make things logical and machine-like, the more we get all sorts of unexpected problems, which we humans still need to fix. That’s the problem with all these dystopian comic book cities of the future.”