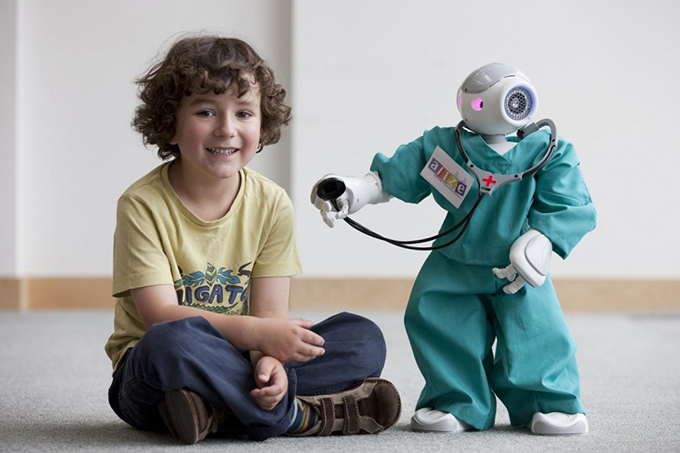 Social robots appear to be entities with feelings and relational capacity. They are technologies with pretensions to be social as people and other animals. Social robots do not use them, we relate to them. Your ability to address us on our own terms is the basis of your wonderful potential. However, it also involves certain concerns that are interesting to know.

Social robots have a particularity to have a body. This physical reality that gives them a potential emotional impact on us far superior to that of their digital colleagues.

His appearance and behavior-gestures, language, expressions-lead us to attribute intentions, emotions, understanding or empathy. They are designed to attract and engage us with their biologically inspired appearance and behavior. To a certain extent, we see them similar to ourselves. At a deep level we recognize them, so the interaction with them becomes more natural and intuitive.

Thanks to these social capacities, they are increasingly present in any area of ​​our public and private lives. They are out of the laboratories and providing their services in such sensitive environments as early childhood education, therapy and the accompaniment of the elderly. Specific social robots are designed for education, for treatments of certain disorders, to keep company. Some of these robot-based interventions have had very promising results.

But, surprisingly, we still know very little about the emotional effects that social robots cause us. There are still few voices discussing the convenience or not of generalizing the deal with artificial agents. Is not a subject sufficiently controversial? Do not robots have a huge transformational impact on our relationships, our affections and our thoughts?

Fortunately, the scientific community of human-robot interaction has long been discussing ethical considerations . We should analyze among all if these links with robots can really contribute to a good life .

With the accumulated knowledge, we already know that our relationship with robots causes, together with wonderful utilities, undesirable effects, some of which I would like to point out here.

Some challenges that we should face

There are many open questions and many concerns raised . We need more research and debate about how it affects us – as individuals and as a society – to interact with robots, to make the right decisions. We need to know more and be critical beyond our fascination with these creatures in order to design the robots that suit us and to use them responsibly.