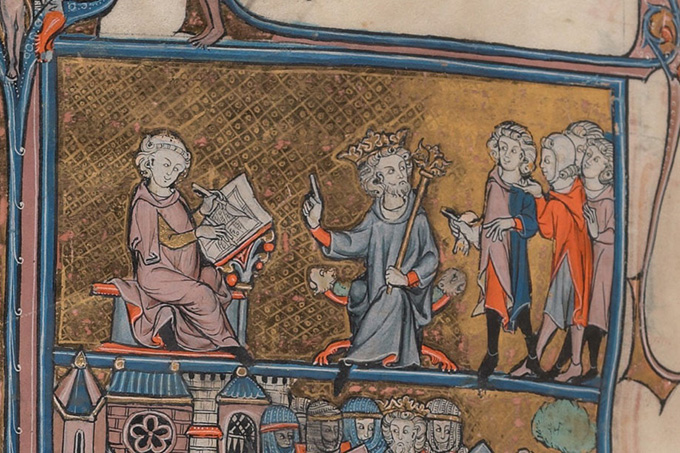 My earliest encounters with Chaucer’s Canterbury Tales are etched into my torn and tattered copy of the The Riverside Chaucer. I have even more indelible memories of my first seminar: sitting around a large table, forcibly holding down the edges of the hefty paperback, and nervously waiting for my turn to read a line of the General Prologue. Out loud. In Middle English. Even now, the shy, introverted student I once was recoils at the thought.

To give voice to Chaucer was a daunting experience for another reason. It was the first time I had ever read a word of the so-called “father of English poetry” and, as a working-class student of South Asian heritage, this was a big deal. As a teenager, I emptied the shelves of my local library devouring everything that I recognised as Great Literature: Dostoevsky, Maya Angelou, Jane Austen – and one summer I was electrified at discovering Zadie Smith’s White Teeth. But my first opportunity to read Chaucer came at university, as a second-year undergraduate at the University of Leicester, in my home city. Many years later, I was awarded a PhD on Chaucer and the Islamic world there.

So I was truly shocked to learn on social media this week that Leicester proposes to stop teaching medieval literature, to reduce its early modern syllabus and to close its English language programme. As a medievalist, my research and teaching engage deeply with questions of multilingualism, race and decolonisation – and the foundations for this were laid at Leicester.

I was particularly appalled to discover that the proposed changes were initially designed to make space for modules on race, gender and sexuality, and to decolonise the curriculum. In recent days, the university has attempted to retreat from this position. Nonetheless, the idea of culling whole periods of literature is absolutely antithetical to the twin goals of diversifying and decolonising English as a discipline. If you don’t give students an opportunity to study medieval literature, a field that is deeply engaged in discussions of race and gender, the university will be disinvesting in the education of their students, especially those from non-privileged and black and ethnic minority backgrounds.

The challenges and disadvantages faced by BAME students in higher education are all too real, from racism on campus to the attainment gap. They enter a system with deep structural inequalities where few will be taught by a non-white academic. Recent data show that only 17 per cent of academic staff employed across the UK are categorised as BAME. Few of these are employed in English departments, even fewer as medievalists and early modernists. So what happens when you remove the opportunity for students, particularly black and ethnic minority students, to read Beowulf, Chaucer and Milton? They are robbed of the chance to read texts foundational to the history of English literature and to engage in the rich, energetic work that is tackling racism, white supremacy and sexism in the discipline. They are also robbed of a form of cultural capital that continues to have real significance in a society where class and race intersect everywhere. To get to grips with Chaucer and Milton, to really understand their complexities, context and continued relevance, students need access and opportunity. As Margaret Busby, the UK’s first black female publisher, remarked in a recent Guardian interview, “I know about Chaucer and Milton and Molière as well – you know twice as much, not half as much.”

Leicester has a strong record of attracting the brightest students from non-privileged backgrounds, especially from the city and its surroundings. The broad curriculum that I was offered shaped the direction of my career as an academic specialising in the connections across and between medieval England, Europe and the Islamic world. As I push the boundaries of my own teaching in ways that seek to broaden students’ knowledge, I know this is only possible because of the thorough grounding I received as an undergraduate.

I am fearful too for the state of my discipline. As faculties come to reckon with their whiteness, as the focus turns to hiring practices and opening up spaces for future researchers with dedicated BAME PhD studentships, it is crucial that other doors should not be shut. The gateway to new texts, new languages, new worlds will be inaccessible to so many.

Does the full range of human experience only belong to the privileged? If universities such as Leicester stop teaching medieval and early modern literature, they hand over these periods to those crying out against the wokeness of decolonisation and seeking to preserve the past as an exclusively white space. It is perfectly possible to continue to invest in medieval and early modern literature and still diversify the curriculum. But you cannot seek to decolonise by divesting from whole periods of literature, and it is disingenuous to suggest otherwise. As my work on Chaucer and the Islamic world shows, his poetry and prose are as much the inheritance of students from the global majority as it is their white counterparts. We are all poorer without an understanding of Chaucer’s multilingualism and his debt to Latin, French, Italian and Arabic – a starting point for understanding the interdependence of cultures across the world, then and now, which, crucially, begins at undergraduate level.

Author Bio: Shazia Jagot is Lecturer in Medieval and Global Literature at the University of York. She is currently working on a book titled Distilling Chaucer: Arabic Learning and the Islamic World in Fourteenth Century England.