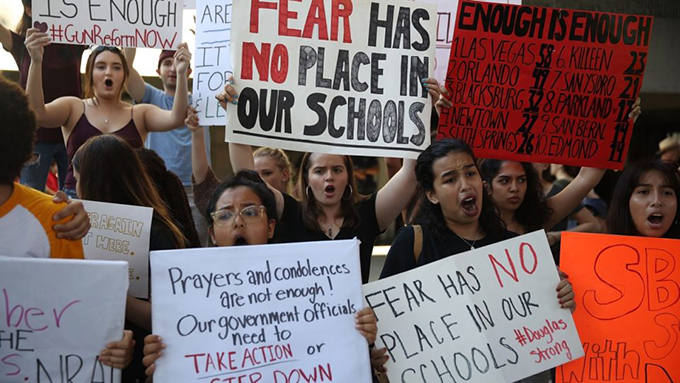 The United States Bill of Rights grants American citizens numerous freedoms such as those of association, religion and protest. US leaders have notably honoured and guarded James Madison’s prescriptions for this great experiment in democracy. Our courts and representatives have also systematically adjusted the scope of these freedoms to craft a safer and more equitable society for all. We have altered the blanket freedom of association with time, place and manner restrictions, for example, yet we encounter a staunch opposition to any discussion of comprehensive, sensible reform when it comes to the right to bear arms.

Special interests such as the National Rifle Association finance political candidates and wield remarkable control over gun policy, an area of reform that more Americans support in 2018 than at any other point in our history. Such a misalignment of public opinion and policy at both the federal and state levels signal great cause for concern for our democracy and a dangerous concern at that. Amid this troubling stalemate between fearful, frustrated citizens and unmoving, cowardly politicians, students must enter the arena and turn the tide of this, quite literally, life or death conversation.

Since I was five, I have lived with the reality of gun violence in America. On the heels of the 9/11 terrorist attack, a sniper terrorised my Washington DC suburb, firing sporadic shots from his white van in parking lots across northern Virginia. I distinctly recall my mother zipping a favourite doll of mine into my purple backpack one morning, explaining to me that I would have to play with my friends inside the classroom during recess for a while. After a month of closed blinds and cooped-up kindergarteners, investigators captured the sniper and my friends and I returned to the playground. My experience is not unique.

At an event I attended in Charlottesville last week, former chair of the Democratic National Committee, Donna Brazile, called out gun violence in our schools as the public health crisis that it is. Gun violence ravages schools both poor and wealthy, white and diverse, but leaves an especially perverse impact on schools and communities of colour. The headlines are typically dominated by gun violence on secondary school campuses but a recent investigation by the Collegiate Times at Virginia Tech found that 320 people have been victims of gun violence on college campuses in the 11 years since a Virginia Tech student killed 32 people on their campus.

Public education has no hope of serving as the great national equaliser if students and teachers do not feel safe to learn together in their classrooms.

On 14 March, I joined student leaders from all backgrounds and states in leading the University of Virginia’s classroom walkout against gun violence. At 10am, hundreds of students gathered in front of the campus rotunda to remember the students and teachers killed in Parkland, Florida, at Marjory Stoneman Douglas High School on 14 February.

Student Council members and I also led gathered activists in chants and callbacks, demanding lasting and immediate policy reform to make our institutions of higher education safe places to learn and grow. These marches took the media by storm, demonstrating the extent of community concern and the power of the youth voice. How long would this most recent wave of anger and political pressure last, I wondered? Furthermore, would colleges and universities be included in a conversation that was largely dominated by K-12 student leaders?

College and universities present unique safety concerns in comparison with highly regulated elementary, middle, and high schools given their less-regulated campuses, steady flow of visitors and propensity for controversy as community public squares. And so, amid this remarkable groundswell of support for gun reform, I began to build a national coalition of college and university students who I knew could add depth and strength to this growing student movement.

Over the past month, I have worked with a non-profit organisation called the National College Leadership Council and Parkland students to garner student support for a letter addressed to leadership in the US House of Representative, Senate and the White House. In this letter, we proclaim that “we have had enough. We refuse to allow more violence. This cannot be the norm or the price of being a student in America.” We have called for common-sense gun reforms starting with a decrease in the number of guns allowed on college campuses throughout the country.

More than 80 student body presidents from coast to coast signed this letter, a grouping that represents the voices of more than 1 million college and university students. Beyond sharing this letter with top governmental officials, I’ve encouraged students to send this letter to their governor and congressional representatives, as well as submit it to their school newspapers. We hope that legislators in state and national chambers of governance will take seriously this statement of discontent with our current policy infrastructure. And we hope that they find inspiration in the young civic voice of our nation – a voice that cares deeply about the safety and welfare of the people in our communities.

Author Bio: Sarah Kenny was the University of Virginia student council president from 2017 to 2018 and will graduate with a bachelor’s degree in political philosophy, policy and law and a minor in women and gender studies on 19 May 2018.