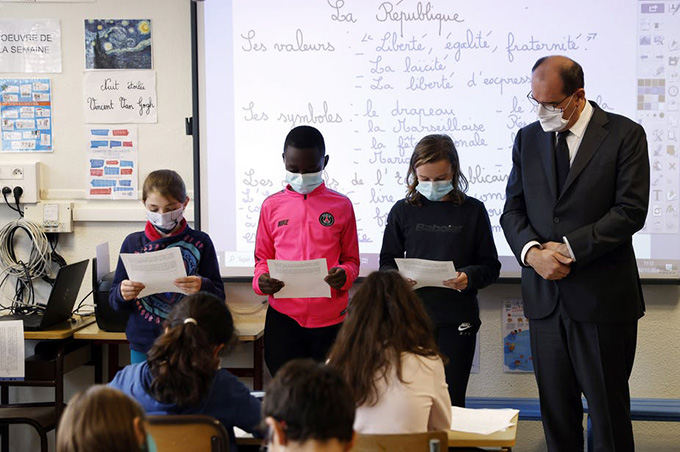 The murder of the schoolteacher Samuel Paty, beheaded by 18-year-old Abdoullakh Abouyedovich Anzorov in October 2020 after Paty had shown caricatures of the Prophet Muhammad during a civic education lesson, has understandably caused shock and fear among teachers in France.

Many teachers were already struggling to manage classroom discussions on sensitive topics such as the satirical newspaper Charlie Hebdo’s publication of the controversial caricatures. Some now fear for their personal safety.

My PhD research explores the impact of Islamist terrorism on education policy and practice in England and France. As I come to the end of my study, these events give rise to an unwelcome sense of déjà vu.

My interest in the topic began with the terrorist attacks on the offices of satirical newspaper Charlie Hebdo in Paris in January 2015 after it published the caricatures. The interviews I have carried out over the past three years show that these cartoons continue to cause upset and anger among some Muslim students. This leads to challenging classroom moments for teachers.

In the first week of school following the murder of Paty, some 400 students across France were reported to the ministry of education for refusing to take part in the minute’s silence in his honour.

Since Paty’s murder, there has been much talk about France’s “colour-blind” approach to cultural diversity, which emphasises that the same rights apply to all citizens. This is often considered to be in opposition to the multiculturalism of countries such as the UK, which gives greater space to minority cultures and religions.

French president Emmanuel Macron has responded to international criticism of his government’s response to the attacks by insisting on the singularity of the French approach, and the inability of Anglo-Saxon commentators to understand it.

However, this overlooks the striking similarities in the way the English and French governments have used the education system as a tool to promote social cohesion and build young people’s resilience to radicalisation.

Governments in both countries have sought to emphasise shared values in the education system. Since 2014, schools in England have been required to promote the “fundamental British values” of democracy, the rule of law, individual liberty, and mutual respect and tolerance for those of different faiths.

In French schools, there has been a renewed focus on promoting the Republican values of liberté, égalité, fraternité and the secular value of laïcité – which limits the expression of religious beliefs in public institutions such as schools – since the January 2015 attacks.

Other policies in both countries target students who may be at risk of radicalisation. Teachers are expected to report concerns about radicalisation to the school leadership or outside agencies. Education professionals are also being trained in spotting the signs of radicalisation, although this approach is more widely employed in the UK than it is in France.

The issues raised by atrocities such as the murder of Paty also have implications for how teachers operate in the classroom in England and France.

In the case of France, the attacks on Charlie Hebdo highlighted the difficulties that some teachers already faced in managing discussions around issues such as laïcité and freedom of speech.

In England, the need to engage students in discussions on contemporary issues as part of the fundamental British values policy – and to help them make sense of ongoing terrorist attacks – has revealed some of the same problems.

Teachers, school leaders and policy officials in both countries frequently state that some teachers lack in-depth knowledge of the issues they are increasingly called on to address in class. What’s more, many are afraid of being unable to manage the emotive student responses that sensitive subjects sometimes generate, and, ultimately, of losing control of the situation.

This was a particular concern for some respondents in France, who felt that a tradition of teacher-centred learning – involving lots of teacher talk and little time for discussion – meant that some of their colleagues were particularly nervous about managing classroom debates.

In England, the declining importance of citizenship education in the English education system limits opportunities for engagement with civic values and contemporary issues. This has been compounded, as one school leader pointed out, by a lack of in-depth guidance from the government on how to promote fundamental British values.

My research shows that teachers need to be better prepared for these difficult conversations. This preparation should take place through initial teacher training and continuing professional development.

This training does already exist in some areas of both France and England. In some parts of France, teacher trainers work closely with teams of teachers over extended periods of time on themes such as discussion and debate, students’ religious beliefs, and talking to young people about terrorism.

At a secondary school I visited in London, teachers plan and teach citizenship education days collaboratively. This provides teachers with a degree of support in handling tricky moments.

Participants in my research also underlined the importance of teachers showing respect towards their students in these conversations. There was a feeling among some school leaders and teacher trainers in France that teachers’ own beliefs and how they express them in classroom debates could contribute to some of the heated confrontations that have made the headlines.

It seems that teachers in both countries are not immune to a wider climate of anxiety around Islam and suspicion towards Muslim populations. This may lead teachers to enter into some conversations with a degree of hostility.

This message will need to be delivered carefully. In a context where teachers may be fearing for their safety, it is important that such warnings are not experienced as criticism. At the same time, it would be unfortunate if the horrific murder of Samuel Paty made debate on some of the pressing issues at the heart of these challenges impossible.

Author Bio: Jonathan James is a PhD Candidate, Department of Education, Practice and Society at UCL