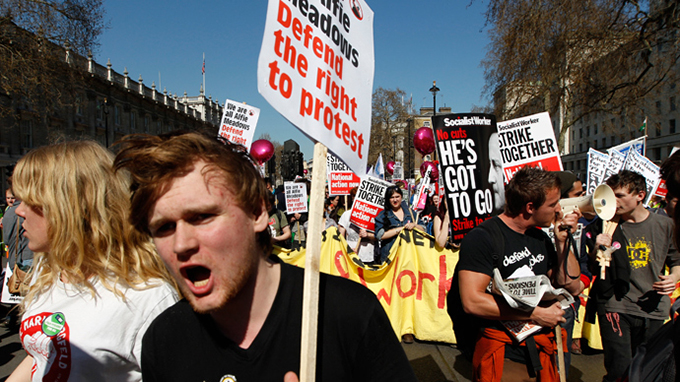 In scenes unprecedented in previous school shootings, the past few weeks have been marked by students taking to the streets, to the media, to corporations and elected officials in protest over gun practices and policies.

Responses to these teens have been mixed. Some have celebrated their passion. Some concluded that the students are immature and don’t yet fully grasp longstanding issues with the Second Amendment. Some questioned the voices and perspectives of the teens. Still others see the protests as an inappropriate use of time that might be better spent reaching out to loner students who may be prone to future acts of violence.

Some schools have even threatened to take disciplinary action against students for engaging in protests during school hours. This has prompted universities like my own to promise students that disciplinary actions that stem from peaceful protest will not be held against them when they seek college admission.

What schools should do

Immediately after the Parkland shootings, some scholars urged society to consider “the nature of education and schooling in American society.”Indeed, we need an educational response to the shootings. This response should account for the purposes of our schools within American democracy and offer students opportunities to learn, even in the face of tragedy. As the author of a new book on how schools can get students to become more civically engaged, and a 2012 book on how schools can cultivate the skills necessary for political dissent, I contend that the student protesters that have emerged in the wake of the Parkland shooting offer insight into a worthwhile response.

While seldom acknowledged, students have a right to engage in political dissent and, more significantly, the entitlement to an education that nurtures their ability to do so. In the 1969 landmark Tinker case, the Supreme Court ruled that students do not “shed their constitutional rights to freedom of speech or expression at the schoolhouse gate.” But, the court held, it is reasonable to limit protest activities that interfere with the opportunity for others to learn. The right to dissent is not explicitly stated in the Constitution, but rather is a civil right that arises out of how we understand good citizenship and thriving democracy. Dissent allows for a proliferation of views on the good life. It sparks conversation and ignites change to better align practices and policies with the wishes and needs of the people. It keeps democracy vibrant.

Dissent is an American tradition

Often, we think of student protest as a type of public self-expression that should not be hindered as long as it meets certain criteria, like not preventing other children from learning. In America, our democracy requires the consent of the governed. Our Declaration of Independence even says that when we are not in agreement or when our well-being is in jeopardy, we have a duty to speak up. It’s the American way and has been from the time the nation began.

It is only with the opportunity and capacity to dissent that we can determine if our laws and systems guiding us are good or just. Further, in order to invoke our right to dissent, citizens have to know how to dissent, which calls into play the role of schooling.

As a scholar in the philosophy of education, I would argue that our children, as burgeoning citizens, are entitled to such an education in our schools.

There, they should learn the skills of dissent, including consciousness-raising, coalition building, persuasion, public demonstration and pursuit of traditional government avenues for change. This type of instruction is happening in some schools, but not systematically enough across all schools, as courses in civics and social studies have been cut in order to focus on testing and such. Students receive even less of this kind of instruction in poorer schools.

And, our students must learn about the responsibilities of citizenship that correlate with their right to dissent. This includes learning how to evaluate the justice of laws, how to distinguish effective dissent from simple rabble-rousing, and how to protest in ways that do not unduly infringe on others.

Teaching children how to dissent in response to a violent situation that they feel threatens their well-being is aligned with the purposes of democratic schooling. Indeed, a flourishing democracy depends on such an informed and active citizenry who will speak out when they find laws to be unjust.

Author Bio: Sarah Stitzlein is a Professor of Education and Affiliate Faculty in Philosophy at the University of Cincinnati