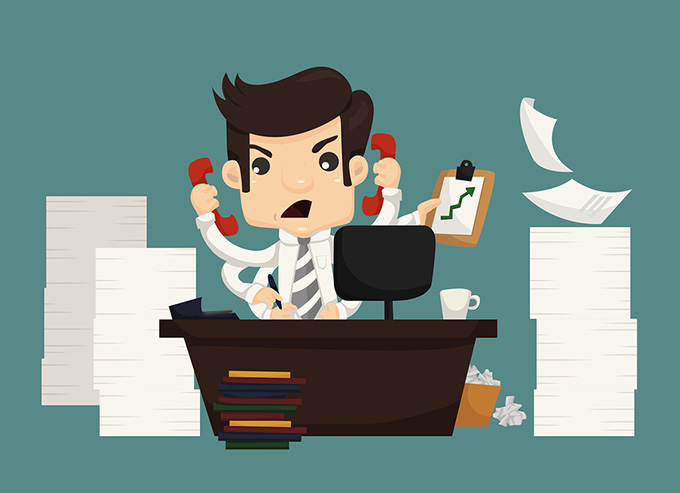 If academic overwork had a Facebook status it would be ‘it’s complicated’.

Academics work hard, in part, because we have to, in part because we love it, and partly because of dedication to our students. But the endemic overwork problem must be addressed. The pressure to work long hours translates through the academic eco-system to PhD students, who are often tasked with impossible workloads too. When unrealistic expectations are a feature of PhD study; stress, overwork and mental health issues are the inevitable result.

Stopping the vicious cycle is a systemic AND a personal battle. I battle over-work by being a proud and active Union member. I battle the problem personally too, by trying not to over-work myself. I don’t always win.

To be clear, ANU were not foisting an unrealistic workload on me. My overwork problem was at least partly a problem of my own making. At the start of the year, I told you I was working 60 hour weeks, so I set myself the task of trying to do ‘Less’ again in 2018. It’s halfway through the year (yes, already!) so I thought I would report in. Am I doing Less? The answer is a qualified ‘yes’ – but I have only achieved this with the help of some software that my friend Dr Jason Downs put me onto, called ‘Timing‘.

Timing is like a FitBit or Apple Watch, but for work. Before you ask, Timing is a Mac product, but RescueTime is a cloud-based product with similar functionality. Basically Timing lurks in the background and watches how you use your computer. Once you’ve spent a bit of time training it, Timing automagically categorises your work. You can quickly add in non-computer based tasks in the timeline view to make sure you capture all your efforts. It doesn’t take much to keep the record accurate, and the effort is worth it because Timing allows you to access a range of neat dashboard views. For instance, here is a visual summary of my whole year so far: 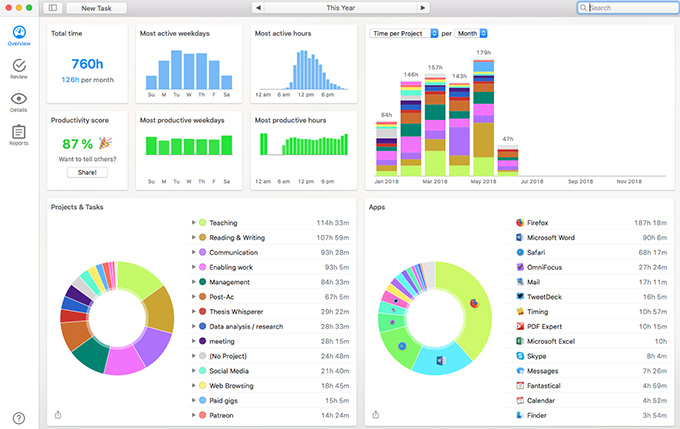 If I divide my hours worked by the available work days I have been running Timing, the average is 42 hours of work a week. ANU only pays me for 35 hours a week, but I work for myself too. I cut a deal when I started in 2013 that I own the Thesiswhisperer. ANU does not pay for me to blog, but nor can they profit from it. If I take out my social media activities (my new YouTube channel and outside paid work) I get down to 38 hours a week for ANU.

So, I’m donating about 3 hours a week to my employer. I can live with that – for now.

If I am going to donate to my employer, at least I know the size of my donation. Timing gives me the comforting illusion that I am in charge of my time by enabling me to assign a productivity ‘score’ to each kind of task. Tasks you consider a bit of time waste, like email, can be ‘tuned down’ while productive work, like writing or teaching, can be ‘tuned up’. A glance at the productivity score lets me know how my week is tracking. If it’s high I am getting a lot of good, useful work done; if it’s low, I am in too many meetings or noodling around on expense claims or social media.

One thing I learned from my productivity score, is the weeks I work more hours, the less productive I am. Here’s a comparison of two weeks, one at nearly 55 hours (what used to be a typical week for me): 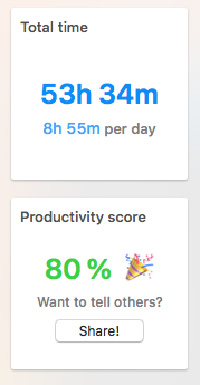 And one at almost exactly the ANU enterprise bargain agreement of 37: 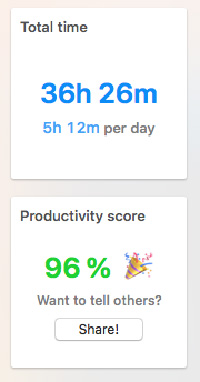 Even though I work the odd stupid hour week, I am feeling much better. I don’t want to give the impression that this semblance of work/life ‘balance’ was easy to achieve. I partly created the problem, but in doing so, I had set cetain service delivery expectations. Now I had to wind them back – this was hard. I had to give a lot of pushback at work, which did lead to conflict as well as feelings of guilt, powerlessness, and anger. Coming back from the brink of burn-out is also just intense, bodily work. For the first couple of months, I cried in my office nearly every day. I leaned on a lot of people: friends, colleagues, sympathetic mentors. I saw a therapist – more than once. I acknowledge that even being able to push back is a form of privilege that’s not available to everyone.

A couple of weeks ago, there was sad news out of Cardiff University about a lecturer who took his own life, apparently due to stress and over-work brought on by marking season. My academic social media network lit up with the story. Everyone was horrified because the situation was just so… relatable. On Facebook, one colleague shared a story about how she had to take medical leave because her eyes ACTUALLY STARTED BLEEDING during an essay marking marathon. No one should have to work this much just to meet expectations. Reflecting on the parallels between that Cardiff lecturer’s experience and my own, pushing back before I hit crisis point may well have saved my life.

People usually screw their faces up when I tell them about Timing; I guess because it sounds like yet more neo-liberal performance management bullshit that has got us in all into this situation in the first place. But I would argue that monitoring your own work is profoundly different than beingmonitored because the power of the data is in your hands. For example, the data from my Academic FitBit came in very handy when I was negotiating a reduced workload with my manager. She wanted me to do a 50% teaching load, which I initially resisted. But she was right: Timing showed me that I do, in fact, spend 50% of my ANU time on teaching. My performance measures may as well reflect that fact.

Timing has enabled me to finally (FINALLY) crack the academic project management problem: a long-term goal of mine. I used to work in architecture offices where time really was money. I learned the power of breaking a project up into different tasks and using these calculations to tell a client when you would deliver and how much it would cost. I’ve  tried for many years to apply architecture project management techniques to academia, without much success. Architects are mostly bad at doing time estimates (which is why just about every building takes longer and costs more than thought), but they are still miles better at it than academics.

Making and managing a time budget is a critically important skill to learn when you are a student, but one that is rarely, if ever, taught. The most common reason people go over time on their PhD is because no one anticipated – or even asked the student to estimate – how long tasks might take. Up to now, I have been no better than most supervisors. I do have some rules of thumb which I share with my students. For instance, I tell them that every hour of interview time is about six hours of analysis, but I don’t know if that’s true! I just heard it somewhere. I just know it’s a good supervision tactic to do a back of the envelope calculation in front of a student to show them the project plan to interview 500 people is unrealistic. I know my students are likely to be slower than me, but if I know how long something takes me I can use the ‘multiply’ function on my calculater to give them some kind of estimate.

Now, with Timing, Architect Inger is back in charge. I can tell you how long it takes me to write and edit an academic paper: 26 hours (not including analysis time). Editing a whole book in Grammarly? 49 hours. Putting together material to run a workshop? Between 3 hours (lecture) and 37 hours (new half-day workshop). How long do I spend blogging? 2 hours a week, on average. Crucially, every single project I commit to represents at least a 30% ‘overhead’ of ‘enabling work’ -email, paperwork, meeting, phone calls, etc. This work is unavoidable, as my friend Dr Ben Kraal says: ‘It’s the work you do in order to do the work you do’.

Going back to the sad story of the lecturer at Cardiff, in the fight against the perverse effects of neo-liberal management, is collecting our own data is a weapon? Or, maybe, I am only handing my employer a loaded gun…? What do you think? Are you already succumbing to the overwork scourge? Have you tried to push back on unrealistic time expectations? Have any other tactics to share?