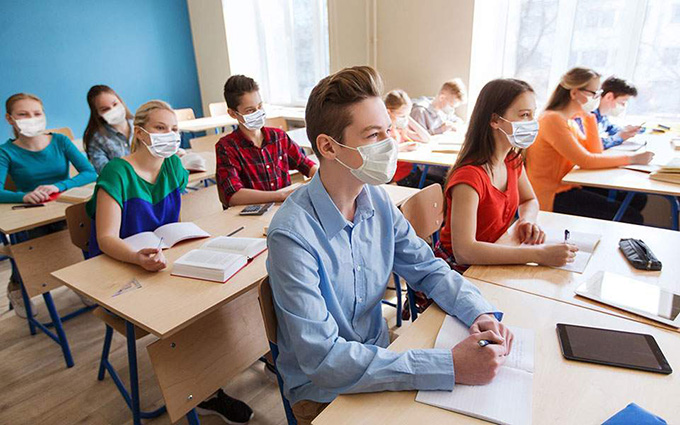 The mandatory use of the mask was published in the BOE in May 2020, three months after declaring the start of the pandemic caused by Covid-19. It also included children from 6 years of age, and was recommended for the little ones.

This imposition was maintained at the beginning of the school year, although the safety distance could be respected.

The situation supposed a social change between the students of different studies, to meet again under conditions not previously lived. After a very harsh confinement without the possibility of even going out to the street in the beginning, we found ourselves facing a disconcerting situation.

From the teacher’s point of view, the creation of conditions that favored learning were conditioned by a very different and unknown context.

Furthermore, the uncertainty made it impossible to plan the medium and long term of the different actions to be carried out. Until the entire educational community managed to enter into a strange and extraordinary new routine of hygiene, shifts, distances, unexpected confinements, telematic meetings, recesses in separate courtyards and masks, this planning could not be carried out.

Reflection now that the course is over

It is complex to think about how the use of the mask has been able to influence the learning processes and emotional, socio-affective, motor and cognitive development of students without detaching it from the rest of the conditioning factors of this course. Even so, it is necessary to stop and think about what could have affected, now that the course has ended, not only the students, but also among the teachers and in the relationship with the educational community.

Keep in mind that children under the age of six have not had to wear a mask. Certainly, his ability and maturity to be able to put on and take off the mask autonomously, to maintain it over time, etc. it was clearly limited and the recommendations did not make it essential.

This was indicated by the Spanish Association of Pediatrics , which stated that correct use before five years of age was complex. In this case, especially, it must be taken into account what it implies not only for children to wear a mask, since it was not imperative, but that they had to be worn by teachers and other educational references in schools.

At this age, boys and girls begin to internalize their body scheme and for this, among other things, the drawing of the human figure is worked on. It is at least curious how those students who made a good recognition of their own body also incorporated the mask as a necessary element of the body scheme, even if they and their peers did not wear it.

In fact, it is necessary to bear in mind that from 6 months of age, and especially from one year on, the social reference begins to be taken into account and the ability to use and recognize emotional expressions begins to develop. On the other hand, in the ages corresponding to second cycle pre-school education (3, 4 and 5 years), the consolidation of speech takes place, which begins to fully develop at 24 months.

To do this, from 12-18 months, babies pay more and more attention to the movements of the lips and the babbling, the first words, holophrases are completed .

It is also true that there is still not enough scientific evidence to be able to determine whether this subjective perception of education professionals is corroborated in a greater difficulty in the development of oral communication skills of boys and girls.

In those older than six years the situation has been different. Masks became mandatory, as recommended by WHO and UNICEF based on different factors, but the case of children with a developmental disorder or disability that could interfere with the use of the mask was excluded from the norm. And it is important to highlight this aspect that seemed only a nuance.

In the same way that exceptions were established for exits in confinement in the case of people whose health (physical or mental) required it, the same was also done with the obligation to wear a mask. All those children (and adults) with certain difficulties have seen communication seriously compromised, already difficult in some disorders such as autism. It should be noted that we are talking about communication and not just language. In fact, that their interlocutors wear a mask has also affected communication with the environment.

And what to say about those students with hearing disabilities, in the process of acquiring sign language or not, due to the obvious barrier that the mask has posed when reading lips.

Although there is little scientific evidence to respect for the recency of the situation and prioritization of other aspects to be evaluated, include the study conducted Ashley Ruba , University of Wisconsin-Madison, published in the journal Plos One , who put It shows that the masks do not prevent children from capturing the emotions of facial expressions, taking a sample of 80 children between 7 and 13 years old.

Among the primary emotions, fear was the most difficult emotion to detect and to differentiate from surprise, since they both involved opening the eyes and missing the rest of the facial expression.

In England, a study still in a preliminary phase that includes a sample of 58 schools from the Education Endowment Foundation establishes that 96% of teachers were quite or very concerned about the communication and language of students, an aspect that did not concern so much in A beginning.

It seems clear that the barrier posed by the mask when reading the face as part of non-verbal communication and the great need to speak in each and every one of the communicative moments between adults and minors have been able to condition the development of skills related to communication and language, even more than the learning itself.

All this situation that we have experienced has also helped to enhance other skills, especially in teachers, but also in those students of higher courses, Secondary Education, Baccalaureate or Vocational Training who have had to make an effort to train and put into practice aspects that surely had been undervalued or taken into account at least explicitly.

In this way, it has been necessary to vocalize much more, being clear in the pronunciation of words and the different phonemes, and paying attention to both tone and intonation.

On the other hand, we have taken into account the use of facial expressions and gestures accompanying the different interventions and we have used our entire body in communication.

We have even had the opportunity to expand and modify the vocabulary used by looking for words that were easier to understand and dictate. And we have tried to minimize any noise, in the broadest sense of the term, that could interfere with communication.

As we said at the beginning, it is not only the use of the mask that has been able to condition the learning processes, but also social isolation and the obligation to avoid contact.

In the absence of more research, the mask alone should not have as much impact as other added circumstances that have limited interpersonality and being together, the absence of contact (touch) as a sense of communication. And that, as in everything, has also allowed us to work on other learning and the enhancement of other skills necessary for full development in all areas.

Tags: teaching in a mask