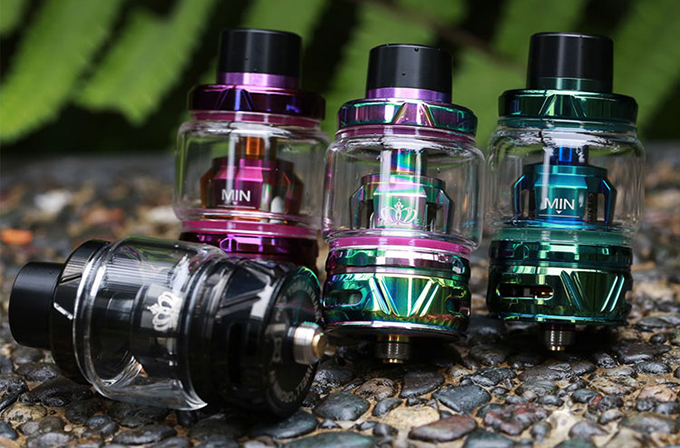 The next time you buy some vape gear from E-Cigarette Empire, take a moment to appreciate how far we’ve come in the past decade. This is the history of vape tanks.

The earliest type of self-contained e-liquid storage solution for e-cigarettes was the cartomizer, so called because it combined a cartridge for e-liquid storage with an atomizer coil necessary to vaporize the e-liquid. It was possible to refill cartomizers, but they didn’t hold a significant amount of e-liquid.

The Replaceable Coil Tank or Glassomizer

A replaceable coil tank or “glassomizer” was an inexpensive vape tank to own because the tank’s metal and glass components were permanent; the user simply had to twist the atomizer
coil out periodically and replace it with a new one. Although atomizer coil technology has come a long way since then, today’s vape tanks still operate in much the same way.

People loved the new glass vape tanks right from the beginning, but those tanks did have one shortcoming in that they didn’t produce as much vapor as many would have liked. So, the
vaping product manufacturers of the world began to work on that problem with the goal of developing tanks with better vapor production.

An early sub-ohm tank typically had a resistance of around 0.5 ohm, but manufacturers didn’t stop there. They continued to develop lower-resistance coils with ratings as low as 0.15 ohm and sometimes even lower.

Although the first sub-ohm vape tanks produced dramatically more vapor than the previous generation of tanks, the cloud chasers of the world still wanted tanks with even better vapor production. People who wanted enormous clouds could buy rebuildable atomizers and build their own coils, of course, but building a coil from scratch wasn’t nearly as easy and convenient as swapping out pre-built coils in a vape tank.

For a while, vape product manufacturers improved the vapor production of their tanks by simply adding more mass to the heating wires. Manufacturers did that by using higher-gauge wires or by building coils made from many individual wires. Eventually, manufacturers built high-end tanks with coils that had as many as 12 internal heating wires. Finally, the cloud chasers of the world had enormous vapor production at their fingertips.

Cloud chasing coils with multiple wires, however, had a problem in that they required extremely powerful vaping devices in order to operate properly. A coil with 12 heating wires, for example, required a device that could operate at well over 100 watts.

People wanted vape tanks that could produce big vapor clouds without requiring high operational wattages, and manufacturers solved that problem by inventing the mesh coil. By
replacing the traditional wound heating wire with thin metal mesh, the manufacturers invented a new type of tank that could produce impressive vapor clouds with much more reasonable wattage requirements. To date, the mesh coil remains the most modern development in the world of high-end vape tanks. Today’s best vape tanks still use mesh coils.

Until recently, vaping product manufacturers focused most of their energy on creating tanks with bigger vapor production. They paid little attention to the smaller e-cigarettes that beginners usually used – but that began to change with the development of the first pod vaping systems. Today, there is no question that pod systems are the best vaping devices for beginners.

In a traditional vape tank, the tank’s atomizer coil is the only replaceable component; the tank itself is permanent. A vape pod, on the other hand, is a plastic e-liquid enclosure that’s entirely disposable. Some vape pods are pre-filled – you use them until they’re empty and throw them away – and some are refillable.

Since vape pods are plastic rather than glass, they can be any shape and are often very small, light and thin. Vape pods have enabled the creation of extremely small and portable vaping devices that beginners love. Some owners of larger vaping devices have even switched to pod systems and now enjoy a vaping experience that’s incredibly convenient and discreet.