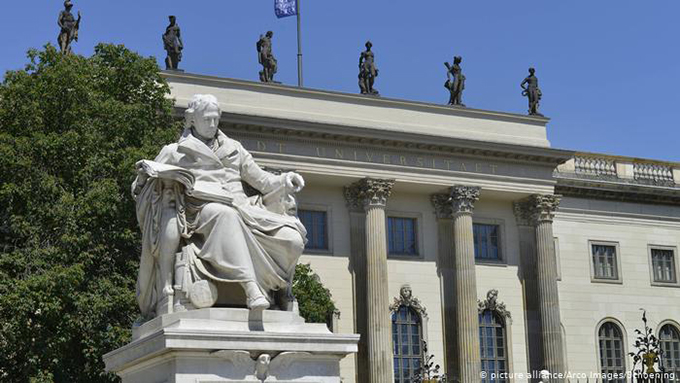 Historians are often disappointed when they look closely at the foundational documents of the Humboldt University of Berlin. Many expect to see lengthy treatises on the “unity of research and teaching” from its spiritual founder, Wilhelm von Humboldt, particularly in the short memorandum he wrote in 1809 or 1810 after the institution’s formation in 1809 by Friedrich Wilhelm III of Prussia.

But Germany’s most famous education official never uses the term, even in the document that many take as a blueprint for the research-intensive universities that were subsequently established across the world. Since his position has been misrepresented and misappropriated, it is necessary to look closely at what he wrote.

Humboldt maintained that the “goals of science and scholarship are worked towards most effectively through the synthesis of the teacher’s and the students’ dispositions”. It was never a requirement that all academics should both teach and research. University teaching was “not such a strenuous affair that it should be regarded as a distraction from the calm needed for research and study”, but Humboldt also observed that “at every large university there are always some men who teach little or not at all and who devote themselves entirely to solitary study and research”.

Humboldt’s belief in the teacher-researcher ideal has been a powerful myth, cited whenever separation of the two roles is mooted by university management. Ironically, the ideal did not apply at most German universities in the 19th century. Indeed, by 1900, it was regarded by many – notably in the natural sciences – as detrimental to research. As a result, Germany and, later, France and the US began to establish research institutes independent of universities.

The reasons are fairly self-evident. As noted by the sociologist Max Weber in his 1917 lecture Science as a Vocation, the qualifications for the roles of researcher and teacher are not identical (Weber attended Humboldt’s institution and also taught there when it was named the Friedrich Wilhelm University of Berlin; it was only renamed after Humboldt and his polymath brother, Alexander, in 1949).

“A person can be a quite outstanding scholar and a dreadfully poor teacher,” said Weber, unkindly citing, as examples, the physicist Hermann von Helmholtz and the historian Leopold von Ranke.

In a 1996 article in the journal Review of Educational Research, Australia-based educationalists John Hattie and Herbert W. Marsh also concluded that the “common belief that research and teaching are inextricably entwined is an enduring myth” after reviewing 58 studies conducted between 1950 and 1990.

Carl Jung’s theory of the psychological types of the extrovert and introvert is relevant to this discussion. The Swiss psychiatrist’s observations on how introverts turn their psychic and intellectual energy inward is something many scholars would identify with. Some might even see this mentality as ideal for the rigours of independent research. Of course, introverted academics can be adept teachers, while extroverts can be outstanding researchers, but it is not too simplistic to say that, in general, introverts prefer research and extroverts prefer teaching.

That theme is borne out by a study of Canadian psychology professors in the mid to late 1970s, published in 1983 in Scientometrics. It found that the personality characteristics of effective teachers were diametrically opposed to those of effective researchers. Perhaps surprisingly, it also found that personality type had little impact on a scholar’s ability or appetite to lead.

Such critiques of the Humboldtian ideal, however, have failed to dampen enthusiasm for it. But the proliferation of short-term teaching-only or research contracts in recent times suggest institutions are drifting away from it. Perhaps the flourishing of research-intensive universities in the US has shown that such separation can work.

With tertiary education participation rates exceeding 50 per cent in many countries, a more robust interrogation of the Humboldtian principle is urgently needed – particularly as teaching has unquestionably become a “strenuous affair” for many academics.

We should not use a long-held myth to insist that academics should always be both teachers and researchers. Acknowledging the flimsy historical basis for the Humboldtian ideal would be a good first step in reorientating higher education so it can better serve the interests of students and staff alike.

Author Bio: John Dreijmanis is a retired political scientist who most recently taught at the University of Bremen.